Please ensure Javascript is enabled for purposes of website accessibility
Log In Help Join The Motley Fool
Free Article Join Over 1 Million Premium Members And Get More In-Depth Stock Guidance and Research
By Anders Bylund – Jan 24, 2014 at 10:13AM

Xerox shares have been crushing the market recently. Only matching analyst targets in the fourth quarter wasn't enough to support the stock's soaring prices.

Shares of Xerox (XRX) were trading as much as 3.9% lower in early market action following the pre-market release of fourth-quarter results.

The document management expert reported adjusted fourth-quarter earnings of $0.29 per share on $5.6 billion in revenue. The figures were down from $0.30 per share and $5.9 billion, respectively, in the year-ago quarter and exactly in line with analyst estimates.

Looking ahead, Xerox guided non-GAAP earnings in the first quarter to roughly $0.24 per share, again in line with Wall Street projections. Management also reiterated its guidance for the full 2014 fiscal year with a midpoint 4% ahead of analyst targets.

"We managed anticipated headwinds while continuing to build our business by investing in growth markets such as health care and graphic communications, and expanding Services internationally," said Xerox CEO Ursula Burns in the earnings press release.

In other news, Xerox also announced its next quarterly dividend, raising the payout by 8.7% to $0.0625 per share. The dividend is payable in April as usual, but the announcement came about a month earlier than the same payouts in recent years.

The negative market reaction takes the edge off an impressive run, where Xerox shares set an annual high last week after gaining 70% in 52 weeks. 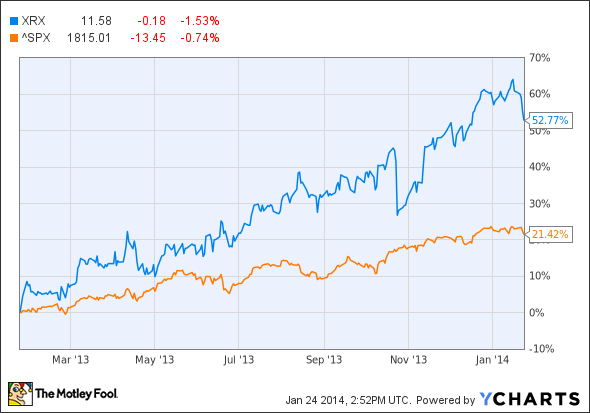 Fool contributor Anders Bylund has no position in any stocks mentioned, and neither does The Motley Fool. We Fools may not all hold the same opinions, but we all believe that considering a diverse range of insights makes us better investors. The Motley Fool has a disclosure policy.

As Xerox Walks Away, HP Faces an Uncertain Future
356%