Please ensure Javascript is enabled for purposes of website accessibility
Log In Help Join The Motley Fool
Free Article Join Over 1 Million Premium Members And Get More In-Depth Stock Guidance and Research
By James Brumley - Jun 23, 2020 at 8:45AM

People were already printing less than they have in the past, but working at home has proven just how unnecessary many paper documents are.

Although the advent of the personal computer and corporate networking a couple of decades ago was supposed to usher in the era of a paperless office, that didn't actually happen at the time. Indeed, those tools (and ever-cheaper printers) seemingly gave employees and consumers an unprecedented capacity to print pages, which they increasingly used all the way through 2012. Printing icons like Hewlett-Packard -- you know it better as HP (HPQ -0.39%) -- and Xerox (XRX) rode that wave to printing riches.

In 2012 though, personal habits finally caught up with technologies that negated the need for physical copies of documents. The world's number of printed pages started to decline then and is expected to continue shrinking into the indefinite future.

The coronavirus contagion that's kept millions of workers at home for weeks likely accelerated the downtrend of the world's need for printed pages. While technology market research outfit International Data Corp. (IDC) expects a slight rebound in printer usage next year before the decline is rekindled in 2022, that temporary optimism may underestimate just how well workers have retrained themselves to work without using a printer. 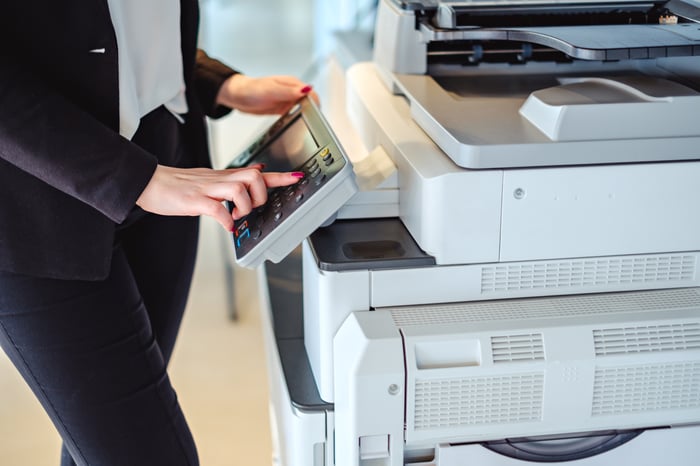 To answer the most burning question first: 3.2 trillion. That's how many pages the world printed in 2019, according to estimates from IDC. That figure's fallen an average of 1.2% every year since 2015. But the number is expected to fall much faster this year, tumbling 13.7% to around 2.8 trillion. The need for printed documents is radically diminished when you can't physically hand that piece of paper to a co-worker. IDC believes we'll see a reflexive rebound in printing next year, just because this year's apt to see such a sharp dip in its print tally. But through 2024, the anticipated decline in printing stands at an average of 4.8% compound annual growth rate (CAGR) through 2024. People, it appears, are learning to live without as many printed pages.

The tide obviously works against any company within the printing business, whether that organization makes printers, or the toners and inks needed to keep them working. None are hit quite as hard as the two aforementioned printing stalwarts, though: Xerox and HP.

Xerox is the most vulnerable for the obvious reasons -- it's the purer play. While it's tiptoed outside of conventional page printers for the office or home and now provides higher-level tech solutions like customized printing and digital document sharing, its core business is still printing, which the world just doesn't need like it used to. The company's got six consecutive years' worth of shrinking revenue to support that premise, and analysts see more deterioration ahead. 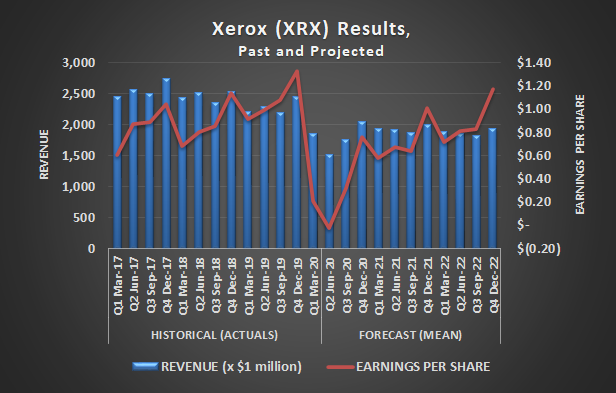 Those same analysts expect earnings to hold steady once they normalize following the COVID-19 pandemic. But the downward trajectory of sales could make that profit recovery a tough trick to pull off.

Hewlett-Packard, or now HP, isn't nearly as exposed to the decline of printing, though it's still more than a little exposed. Of last year's $58.8 billion worth of revenue, $20.1 billion of it (or 34%) came from its printing business. In the meantime, it's not as if the computer business that makes up most of the other two-thirds of HP's business mix has been firing on all cylinders. 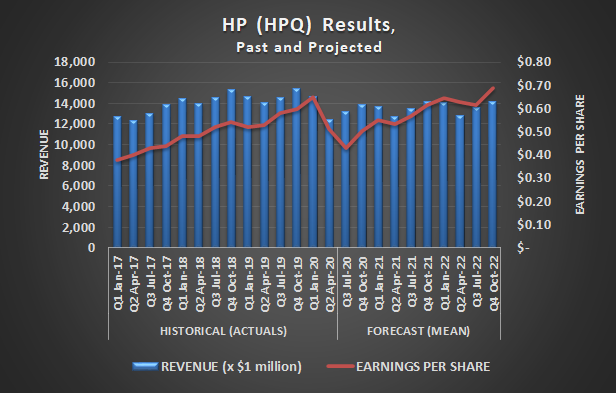 Like Xerox, the income growth projection is suspect in light of the fact that it's not likely to be fully matched by sales growth.

Given the undertow of waning printer usage, Xerox's previous interest in a merger with HP makes sense. Alone, not even the two big titans of the business may be able to push through the challenge until paper-based printing at least stabilizes. Together, the combined companies might figure out a way to help one another survive.

Xerox's hope in that regard is only half-supported by the reality of the situation. Melding the two companies into one may not create much more in the way of operational efficiency, as both outfits run rather lean already. And, even if fiscal advantages were achieved by pairing HP and Xerox, the united organization is still fighting the same printing headwind. For such a merger to work well enough, a whole new kind of product or solution would need to be introduced.

In the meantime, IDC Japan's group manager Eiji Ishida put the matter in terms that should worry HP and Xerox by clarifying International Data Corp.'s findings:

"The decline of office print volume will have a big impact on total spending in the office print market. Hardcopy peripherals vendors will be required to make bold changes to their strategies based on future work styles in the next normal following the pandemic."