Please ensure Javascript is enabled for purposes of website accessibility
Log In Help Join The Motley Fool
Free Article Join Over 1 Million Premium Members And Get More In-Depth Stock Guidance and Research
By James Brumley - Mar 12, 2020 at 7:45AM

Investors in the printer and computer name have remained as disinterested in the merger deal as HP's board has been.

Following through on promise/threat it made back in November, struggling photocopier company Xerox (XRX) finally took its acquisition case directly to HP (HPQ -1.17%) shareholders last week, rather than continuing to try and negotiate with HP's stubborn board of directors. The so-called hostile takeover attempt now underway is rooted in the belief that the computer and printer brand's investors are more interested in the offer than HP's board suggests.

Perhaps that is indeed the case. If they're really hoping for a merger though, HP's crowd of investors has been strangely quiet on the matter despite plenty of opportunities to voice their wishes to the board of directors.

It may not be the price that's holding them back. There's little doubt that combining the companies will improve efficiency, either. Arguably, any holdup may actually reflect the lack of a compelling argument that these two companies -- once combined -- can do anything other than slow their own demise. Xerox needs to show HP's shareholders something with a "wow factor" that can only be realized by melding the two organizations into one. 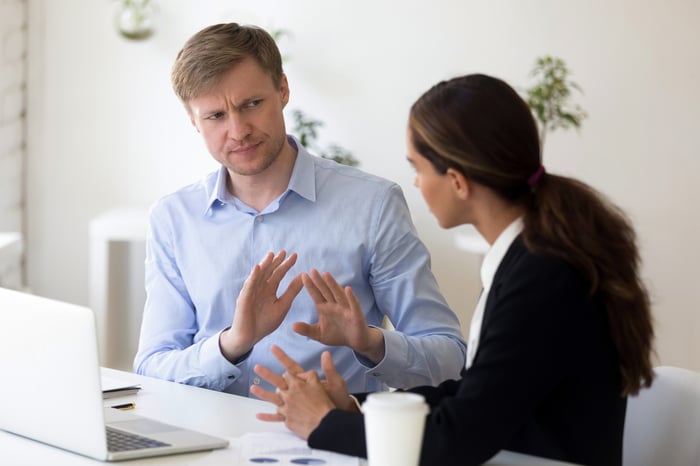 Go back and take a closer look at all the written arguments Xerox's CEO John Visentin has penned that tout the upsides of the proposed deal, and you'll see that something's missing.

Sure, Xerox believes it can extract $2 billion worth of financial synergies from a merger, and it further believes the combination of the two companies would make the new organization a force to be reckoned with. Xerox has a strong direct sales team, and HP has good relationships with third-party sellers. The two companies jointly would also address nearly every single piece of the printing market, making it the go-to name for most businesses of all sizes.

It's not as if HP and Xerox are competing head-to-head on many fronts as it is, though. And, while $2 billion worth of synergies is nothing to dismiss, as HP's CEO Enrique Lores noted in writing back on Nov. 24, "it appears that your assumptions include significant savings that are already included in each company's independently announced cost reduction plans."

The piece that's missing is the proverbial "killer app."

It's a term that's been tossed around within the technology world as well as by investors for a few years now, perhaps a bit haphazardly. If you're not familiar with the idea, a killer app is a piece of software -- or an app -- so game-changing and so powerful that it can drive sales of the very device it's meant to be used with. In a broader sense, the term's been used to describe all sorts of technology that's ushered in sweeping change.

If it's got one in mind, Xerox has yet to divulge any killer app it's got planned for its proposed union with HP.

It's possible Xerox has such an idea in mind, but it is hesitant to make it publicly known for fear of another tech name stealing the idea.

Possible, but not likely.

More plausible is the prospect that the acquisition attempt is no more and no less than what it seems to be on the surface: A combination of two fading companies that might be able to slow the pace of their respective retreats.

Even noted investor Carl Icahn, who holds major stakes in both companies, perhaps inadvertently deflated the case for any dealmaking when he commented in November, "I've found over the years that these types of companies that are in shrinking industries tend to decline much more slowly than many markets participants may predict, while continuing to generate substantial amounts of cash." He's not wrong, but if that's all this is, it's not enough. Both companies may be able to create more shareholder value by shopping around for a partner with more of a killer app in mind -- if such a creative partner is out there.

And there's the rub. Neither Xerox nor HP have to come up with a device as revolutionary as the iPhone, which started smartphone mania, but they do need to come up with something game-changing. If the case for a merger is purely one grounded on financial engineering and a combined sales force, Lores is right -- HP doesn't need Xerox interfering with a turnaround plan rooted in printer ink subscriptions and 3D printing ... at least not now.

I argued in early December that continued pressure from Xerox on HP to do a deal may provide a near-term boost in HP's stock price, but would do little to create a more valuable entity if the merger were to take shape. Nothing's changed in the meantime, except for a slightly better offer from Xerox.

Ergo, my thesis hasn't changed. Take the money and run if it looks like Xerox is going to force the merger the hard way now that the easy way is off the table. For better or worse, Bernstein Wealth Management analyst Toni Sacconaghi probably still has the most apropos analogy for the saga, comparing the merger effort to two garbage trucks colliding. Such a collision would be spectacular to watch, but it's nothing you'd want to be involved in.