Many businesses use the razor-and-blade model of giving away the razor and marking up the price on the replacement blades, but few have managed to gouge customers quite as exquisitely as printer companies.

HP (NYSE:HPQ) is the biggest printer maker, and has virtually given away its printers so it could greatly make up the difference selling ink and toner. But with the need to actually print out a hard copy significantly lessened these days, HP is finding the business is not as profitable as it used to be, and it is ready to shake up the industry with a new model. 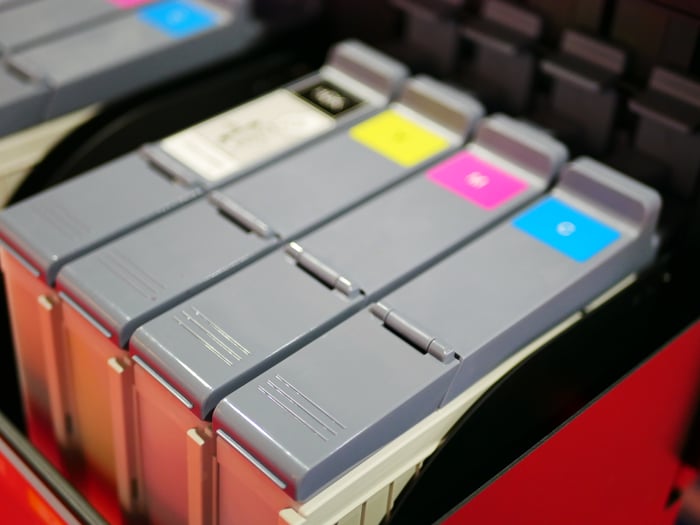 Sales for both HP printer supplies and consumer hardware have been in decline in recent quarters. In its fiscal fourth quarter, which ended in October, HP reported printing revenue was down 6% year over year with operating margins of 15.6%, down from 16% last year. For the full year, net revenue is down 4%, suggesting the slide is accelerating.

Part of the decline has been due to third-party supplies, to which HP responded with a new targeted marketing campaign highlighting the quality, sustainability, and security of HP supplies, a move it expects will gain traction in 2020. But with the price of printers so low and the cost of consumables so high, it's almost more cost effective to throw out your printer when you run out of ink and buy a new one. In fact, I did throw out my printer several years ago, but never replaced it.

My needs for printing have dried up as quickly as an inkjet cartridge, so if I do need a hard copy of a document, I use EFI's PrintMe service. You upload the document to the cloud and print it out at one of thousands of locations worldwide, such as a Staples, Office Depot, hotel, or university, making it a far more cost-effective printing solution.

HP has sought to offset that by offering subscription-based models, like Instant Ink, which it launched in 2013, which allows consumers to have ink delivered before they run out. The monthly fee is based on the number of pages printed, not the amount of ink used, so for high-volume users, it could be a worthwhile option.

The tech company said its contractual business for services like Instant Ink was up double digits in the fourth quarter, but that's not going to be enough to make a difference. As the market leader in printers accounting for two out of every five printers shipped, it needs to do something bold.

While consumers will still be able to buy a dirt-cheap HP printer, they won't be able to use just-as-cheap consumables in it. The printers will accept only official HP supplies. If you want to use third-party consumables, well, that's going to cost you. HP is going to raise the cost of printers that accept outside vendor supplies.

It's basically the model used by mobile phone manufacturers. If you want to bring your own service and buy an unlocked phone, it's going to be more costly than buying a locked phone and staying in the provider's network.

It's a risky strategy for an industry that has relied upon the razor-and-blade model for decades, particularly for HP, as there is no certainty that it will resonate with consumers or that other printer makers will follow HP's lead.

If the printer industry balks, HP will be the one with what look like higher-cost machines on store shelves. Total cost of ownership doesn't often fly with consumers, who are often looking only at base prices.

It certainly won't be a quick turnaround for HP's printing business, as it will take time to educate consumers. If it works, it could make the printing business profitable again, but if it doesn't, HP could be see its stock plunge once again.