Maybe Wall Street has committed the same error most individual investors have: presuming the company's tepid results since -- and even before -- its 2015 split with the organization now known as Hewlett Packard Enterprise were a permanent problem, leaving the company no path to back to growth. That's not necessarily the case, though, and given the stock's single-digit earnings multiple, the risk to investors looking to take that shot is minimal.

Activist investor Carl Icahn's new effort to push forward Xerox's (NYSE:XRX) bid to acquire HP could be the nudge needed to draw attention to how undervalued HP is at the moment.(NYSE:HPE)

Just a few years ago, HP was the market-share leader of the personal computer arena. It's also still the preferred name in printers. Neither market is what it used to be, though. HP's printing division has seen dwindling revenue for three consecutive quarters now, and while personal computer sales are finally on the mend from a lull that first began in 2011, Lenovo Group has taken the lead in that market.

A glimmer of hope has started to shine through. IDC reported in October that PC shipments were up 3% in the third quarter, growing for a second quarter in a row. HP led the charge with a 9.3% year-over-year improvement, inching closer to reclaiming its former spot as the market leader. 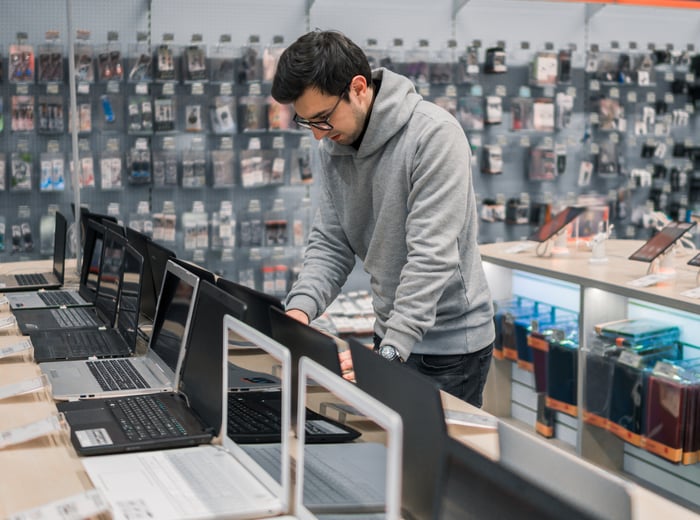 The patch of strength could be a fluke poised to reverse back into a modest downtrend through 2023, according to a separate report from IDC published in September. But, there are some noteworthy nuances about the industry's current results and future headwind. HP's personal computer sales grew faster than any other name last quarter -- far outpacing the rest of the industry's growth -- and the bulk of the demand within the market is being driven by so-called "2-in-1" devices and "ultraslim" options that tend to favor HP's offerings.

TechRadar, for instance, recently named three HP devices among its top 10 2-in-1 choices for 2019. While it has fewer entries in the ultraslim (ultraportable) category, TechRadar also named HP's Spectre x360 and the Envy x360 among its top recommendations.

Weighed down mostly by doubt

Despite reason for more optimism, the market hasn't been particularly bullish of late. Shares are still down by more than 25% from their October 2018 peak, even with the bounce from this October's low, and the trailing P/E of 7.4 is unusually cheap compared to other technology stocks. Earnings growth of nearly 10% projected for this year and sales and profit stabilization forecasted for next year just haven't compelled investors despite the stock's low cost. 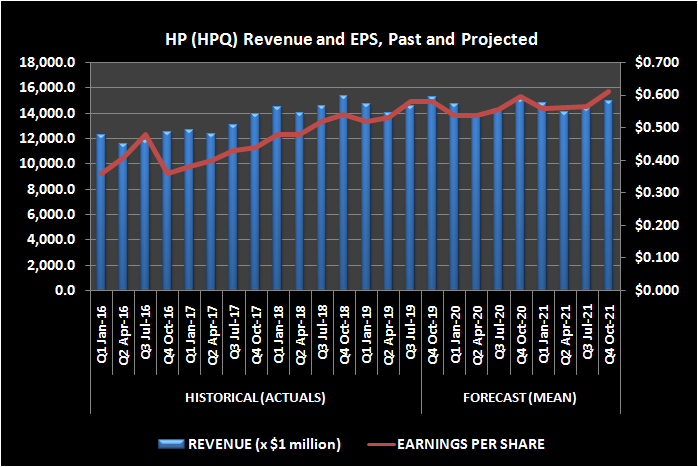 It's difficult to blame them for hesitating. The consensus analyst rating on HPQ right now is barely better than a hold, while the stock's present price of just above $20 is actually a few cents above the consensus target.

Goldman Sachs analyst Rod Hall also made a cogent point about the company when he downgraded its stock to a sell last month, cautioning, "we see significant risk to printing profits as the supplies business continues to deteriorate."

This is a case, however, where a single-digit P/E for a blue chip stock suggests investors (as well as analysts) may have read too much into the rhetoric. Challenges certainly remain, particularly when it comes to printers, but the doubts surrounding the stock are arguably overbaked.

Merging two struggling organizations operating in the same space into one operation isn't necessarily a recipe for success. Synergies and effective cross-usage of technologies aren't always guaranteed, and it remains to be seen what HP and Xerox could do together that they can't do on their own.

Carl Icahn made a valid point, though, explaining, "I've found over the years that these types of companies that are in shrinking industries tend to decline much more slowly than many market participants may predict." He added that HP could use a little bit of activist involvement.

Somehow, that doesn't seem wrong. HP appears to be on the cusp of a return to meaningful growth. It just needs the right tweak, or new product. Xerox may or may not be that tweak, and the new product that could materialize is anybody's guess. However, if Xerox sees enough potential to show buying interest at HP's present value, perhaps investors would be wise to take the hint. The merger wouldn't even have to happen to firm up the stock's perceived value.