As Americans worry about the reach of the NSA and privacy concerns, a policy enacted as part of the Energy Independence Act of 2007 under the Bush Administration will extend its reach into every American household this year. A recent poll showed that only 40% of Americans are even aware of it. Luckily, strict light bulb standards are nothing to fear. In fact, they can save you a lot of money.

The Energy Independence and Security Act of 2007, signed into law by George W. Bush, called for a radical modernization of the nation's energy infrastructure. It was designed as a roadmap for funding and developing technologies in renewable fuels, more efficient buildings, and carbon capture and storage that could achieve efficiency targets for federal, commercial, and residential buildings and products. While updating and expanding the controversial Renewable Fuel Standard or setting energy consumption targets for commercial buildings enraged groups across the country citing the government's overreach, nothing compared to the uproar caused by a tiny section of the legislation that allowed the government to reach into every citizen's home.

While the government policy began invading homes in 2012, it couldn't penetrate every American household until the beginning of this year. Only 40% of you reading this even know about it, according to a recent poll. Worse yet, Uncle Sam will only expand his reach in the next several years. What's the controversial topic, you ask?

The act calls for all screw-in light bulbs to use 25% less energy than their power-equivalent predecessors on a carefully orchestrated timetable. All 100-watt light bulbs were required to meet the new standard in 2012, while 75 W light bulbs followed in 2013. This year all 60 W and 40 W light bulbs, the most common light sources in North America, will need to become 25% more efficient. Since incandescent bulbs cannot meet the standard, the act essentially serves as a ban on their production.

While the new rules will greatly reduce the amount of energy consumed in the United States, especially considering the simplicity of the standards, not everyone is enthusiastic about the change. A survey conducted by Osram Sylvania, one of the world's largest lighting suppliers, found that 30% of consumers planned to hoard incandescent bulbs while they're still on store shelves. Are Americans justified in their act of defiance?

It may be difficult to believe, but the issue of light bulb manufacturing has become a highly controversial and politicized topic. Are the promised gains in energy efficiency for American households real? Should Americans embrace more efficient light bulbs, such as CFLs and LEDs, or cling to their more familiar incandescent bulbs? Let's explore the history of innovation of the light bulb and analyze how much money modern lighting options could save your family -- and the country.

Tell me something I don't know about boring light bulbs.
Light bulbs have come a long way since Thomas Edison filed his first patent in 1879. The first carbon filament utilized uncoated cotton and lasted 14.5 hours, but upgrading to a bamboo filament just one year later, in 1880, allowed his light bulbs to last up to 1,200 hours. That enormous leap -- along with Edison's numerous inventions ranging from electric conduits to electric meters -- made light bulbs more practical for everyday use and marked the beginning of the end of kerosene lamps.

While increasing the lifetime of light bulbs was a major advancement, increasing their energy efficiency proved to be more difficult. By the 1950s scientists had still only managed to turn 10% of the energy reaching an incandescent bulb into light. It wasn't until the 1973 oil crisis that researchers created a more energy efficient fluorescent bulb for household use, although the bulbs didn't gain much market traction until the 1990s.

Why is the government telling you how to light your home?

It all comes down to efficiency. The Department of Energy estimated that Americans were using 971 million 60 W incandescent bulbs in 2010. Sure, improvements have been made, but the technology is surprisingly similar to Edison's bulbs from 130 years ago. If the technology that can enable greatly reduced energy consumption exists, why should our country use anything else?

America can also reap significant benefits in energy consumption for making the relatively simple switch. The DOE estimates that the more than 49 million LEDs installed across the country in 2012 save the nation approximately $675 million in energy costs for the year. Therefore, replacing every incandescent bulb in the country with a current generation LED bulb could save the country $13.5 billion in electricity costs every year. Fast forward 10 years to even more efficient LEDs (see below) and the savings swell even more.

Who benefits from the new, strict standards?
Several companies supplying metals used in new LED bulbs, or the bulbs themselves, also stand to benefit. Let's quantify the opportunity to really appreciate it. Consider that an estimated 1.1 billion incandescent bulbs were sold in North America in 2011, but that number is expected to drop to just 200 million this year, according to IMS Research. The number will fall further when Canada resumes its own light bulb efficiency standards.

Who stands to benefit the most? Perhaps the two easiest picks are chemical manufacturer Albemarle Corporation (ALB 1.32%) and LED bulb manufacturer Cree (WOLF 1.02%). Albemarle supplies high-purity metal organic products that are needed in the production of LED and OLED products, as well as other consumer products and even solar cells. While the segment is an important part of the company's business, LED technology is Cree's business. The company has taken full advantage of the government's new standards in 2012 by growing total revenue 40% in the past two years. Shares have nearly tripled over the same period, but a few disappointing quarters last year led to major collapses. Cree remains a volatile play in 2014 even with the end of the 60 W incandescent bulb.

Of course, everyone benefits from the new standards. Lighting your home makes up about 10% of your annual electricity costs. Switching out incandescent bulbs with energy efficient LEDs could drop lighting costs to just 2% of your overall electricity cost -- and the bulbs last up to 25 times longer. 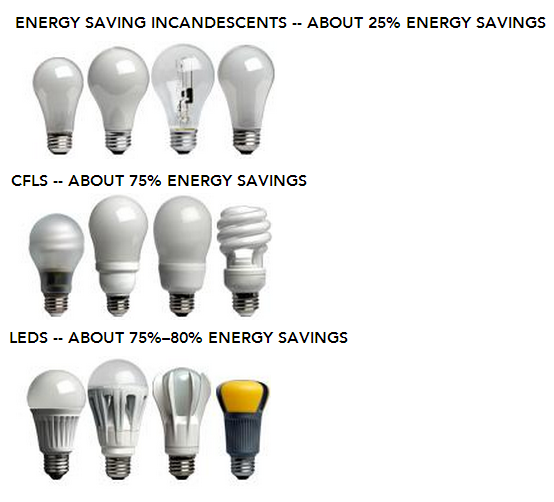 Are LEDs the perfect bulb?
Not quite, but researchers have made some spectacular gains in recent years. LED bulb costs have dropped over 85% since 2008, while they are six to seven times more efficient, use 80% less energy, and can last 25 times longer than incandescent bulbs. Research sponsored by the DOE will allow LED bulbs sold in 2025 to be 87% more efficient than the most efficient variety sold today -- and 33% efficient overall.

What would the perfect light bulb look like? We can measure the efficiency of a light bulb by dividing the amount of light emitted by the power needed to produce the light. This metric is also called luminous efficacy and has units of lumen/watts, or lm/W. Take a look at how the three most common types of light bulbs stack up against the theoretical perfect light bulb.

The shift in light bulb technology should also shift how consumers approach light bulb purchases. In the past, with incandescent bulbs, it made sense to buy lighting based on power (watts). A bulb with more power generally produced brighter light. That doesn't quite fly with CFL or LED bulbs, which can produce the same amount of light -- or more -- with a fraction of the power. Today, consumers should purchase light bulbs based on brightness, or the number of lumens.

Despite being just a small piece of the Energy Independence and Security Act of 2007, the new light bulb standards will go a long way in reducing the nation's energy consumption. Not everyone is thrilled that the government wants to clamp down on incandescent bulb usage, but it seems awfully silly to use technology that dates back to Thomas Edison to light your WiFi-doused, HD-emboldened, smartphone-chirping home. It's also pretty wasteful. While LED bulbs do cost a little more upfront, they more than make up for their price tag with energy savings and greatly extended lifetimes. If every American made the switch to LEDs the country would save $13.5 billion each year. Do your part and install LED bulbs in your home. And thank George W. Bush while you're at it.

The Motley Fool owns shares of Albemarle. Try any of our Foolish newsletter services free for 30 days. We Fools may not all hold the same opinions, but we all believe that considering a diverse range of insights makes us better investors. The Motley Fool has a disclosure policy.