Buffalo Wild Wings, Sonic, and Domino’s have performed well despite muted spending, which makes them worth watching.

The restaurant industry in the U.S. had a depressing time in 2013 with bad weather in December and a short holiday season spoiling the party. With the economy still sluggish and consumers being very selective with respect to spending due to a cash crunch, all doesn't look rosy for the industry. It is not surprising that according to a Black Box International report, annual same-store traffic was a negative 2.1% in 2013 as compared to 1% growth reported in 2012.

However, it is not difficult to find restaurants that have managed to brave the headwinds and have come out as winners. Let's take a look at three such restaurants from the entire spectrum -- Buffalo Wild Wings (BWLD), Sonic (SONC), and Domino's Pizza (DPZ -3.12%) -- which have bucked the industry trend.

Buffalo Wild Wings' solid growth
Buffalo Wild Wings has a simple business model -- tasty food, wide selection of beers, and widely available TVs to watch sports -- that has worked well over the years. This company has had a streak of earnings beats, and it carried over the second-quarter momentum into the third quarter. Buffalo Wild Wings increased the number of company-owned restaurants by 21% compared to the third quarter last year, and same-store sales increased 4.8% at company-owned restaurants and 3.9% at franchised locations. As a result, revenue increased 27.9% versus the same quarter a year ago.

On the back of lower costs per pound for traditional chicken wings as compared to last year and strong top-line growth, earnings per share came in at $0.95. This represented solid 66.9% growth versus the comparable quarter last year. Growth in comps was fueled by partnering with Yahoo! Sports and hosting Fantasy Football National Draft Day parties.

Buffalo estimates that there's potential for about 1,700 restaurants in the U.S. and Canada. This presents a good growth opportunity going forward from its current count of less than 1,000 restaurants. In addition, it is also diversifying by venturing into pizza with PizzaRev and will be opening the first company-owned PizzaRev in the Minneapolis area in early 2014. Moreover, it also has plans to open 45 company-owned and 40 franchised restaurants in the U.S. and Canada, and internationally it expects 10 franchised locations in the entire year.

Sonic and Domino's are doing well
In the last year, Buffalo Wild Wings has clearly outperformed peers on the Street as shown in the chart below, but all three have had a good run, outperforming the S&P 500 index by a good margin. 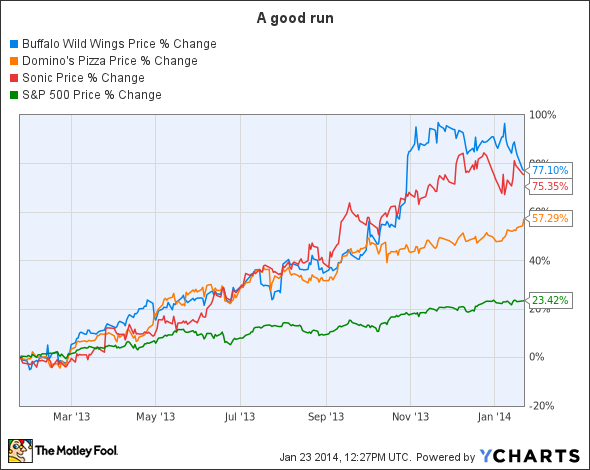 In its first quarter, Sonic reported a systemwide comps gain of 2.2%. The good comps gain at both company-owned and franchised restaurants indicates that the company's drive-in charm continues to shine. Looking ahead, Sonic is targeting around 15% growth in EPS throughout fiscal 2014. The main growth drivers will be the company's new stores and higher traffic. Sonic is installing new point-of-sale and point-of-purchase systems, which should drive sales and margins upward.

Sonic has a network of more than 3,500 stores nationally, and yet its presence in California is muted. A new franchise agreement with one of its existing partners will bring 10 new stores to California over the next seven years, with the first two to open by August 2015. This is just one small part of an overall effort to hit 300 stores in the state by 2020, and this is a long-term growth driver going forward.

Domino's Pizza reported a consolidated domestic comps gain of 5.4%, with company-owned units and franchises rising 4.6% and 5.5%, respectively. This was remarkable considering the fact that the industry as a whole witnessed a weak 2013. On the back of strong comps, Domino's reported a 6.9% year-over-year increase in revenue to $404.1 million.

Domino's has the strongest international presence, with a store count of 5,627 stores versus 4,939 stores on the domestic front. This diversity insulates it from vulnerabilities arising out of regional economic headwinds. Also, Domino's has been a pioneer in the restaurant industry for online ordering, including mobile. Domino's is at a stage where 35% of orders come in over digital means.

Takeaway
All three companies have done quite well in a muted consumer-spending environment and are targeting further growth going forward. Buffalo Wild Wings is the most impressive of the lot due to its rapid growth, while Sonic and Domino's look like more stable picks. Hence, investors looking to invest in this industry can find a stock that suits their taste among these three, and this is why these companies deserve a closer look.