Are you planning on going on a cruise? If so, you might want to read about recent at-sea incidents, including everything from capsizing to fires to norovirus outbreaks. This isn't what most people envision as a dream vacation. Fortunately, most cruises sail without a hitch. The problem is that when unfortunate events do take place, it leads to negative word of mouth and a lack of consumer trust in a cruise line's ability to keep them safe.

The incident that really put fear into people was when Carnival's (NYSE:CCL) Costa Concordia sank in 2012, costing 32 people their lives. It seemed as though this would be an isolated event, but Carnival's Costa Allegra suffered a fire soon after. A year later in 2013, the Carnival Triumph then suffered a fire that led to cabins without power, backed-up sewage, and a limited supply of food. While some passengers praised the crew's efforts to keep everyone as comfortable as possible, others stated that they would never go on a Carnival cruise again.

Also in 2013, Royal Caribbean's (NYSE:RCL) Grandeur of the Seas suffered a fire. At 2:50 a.m., the ship's intercom awoke most passengers with a voice instructing all passengers to put on their life jackets and run to the nearest deck.

These events have led to some travelers negating a cruise as a potential vacation option. Add to this recent events concerning the spread of the norovirus on Royal Caribbean's Majesty of the Seas and Explorer of the Seas and it isn't likely to help the industry's reputation. That said, Carnival is working hard to restore its reputation, and Royal Caribbean is innovating more than its peers.

If you're looking to invest in a cruise line that tends to avoid such negative headlines pertaining to safety, then you might want to consider Norwegian Cruise Line (NYSE:NCLH). However, Norwegian Cruise Line isn't the most loved cruise line by travelers -- you can read "Best (and Worst) Cruise Lines Based on Traveler Ratings" for more information -- and any dips in Royal Caribbean's stock price related to the spread of the norovirus could be looked at as a potential opportunity.

Gastrointestinal issues
We've all been there, and it's never fun. Those on a cruise would prefer to be soaking up some sun on the pool deck with a book in one hand and a drink of choice in the other. For 66 of the 2,581 passengers on Royal Caribbean's Majesty of the Seas, this wasn't a possibility. Instead, these passengers were spending the majority of their time in the bathroom, suffering from vomiting and diarrhea. Two of the 844 crew members were also affected.

Fortunately, most of those affected by the highly contagious norovirus responded well to over-the-counter medicine administered by Royal Caribbean on both cruises. 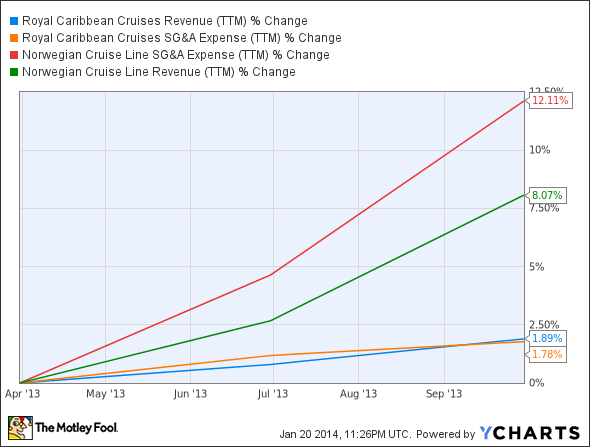 Though not by much, Royal Caribbean is growing its top line faster than its SG&A expenses. This is often an indication of quality management. Norwegian Cruise Line hasn't demonstrated such efficiency over the past year.

Carnival lags its peers in this area: 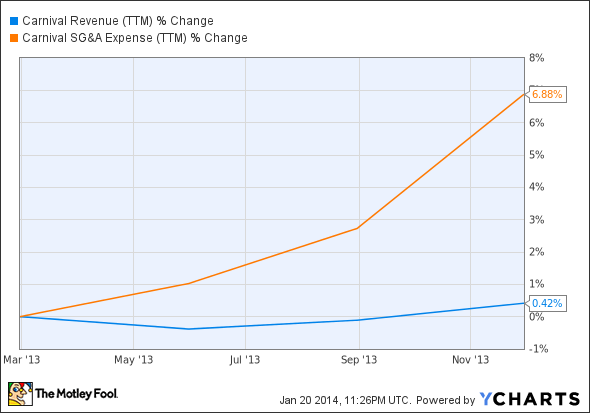 Despite Carnival trading at 30 times earnings, the underlying operation isn't impressive at the moment.

The big potential negative for both companies is that they're expensive in a consumer environment that features a hesitant consumer. If discretionary incomes were to suffer due to a weakened job market, souring investments, or rising interest rates (the latter two can go hand-in-hand), then both companies would likely suffer.

The bottom line
At-sea mishaps have led to a lot of negative publicity for the cruise line industry, but Royal Caribbean and Norwegian Cruise Line continue to sell tickets. Their at-sea missteps pale in comparison to Carnival's over the past several years.

If you're going to invest in Royal Caribbean or Norwegian Cruise Line, your concern shouldn't be about a recent onboard virus, but instead should focus on valuation and the ability of the consumer to continue to spend. At the moment, all is well. Royal Caribbean should be the best investment of the three thanks to efficiency and strong traveler ratings.