Investors are panicking over Apple's iPhone sales, which came in shy of expectations. But does that mean that Apple's story is over, or is this an opportunity in disguise?

Deja vu. That might be how some Apple (AAPL -0.29%) investors are feeling today. A year ago, Apple shed 11% after reporting fiscal first-quarter earnings with iPhone sales falling short of expectations. At the low this morning, Apple shares were down nearly $50, or 9%, after iPhone sales again came in shy. Both times, Apple set new all-time records of most of its pertinent metrics. Both times, it wasn't enough.

With shares flirting with $500 again, is it time to buy or time to panic?

The headliners
Revenue totaled $57.6 billion, which translated into net income of $13.1 billion, or $14.50 per share. The Mac maker sold 51 million iPhones, 26 million iPads, and 4.8 million Macs. Investors were expecting at least 55 million iPhones, and that shortfall is partially driving the sell-off. On the other hand, iPad units came in quite strong. 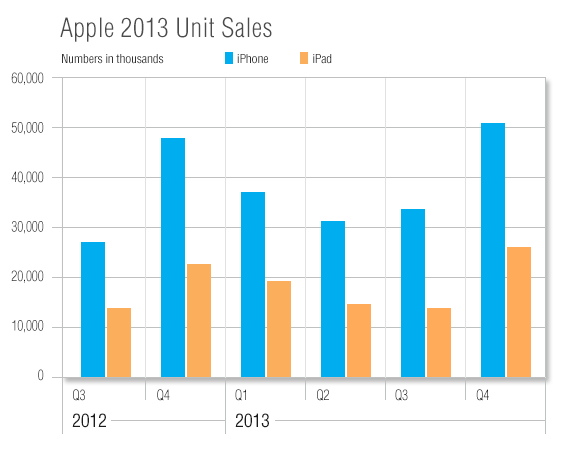 The iPhone 5s was supply constrained throughout the quarter, as were all iPads. However, Apple did exit the quarter in supply and demand balance for both iPhones and iPads, as it was within its target range for channel inventory.

Guidance for the March quarter calls for revenue in the range of $42 billion to $44 billion, while the Street is modeling for $46 billion. The company also repurchased $5 billion of stock. Let's dig in to all of the above.

Let's talk iPhone
There's been a lot of skepticism surrounding the iPhone 5c. On one hand, perhaps consumer demand for a plastic iPhone isn't as robust as investors had hoped. On the other hand, that could shift the product mix favorably toward the higher margin iPhone 5s. The challenge here is the iPhone 5s faced constraints throughout the quarter and Apple spent most of that time trying to build more.

iPhone average selling prices put up a notable sequential gain from $577 to $637, further confirming the shift toward the 5s. Cook conceded that the 5s received much more attention and grabbed a higher mix of sales than expected. The 5c did get a significant number of new iPhone users to the platform, though. 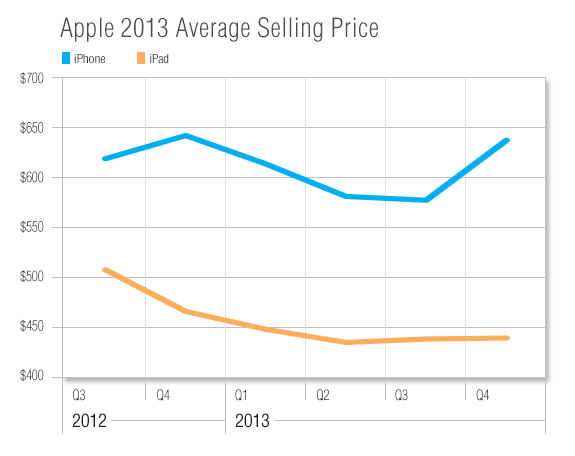 Additionally, Tim Cook acknowledged that the North American business did not perform as well as expected and contracted slightly. In addition to the supply constraints, carriers have tightened their upgrade policies. Last year, both AT&T and Verizon extended upgrade eligibility from 20 months to 24 months. Apple expects these effects to be temporary.

The guidance game
At face value, revenue guidance left a little to be desired. However, there are four factors that are holding it back to the tune of $2 billion. Last year saw some channel inventory increases due to a longer product rollout, iPod sales will continue falling, the dollar is strengthening against other currencies, and those deferrals we talked about last quarter will continue weighing on recognized revenue.

Still, with the China Mobile launch occurring this quarter, some investors (including myself) were expecting more of a tailwind heading into this quarter. It's important to note that China Mobile has only launched its 4G TD-LTE service in 16 cities, which are the only markets that Apple is selling on China Mobile's network. By the end of the year, China Mobile's deployment will reach 340 cities.

China is coming back
Speaking of China, Apple has come back in a big way in the Middle Kingdom. The Greater China business dipped precipitously last summer, but has jumped to a new high. Cook mentioned that including retail, Greater China grew by 31%. 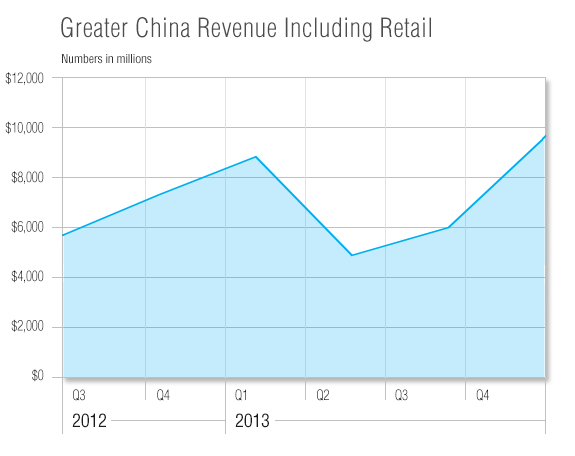 That puts revenue at $9.5 billion.

Icahn can't always get his way
Last fiscal year, Apple repurchased $22.9 billion of stock, of which $12 billion was executed through an accelerated share repurchase program. Including the $5 billion repurchased last quarter, Apple has now bought back $28 billion of stock. That's almost half of the total $60 billion authorization that's good through the end of 2015.

That $5 billion is also just a tenth of the $50 billion that Carl Icahn wants Apple to buy back this fiscal year. Apple retired 9.6 million shares, putting its average price paid around $520. Icahn will just have to occupy himself with buying another $500 million, which should bring his stake to around $4.1 billion.

There's more where that came from
Tim Cook is on record saying that Apple will launch new product categories this year. This ambiguous plan is still on track. According to Cook, Apple has "zero issue[s] coming up with things we want to do that we think can disrupt in a major way."

Cook also teased the possibility of Apple entering the mobile payments market in a big way:

The mobile payments area in general is one that we've been intrigued with and that was one of the thoughts behind Touch ID. But we're not limiting ourselves just to that. So I don't have anything specific to announce today. But you can tell by looking at the demographics of our customers and the amount of commerce that goes through iOS devices versus the competition that it's a big opportunity on the platform.

Among other things, Apple could very well launch larger iPhones and an iWatch this year. Just don't expect Cook to discuss them on an earnings conference call.

Time to buy?
Ultimately, the underlying business remains robust. Apple shipped 153.5 million iPhones during 2013, enough to grab 15.5% of the global smartphone market that approached 1 billion units last year. That's a particularly incredible feat considering that Apple only plays in the high end. The only vendor outselling Apple, Samsung, is increasingly relying on low-end and mid-range devices to drive its unit shipment growth -- and seeing profitability squeezed in the process.

Apple is still the best at what it does.