Dividends can make a huge difference in your return on investments over the long-term. Over the past 20 years dividends added 179% to the return of the S&P 500 (see graph below). Companies like toy manufacturers Hasbro (NASDAQ:HAS) and Mattel (NASDAQ:MAT) and beverage and snack company PepsiCo (NASDAQ:PEP) pay dividends that yield 3.1%, 3.3%, and 2.7% respectively and represent a decent income stream where interest rates for your average savings accounts remain in the lackluster range. 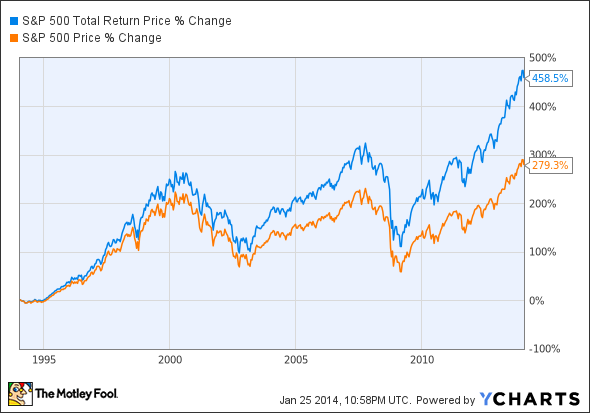 Dividend sustainability
Just because a company gives its shareholders a decent yield does not necessarily mean that it's a buy. The most important factor in evaluating any stock, dividend paying or otherwise, lies in the competitive advantages of the underlying business. One rule of thumb is that if the dividend payout ratio or percentage of company's free cash flow allotted to dividends, lies below 50% then you can consider the dividend solid. If a company's payout ratio approaches 100% then it likely leaves too little for reinvestment of its cash flow back into the business.

Iconic toys
Both Hasbro and Mattel sell iconic, highly recognizable lines of toys giving them considerable differentiation over companies that sell commodities such as steel or coal. Hasbro's Transformers line has served as a basis for three blockbuster films  providing a catalyst to boost its toy sales and popularity.  In addition, revenue growth from its popular Magic: The Gathering game is release driven giving it a little immunity to seasonal swings.  Hasbro also sells popular girls toys such as My Little Pony and Baby Alive. Mattel sells Barbie dolls along with the highly popular American Girl and Monster High toys. Mattel also sells Hot Wheels cars.  Finally, both Hasbro and Mattel sell toys under license from Walt Disney such as Thor action figures and dolls based on the movie Frozen, respectively.

While popularity of beloved toys may make sense from a nostalgic standpoint it pays to look under their hood at the fundamentals to see how they fare financially. Hasbro and Mattel last reported their earnings before the holiday season. It's easy to see that the toy business operates in a highly seasonal business with most of its profitability centering on the Christmas season. In the third quarter of 2013, Hasbro reported a slight decline in year to date revenue  with a negative free cash flow of $31 million due primarily to a royalty payment to Walt Disney . Mattel's year to date revenue grew 5%  with negative free cash flow of $500 million while it awaits payments from customers . The best way to gauge the payout ratios of these companies is to look at the full year's free cash flow. Both Hasbro and Mattel paid out roughly half of 2012's full year free cash flow in dividends.

Diversified: Snacks and beverages
PepsiCo sells beverages such as Pepsi, Mountain Dew, and Tropicana juices and snack foods such as Lay's and Doritos Potato Chips and Quaker Oats products.  The two segments can complement one another as evidenced by test products such as Mountain Dew  and Pepsi  flavored Cheetos. Moreover, PepsiCo's foods like its beverages are utilized in major restaurant chains such as Yum! Brands Taco Bell's Doritos Locos Tacos . During the first three quarters of 2013, PepsiCo grew its reported revenue and free cash flow 2% and 38% respectively driven mainly by its snack volume. So far this year, the company paid out 49% of its free cash flow in dividends .

Looking ahead
Hasbro and Mattel's growth in free cash flow for the full year 2013 will hinge on a good holiday season and timely payments from customers. We will know the answer to that question when Mattel reports on Jan. 31 and Hasbro on Feb. 10. If not then their dividends may be jeopardized or they may need to rely on outside financing such as a stock sale for increased debt to pay this dividend. This never represents a viable option for shareholders over the long-term.

However, the year 2014 looks quite promising for Hasbro as the next Transformers movie, Transformers: Age of Extinction is slated for release in June 2014. This will probably serve as a boost in revenue and cash flow fortifying its dividend. Also, Mattel will most likely continue to enjoy the success of its Monster High and American Girl brands. For PepsiCo, innovative combinations from its diverse product line will serve as a catalyst for revenue, free cash flow, and subsequent dividend growth for years to come. Hasbro, Mattel, and PepsiCo deserve more of your research time and a place on your Motley Fool Watchlist.