Tonight, President Barack Obama will stand in the House of Representatives chamber to deliver the annual State of the Union address. While we won't know for certain what issues he will raise, a number of reporters have gotten presidential aides to share some generalities. Now well into his second term, Obama may acknowledge -- at least obliquely -- the limits of his power in a fractured Washington. He's also likely to focus heavily on inequality in the United States, which has become an important touchstone for his own party as the country continues to slowly and haphazardly recover from a devastating financial crisis.

The Pew Research Center has undertaken a number of surveys on some major issues likely to appear in Obama's speech tonight. Here are some key takeaways:

Are American sentiments in line with our economic reality? More than you might expect. Let's take a look at a few charts that highlight the state of the American economy as President Obama prepares to take the podium tonight.

Economic conditions
When examining the economy, we tend to say that we exited a recession in 2009, because that's when most measures of economic productivity began to turn upward again. But it doesn't feel like much of a recovery because, five years later, the national economy still hasn't gotten back to the level of productivity it could have achieved. We call that the "output gap," and last year the difference between real and potential GDP amounted to almost $1 trillion: 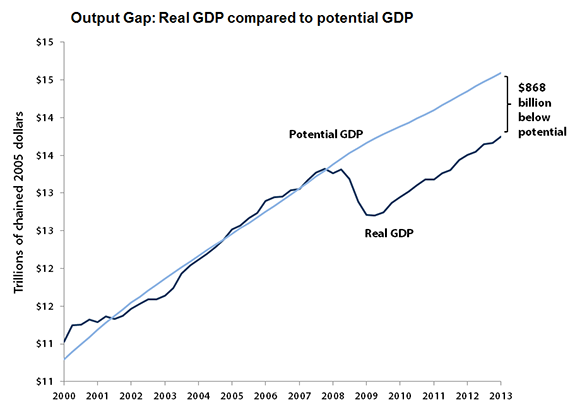 The rise of the rich
Most people also believe that the gap between the wealthy and everyone else has widened. Over a longer timeline, that's certainly true -- but the income-destroying effects of the recession moderated some of the rampant growth in the incomes flowing to America's top earners: 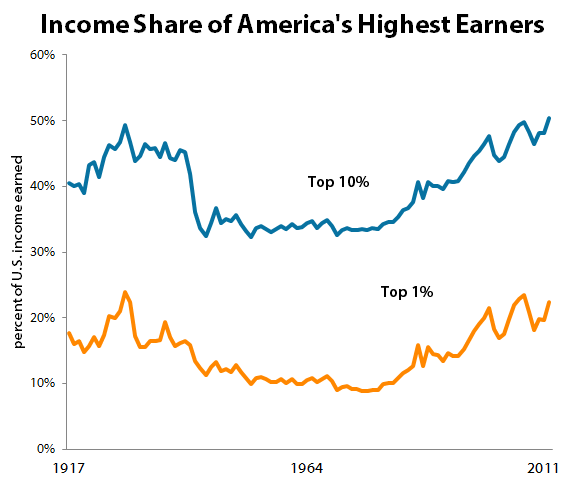 If we measure income share from the year of a president's election onward, we find that he has presided over less aggregate growth in the share of income going to the top 10% of Americans than either Ronald Reagan or Bill Clinton -- the two presidents most closely connected to the economic expansion of the latter 20th century:

However, these statistics may actually understate how unequal wealth distribution actually is: Globally, the wealthiest 10% own 86% of all assets, the wealthiest 1% own $110 trillion in assets, and the world's 85 richest people hold as much in assets as the entire poorest half of the world. It has been widely reported that America's highest earners (the top 1%) enjoyed virtually all of the income growth coming out of the recession. Since the recession ended in 2009, the top 1% have seen 31% real growth in their incomes, while everyone else saw less than half a percent of growth.

Helping the rest
Raising the minimum wage might help, but not by much. The current $7.25 minimum wage equates to an annual salary of about $14,500 at 40-hour workweeks, assuming two weeks of unpaid time off. If the minimum wage were $10.10, that same salary would become $20,200 a year. That actually raises a full-time minimum-wage earner with a family of three just above the poverty threshold for the lower 48 states, which has been set at $19,790 for 2014.

Boosting the minimum wage might help some Americans, but it may not help so many as advocates hope -- about 3.6 million people worked at minimum wage jobs in 2012, which is about 2% of the American labor force. Raising the minimum wage also presents a complex problem for policymakers, employers, and low-income workers: Will the marginal benefit of a higher hourly (and yearly) income be offset by the loss of government-provided social safety nets as incomes rise?

Another way to help people boost their income is to help them receive a college education. However, the problem with encouraging broader college attendance is that it also encourages higher levels of debt -- few people can now go to college without taking on any debt in the process.

In his first State of the Union in 2009 (actually just an address to Congress delivered shortly after his inauguration), Obama said, "We have made college affordable for nearly 7 million more students" and asked "every American to commit to at least one year or more of higher education or career training." A year later, in his first true State of the Union, Obama pushed to end taxpayer subsidies to banks for student loans, which advanced the already accelerating trend toward federal responsibility for student-loan financing. Since then, student loans, which were already growing fast on the government's balance sheet, have exploded: 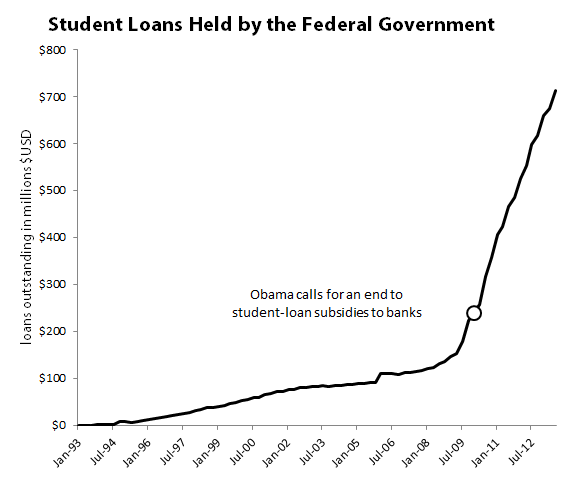 Today, 71% of all college graduates enter the workforce with a debt load that averages $29,400. This number is somewhat skewed by the extreme debt loads taken on by students at private colleges, but the median student loan debt is still $12,800. Unfortunately, employment dynamics have not been kind to recent graduates, who remain unemployed at higher rates and have fewer opportunities to land a good job when they do become employed. Only 39% of all student loan borrowers are currently paying off their loans and are not delinquent in the effort. Millions of Americans who are worried about the costs of college aren't wrong, because these costs have risen far more than any other major expense over the past three-plus decades, including the medical costs Obamacare hopes to rein in: 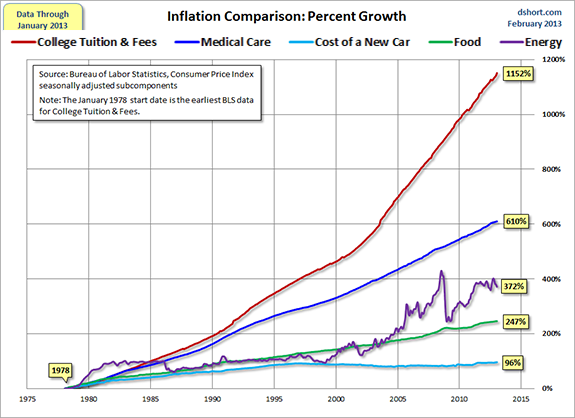 Tough problems need big solutions
These are all difficult issues for any president to face, and Obama has his work cut out for him to convince the American public that he plans to address them. During his tenure so far, no real action has been taken to address income inequality, to boost mediocre GDP growth, to raise up the fortunes of America's lowest earners, or to solve the problem of expanding educational opportunities without burdening students with skyrocketing costs. These are all real issues that demand more than mere lip service, but Washington's many political fractures and its poor record of achievement over the past few years should give few voters hope for real solutions this year.

Will Obama and Congress be able to overcome their differences to enact solutions the American people really want in 2014, or will we be forced to suffer through another year of do-nothing Washington avoiding its elected responsibilities? Let our Foolish readers know what you think might happen during (and after) Obama's address with a respectful comment below.