7 million Americans are at risk of running out propane.

One of the biggest frustrations each summer is running out of propane right in the middle of grilling a steak dinner. However, that frustration pales in comparison to the real risk that nearly 7 million Americans across 33 states are facing today. These Americans rely on that gas to heat their homes. Now, after a brutally cold winter has sapped U.S.propane supplies, these Americans are facing a real emergency situation, especially as another cold snap rolls through. Yet this is an emergency that no American should face. Here's why they are.

The King of Propane runs on empty
America is actually awash in propane. The shale oil and gas boom also fueled a boom in propane supplies as the natural gas liquid is often associated with oil and natural gas. In fact, because propane and other natural gas liquids are more valuable than dry natural gas, drillers are focusing on increasing the production of natural gas that is known to contain a greater portion of these richer liquids.

Propane is valuable because it has a range of uses. It can be used to manufacture petrochemicals, for heating and crop drying, for motor fuels, and of course to fuel the family barbecue grill. Despite these uses we still produce more than we typically use each year. That would have had the same impact as our overabundance of natural gas, which is to push prices down. However, because propane is easy to export, we've simply been sending our excess material abroad.

As the following slide from top propane exporter Enterprise Products Partners (EPD -0.04%) shows, there is a large financial incentive to export propane. 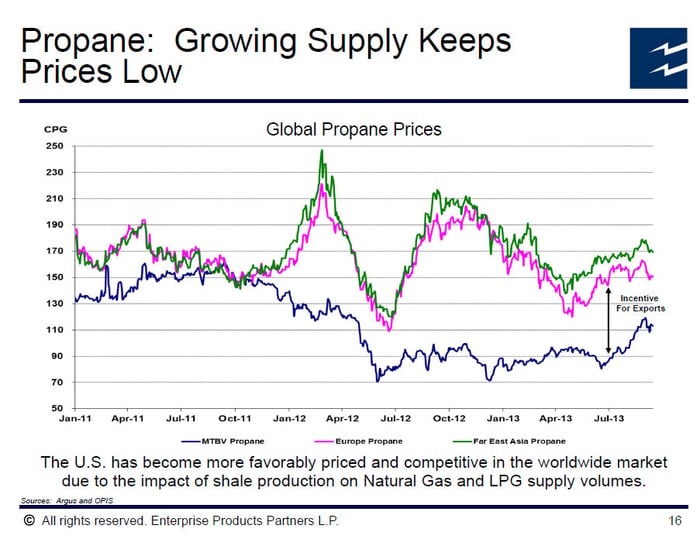 In fact, if it wasn't for that incentive to export, America would be vastly oversupplied with propane. That could have had a major impact on drilling rig counts in liquids rich shale plays across the country. 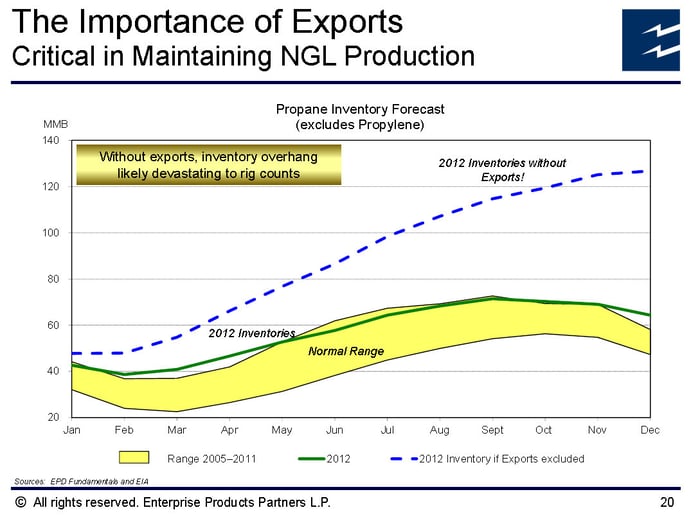 More exports on the way
Thanks to capacity expansion additions at Enterprise Products Partners and others, the United States became the world's top propane exporter last year after by topping Qatar. We're not likely to give back that title anytime soon.

We've seen a rash of announcements from companies looking to join Enterprise Products Partners to export propane all over the world. For example, in late 2012 natural gas producer Range Resources (RRC 2.40%) became an anchor shipper on Sunoco Logistics Partners' (NYSE: SXL) Project Mariner East. As part of that project Range will see some of its propane shipped to Europe.

Another more recent example is a joint venture between Williams (WMB 1.29%) and Boardwalk Pipeline Partners (BWP) The partners are working on a project that would ship natural gas liquids including propane from the Marcellus and Utica plays in the Northeast to the Gulf Coast. Some of the natural gas liquids would be used to supply the growing petrochemical industry in the Gulf. However, the partners are also looking to build a liquid petroleum gas export terminal to send propane to other nations. We can expect a steady supply of such project announcements as America keeps drilling for natural gas liquids and the incentive to export remains intact.

Energy independence or global powerhouse?
America's energy boom is flooding our markets with oil and gas. That's pushing prices down to the point where it's having a negative effect on producer profits. It is also giving our nation a choice. Do we want cheap energy or would we rather enjoy a few years in the limelight as an export powerhouse?

If we choose to go down the latter road and become an export power, we really need to have a better plan in place to ensure that Americans don't run short on energy. We cannot lead the world in propane exports one year and in the next declare an emergency situation in which 7 million Americans are at risk of running out. This really is a case where we cannot have our cake and eat it, too. If we want to stop OPEC's stranglehold on our economy, we can't strangle ourselves in the process.