Are the Sam’s Club layoffs good news or bad news for investors? Wal-Mart faces headwinds, but can this massive big-box retailer fight off those headwinds?

Sam's Club represents 12% of Wal-Mart's (WMT 0.77%) net sales. Therefore, its results are more important than some people realize. This would lead many people to believe that Sam's Club's decision to lay off 2,300 workers is a sign of weakness. However, it's really just a rebalancing of employees so the company can invest in higher-potential stores. Recent results for Sam's Club might not be extraordinary, but they're not reason for panic, either.

Sam's Club performance
In the third quarter, Sam's Club's sales increased 1.19% year-over-year to $14.1 billion. Comps traffic improved 2.4%. On the other hand, the dollar amount spent at comparable stores declined 1.3%. This ties into Wal-Mart's two announcements last year which noted that its customers have been spending less. There are two primary reasons why Wal-Mart's customers had (and possibly have) been spending less.

Target customer and dollar stores
Wal-Mart's target customer often has a lower income than customers who shop at Target (TGT 0.89%) and Costco Wholesale (COST 1.00%). Target and Costco stores are often located in middle- to higher-income areas. Wal-Mart stores can be found anywhere, but these stores tend to compete more with dollar stores: Family Dollar, Dollar General, and Dollar Tree.

Low-income consumers have to contend with a payroll tax increase and underemployment, as well as high gas and food prices. Therefore, these consumers must often choose between Wal-Mart and a dollar store for their shopping needs. Some of them have opted for the dollar stores, which has negatively affected Wal-Mart's sales. However, Wal-Mart is fighting back with its Walmart Express stores. There are fewer than two dozen Walmart Express stores at the moment, but Wal-Mart has reported that it is very pleased with their results to date. That being the case, you should expect future growth in this area.

As far as Target is concerned, Fitch expects Target Canada's operating losses to exceed $1 billion for the year. Fitch also expects that Target will have to contend with several costs related to its recent data breach, including fraud reimbursement, card reimbursement, and litigation. Target recently announced that fourth-quarter comps are now expected to decline 2.5% versus a prior expectation of flat comps. The good news for Target is that its cash flow is strong enough that the company should eventually be able to overcome these headwinds. Recent layoffs appear to have been necessary.

Despite not having nearly as many headwinds to battle, Sam's Club laid off 2% of its workforce. If Sam's Club wasn't a Wal-Mart company, most people would see that this is a result of the current economic environment and an event that went along with industry trends. Because Sam's Club is a Wal-Mart company, many people rant and rave about the immorality of Wal-Mart. While Wal-Mart might not stand on the highest of moral ground, the people who will be laid off at Sam's Club will be paid for 60 days, which allows them time to find new jobs, and they can reapply for different Wal-Mart positions. Additionally, these former employees will have an opportunity to receive severance after 60 days.

The plan for Sam's Club is to improve efficiency, just like any other company. The company will reduce its leadership roles in the fresh food division from six to three, and it will reduce the number of managers and hourly workers.

In January 2010, Sam's Club laid off 10,000 people, partially due to competition from Costco and the need to free up capital to reinvest in its business. Take a look at the chart below with a focus on January 2010. Notice how revenue, net income, and total shareholder return (stock appreciation plus dividends) performed since that time: 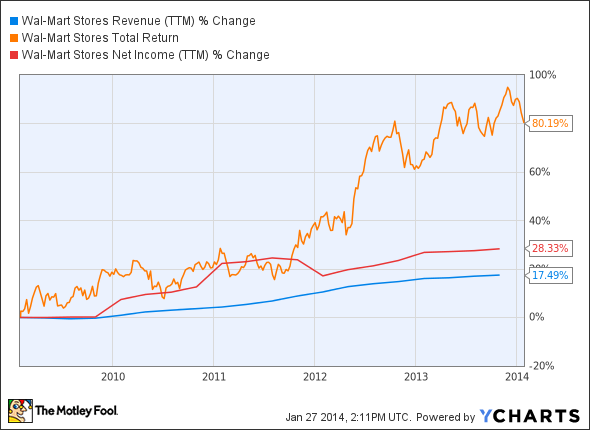 Needless to say, 2,300 layoffs at Sam's Club shouldn't have any negative impact on Wal-Mart. However, Costco has been much more impressive in each category over the same time frame: 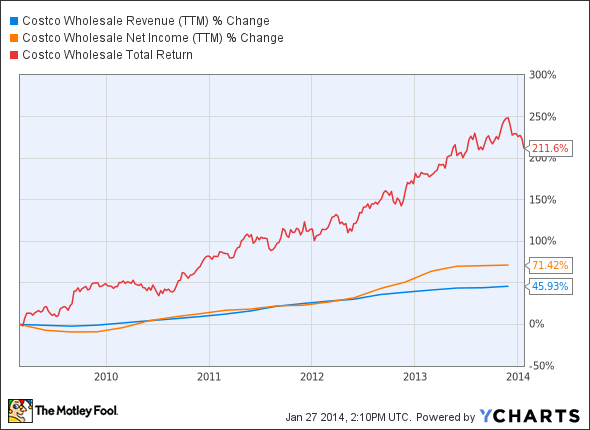 The bottom line
Sam's Club's decision to lay off 2,300 employees is unfortunate and saddening. However, if you're a Wal-Mart investor, it's not a reason to worry. Wal-Mart should continue to offer slow and steady gains via stock appreciation and dividend payments. As far as Target is concerned, it should eventually bounce back from all its current woes, but it's likely well too early to consider an investment. If you're looking to invest in a retailer that offers more growth potential than Wal-Mart and doesn't come with the headwinds that face Target, then you might want to dig deeper on Costco. Please do your own research prior to making any investment decisions.