During 2013, shares of Silver Wheaton (NYSE:WPM) lost more than 40% of their value, due in large part to plunging silver prices. Looking forward, will Silver Wheaton perform any better in 2014? What should investors expect from this company?

Will 2014 be any better?
Last year wasn't a good year for precious metals investors as a whole. The price of silver dropped nearly 36%. Silver ETF iShares Silver Trust  (NYSEMKT:SLV) lost roughly 36% of its market value, with demand for the ETF sharply diminished  in recent months. The amount of silver (in ounces) in this trust declined by more than 6% in the last quarter of 2013.

Returning to Silver Wheaton, the main factors that will affect the company's performance going forward are the price of silver and its production levels. Let's take a closer look. 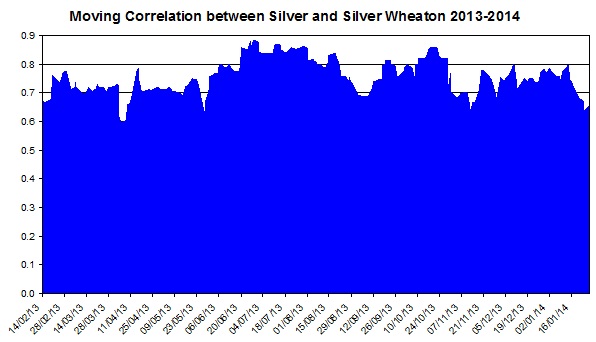 As you can see, the linear correlation is, as expected, positive and very strong. In 2014, the price of silver is likely to be affected by demand in India and China and the FOMC's monetary policy. In any case, weak precious metals prices damaged Silver Wheaton's profitability during 2013. The company's operating profitability declined from 71% in 2012 to 54% in 2013.

Production on the rise
Silver Wheaton's production is likely to keep rising in 2014. The company's decision to acquire the Sudbury and Salobo mines back in the first quarter of 2013 will augment its gold production in the coming years. Salobo's mill throughput capacity is expected to double by the end of 2016, which will increase the mine's production rate. Silver Wheaton's 777 and Sudbury mines' annual production are also expected to be higher in 2014 than in 2013. These three mines have substantially increased the company's gold production.

This leads us to the next point: the company's shift toward gold. Silver Wheaton's acquisition of Sudbury and Salobo has also increased the share of gold in Silver Wheaton's total sales. Back in 2012, gold accounted for only 9% of total silver equivalent ounces produced. In 2013, this rate was 23%. In 2014, this share is likely to further rise. The shift could also adversely affect the company's profit margin, however.

The table below shows the profitability of silver and gold in the first three quarters of 2013.

Final note
Silver Wheaton shares are likely to stay tied to the price of silver. Nonetheless, the sharp drop in shares of Silver Wheaton over the last year may have been too severe considering the company's advantages over peers, including its dividend payment and ongoing growth in sales (in ounces). If silver remains around its current level, and the company continues to augment its level of production, shares of Silver Wheaton could see a slow but meaningful recovery in 2014.