Shares of Apple (NASDAQ:AAPL) are back in the doghouse after the tech giant disappointed investors in its weaker-than-expected earnings report Monday after the bell.

Soft iPhone sales, along with light forward guidance for the current quarter, helped spark one of the biggest single-day declines in recent memory. Apple shares are now hovering around $500, effectively erasing all of its gains since October. 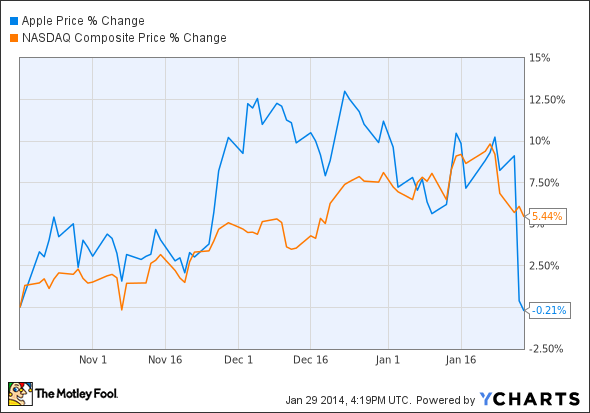 If there was a silver lining, it once again came from CEO Tim Cook's typical reference to future products. In Apple's conference call, Cook briefly commented that mobile payments are one area Apple finds intriguing beyond its current product scope. This naturally gave rise to wild speculation that Apple is indeed eying a possible mobile-payments product as one part of its often-touted "product pipeline."

And while in classic Apple fashion this stops well short of an actual announcement, let's examine why mobile payments make sense as one of Apple's next major innovative products.

Throughout its history, Apple has earned a reputation as one of the most innovative companies in U.S. business history.

However, Apple's preferred brand of innovation doesn't deal with competing within established markets, although it's done plenty of that. No, Apple's hallmark brand of innovation lies in creating or helping shape entirely new industries. And the more you think about it, the mobile-payments market appears to be just that.

For starters, Apple tends to wait for the conditions to be just right before entering a market. This requires capabilities on both the hardware and software front to have advanced enough to create products (or services in this case) that are seamless and easy to use. Take the iPod, for example. MP3 players and digital music had been around for several years before Apple revolutionized the space. However, Apple waited patiently until it could procure enough small, yet powerful, components to fit 1,000 songs in your pocket and had launched its iTunes music service to facilitate easy use of that hardware.

Likewise, Apple could be approaching a similar point with mobile payments today. On the hardware side, the new TouchID sapphire fingerprint scanner on the iPhone 5s could provide a safe, seamless way for users to approve payments on the go. On the software side, Apple doesn't have any explicit payment software released at present.

However, Apple has filed for patents for a possible mobile-payments system. It also has several hundred million credit cards currently on file, several times more than other possible competitors in this space, such as Amazon.com or eBay's PayPal unit.

Apple's next great test
If Apple can indeed revolutionize some emerging product category like mobile payments, it would of course do wonders for Apple in a number of ways.

In becoming a key player in a mobile-payment market expected to reach has high as $800 billion in total payments this year, it would present an entirely new, yet massive, revenue opportunity for Apple. It would also do wonders to re-establish confidence that Apple isn't effectively rudderless from a new product perspective today.

Virtually everyone lamented the passing of Steve Jobs as the possible death knell for Apple's innovative spirit. However, those who have followed Apple closely will also know that much of Steve Jobs' focus later in his career was creating an organization with that same creativity imbued in its DNA.

In his authorized autobiography, Jobs is quoted several times as aspiring to form an organization on par with Hewlett-Packard, a company defined by legendary founders that was able to thrive for decades after their passing.

As evidenced by its recent sell-off, investors are rapidly growing restless with the lack of growth at Apple. However, Cook is on the record saying Apple will launch a new product category of some kind this year.

And while that product might not be the mobile-payment service that's received so much focus over the past few days, it certainly seems like the kind of industry that Apple lives to disrupt.