What: Shares of Boeing (NYSE:BA) are dropping more than 4% in early morning trading after the company reported full-year record revenue, earnings per share, and backlog of orders -- although investors were apparently disappointed with the company's 2014 guidance.

Boeing posted a 7% increase in revenue to $23.8 billion in the fourth quarter, which enabled the company to post a full-year revenue gain of 6% to reach a record high $86.6 billion. The company's core earnings, which exclude some pension expenses, rose 29% to $1.84 billion, or $1.88 per share, for the fourth quarter; which compares favorably to last year's $1.46 per share mark. Boeing's GAAP earnings per share also rose 26% in the fourth quarter to $1.61, which was ahead of the $1.57 per share expected by analysts. For the full year, Boeing's core and GAAP earnings per share rose a healthy 20% and 17%, respectively, to $7.07 and $5.96.

So what: With Boeing beating analyst expectations and posting healthy profit gains in the fourth quarter and for the full year, why is the stock trading roughly 4% lower? First, investors have to keep in mind how high Boeing's stock has been flying recently. 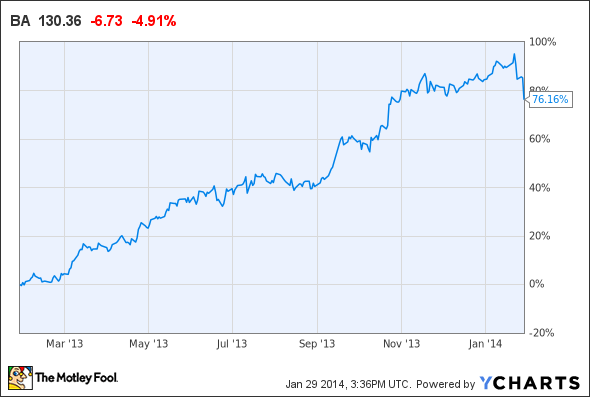 Investors are likely wondering if all of Boeing's good news is priced in currently and, with a lack of new airplane announcements in 2014 to spur new orders and revenue, they are disappointed in management's guidance of a 1%-2% revenue increase for 2014.

In a point that was almost overshadowed by the weak 2014 guidance, Boeing's defense, space, and security business unit increased 6.1% to $8.86 billion in the fourth quarter compared to the previous year. That speaks to Boeing's effort to take costs out of its defense segment and land overseas contracts to help offset the U.S. government's defense budget cuts that could equal $1 trillion by 2021. For the full year, the segment's revenue was only up 2%, but any growth amid U.S. budget cuts will help offset worries that Boeing's defense segment will be a huge drag -- commercial aircraft will clearly be strong enough to send the company's earnings and revenues higher.

Boeing's first 787 to roll out at the increased production pace. Source: Boeing

Now what: Consider that air travel has consistently grown 1.5% faster than GDP, according to Morningstar, and that Boeing is poised with rival Airbus to take full advantage of a commercial aircraft market that is expected to double in size over the next two decades, which would equal more than 35,000 new airplanes valued at $4.8 trillion, according to Boeing.

As Boeing and its investors head into 2014 the quarterly reports will increasingly focus on margins and deliveries. Boeing's massive backlog of orders ballooned to another record of $441 billion at the end of 2013, and the company needs to continue ramping up production to increase revenue. As far as deliveries go, Boeing increased its commercial aircraft deliveries from 601 in 2012 to 648 last year, and expects to deliver between 715 and 725 in 2014.

Investors should also keep in mind that Boeing often gives conservative guidance at the beginning of the year, and if operating margins stay around 10% and the company can ramp up production, 2014 could be better than expected -- although, replicating 2013's increase in share price is far-fetched. Few companies can offer the revenue transparency and safety that Boeing can and, while 2014 might bring slower growth than investors would like, those that stick around can receive a healthy dividend while waiting for the company to execute on its massive backlog and capitalize on the industry's future growth.