Allegiant Travel Company (NASDAQ:ALGT) is known for offering great deals on flights from small cities across the U.S. to popular leisure destinations like Las Vegas and Florida. But on Thursday, the best deal being offered was not for plane tickets, but for Allegiant stock. 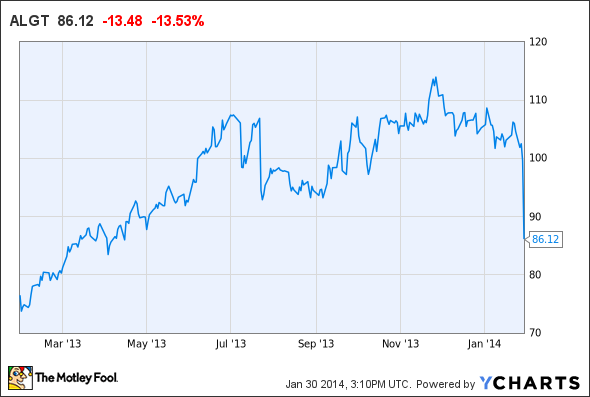 Following a disappointing Q1 outlook provided on Wednesday afternoon, Allegiant Travel shares fell as much as 18% on Thursday morning. But the company's cost and revenue pressures appear to be short-term issues. Meanwhile, rising fares at the country's top airlines will create massive growth opportunities as consumers increasingly turn to ultra-low-cost carriers like Allegiant for low-cost travel.

Costs jump
While Allegiant actually beat the average analyst estimate for Q4 EPS this week, the company shocked investors by predicting Q1 non-fuel unit costs would shoot up by 13%-15%. The revenue outlook also appeared soft, with Allegiant projecting a 2%-4% decline in total RASM (a common measure of unit revenue).

But Allegiant attributed more than half of the cost increases to unusual items. First, the company is starting up two non-airline initiatives. These will add to costs without affecting capacity, driving Allegiant's unit cost up. Allegiant executives were reluctant to divulge details about these programs on the earnings call, but they described one as a promotional project.

The second unusual cost driver was that the partial government shutdown last October delayed the certification of Allegiant's Airbus A320s. This will crimp Q1 capacity growth while raising costs, as Allegiant had to contract with other airlines to fly some routes where it had planned to utilize its A320s.

Looking beyond Q1, the non-airline costs will moderate somewhat, while the A320 start-up costs should disappear entirely. Furthermore, Allegiant is incurring a disproportionate amount of maintenance costs this quarter. As a result, full-year non-fuel CASM is expected to grow a more modest 4%-7%. On top of that, the addition of more fuel-efficient Airbus aircraft should keep total CASM growth at just 1%-4% for the full year, with most of the increase coming in Q1.

Revenue outlook is murky
On the revenue side, Allegiant is expecting a solid 2%-4% gain in total RASM for January. This implies that the projected decline during Q1 is being driven by February and March estimates. The biggest culprit is almost certainly an unfavorable calendar shift as Easter moves from March to April.

Allegiant executives could not quantify the effect of that shift, but March demand was particularly strong last year, while April was weak. The reversal of those trends this year should allow Allegiant to make up a lot of the ground it loses this quarter in Q2.

Foolish bottom line
Despite rising costs and a comparatively weak Q1 revenue environment, Allegiant President Andrew Levy stated he expects Allegiant to generate margin expansion this year. While that seems pretty optimistic today, Allegiant's management team has a long history of outperforming, so I wouldn't discount that prediction. If it comes true, Allegiant could potentially see 20% earnings growth this year.

Longer term, Allegiant's huge cost advantage against virtually every other airline in the U.S. should allow it to continue expanding at a double-digit rate while maintaining a very high profit margin. From that perspective, with Allegiant stock on sale now, it could be a great time to buy!