On Monday, Apple (NASDAQ:AAPL) released earnings that came in slightly ahead of expectations. Both sales and earnings beat expectations from the Street, yet the next day the company's share price slid 7.99%

Instead of focusing on Apple's surpassing sales and earnings estimates last quarter, investors zeroed in one key area: iPhone sales. Apple sold 51 million iPhones last quarter, well below the 55.4 million analysts hoped for. Not only that, but Apple's guidance for next quarter came in light. The implication? iPhone sales could once again disappoint next quarter.

The story across the past year has been that Apple has been unable to keep up with global growth in both tablets and smartphones. Across 2013, researcher IDC estimated that Apple increased its smartphone shipments 12.9%, but the global smartphone industry grew 38.4%. That lagging growth rate is the result of smartphone growth moving to cheaper phones that can sell for less than $100. That's a price point where Apple doesn't have competing products, nor does it have much interest in joining the cutthroat low-end competition.

Let's examine three product categories where Apple has expressed recent interest, and their potential to affect Apple's bottom line. In the past year, Apple booked $174 billion in revenue. So any product would need to see $17 billion in sales to account for 10% of Apple's revenue.

Total Market Size: The television market could be viewed several ways. Looking at televisions themselves, researcher IHS predicted 226.7 million televisions were sold in 2013, down from 255.2 million in 2011. Looking at devices associated with televisions, Gartner pegs the video game console market at $44.2 billion in 2013; $15.9 billion of that total is the hardware in systems.

Is Apple Interested in this Market?: Apple has a definite interest in the broader television space. Discussing the TV, Steve Jobs famously told his biographer Walter Isaacson that he had finally "cracked it." Apple currently produces the Apple TV, which it infrequently gives sales updates on. In the holiday quarter of 2012, the company sold 2 million Apple TVs. Not a bad number for a product described as "a hobby."

Potential for Apple: Including non-smartphones, Apple controls about 10% of all mobile phone sales. If televisions were a similar market where Apple could command roughly 10% market share selling a high-end television at about $1,500, the television market could add $34 billion to the company's top line. If Apple went the route of selling a cheaper non-television device, the company would likely price it somewhere between the low-end cost of Apple TV ($99) and a high-end video game system (up to $499).

Roadblocks: The cable industry is a very profitable space for the companies involved; they're leery of change. Multiple reports note that major cable and media companies have declined to participate in television concepts proposed by Apple. A failure to get cable industry participation could limit Apple's ambition and opportunity in the television space.

Total Market Size: Wearables are just emerging as a field of technology. The Consumer Electronics Association estimated that wearable fitness technology saw sales rise from $43 million in 2009 to $854 million in 2013. That doesn't include watches, a market that Global Industry Analysts pegs at $46 billion by 2017. Currently, just 23% of watches are digital while the remainder are mechanical.

Is Apple Interested in the Market? Apple's patent applications paint of a compelling picture. The company has filed for numerous patents for wrist-based devices, such as the design below for a flexible, AMOLED watch-like device that was filed in August 2011. 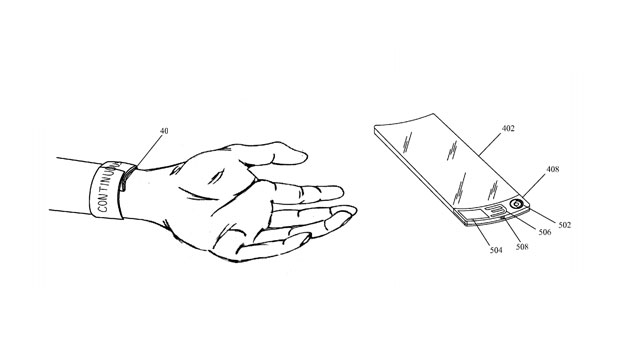 Potential for Apple: Wearables aren't an established field like televisions, so the market size could vary wildly. In addition, the quality of products will determine whether people who don't even wear watches now might be interested in devices. Lastly, Apple has filed patents for Google (NASDAQ:GOOGL) Glass-like devices, so it is currently exploring several types of wearable products that could serve different market sizes.

Roadblocks: Samsung reports its Galaxy Gear smartwatch shipped 800,000 units during the product's first two months on sale. The important word there is "shipped." Sales to actual consumers are much lower. Reviews for the smartwatch were atrocious. Apple won't ship a major product like a watch unless the company believes it's an excellent product. That means significantly better battery life than Samsung's watch, and features that provide valuable features beyond what smartphones already offer.

Total Market Size: Capgemini estimates that there were 333 billion transactions in 2012. The two dominant players in the industry, Visa (NYSE:V) and MasterCard (NYSE:MA), have a combined market cap of more than $230 billion and produced over $12 billion in operating profit over the past year. The market continues growing as well -- non-cash transactions grew 8.5% in 2012.

Is Apple Interested in this Market?: Tim Cook isn't shy about Apple's interest in the market. On the company's last conference call he said, "The mobile payments area in general is one that we've been intrigued with and that was one of the thoughts behind Touch ID. But we're not limiting ourselves just to that."

Potential for Apple: As seen in the quote above, Touch ID is being eyed as a security differentiator. Apple also has the advantage of having over 400 million credit cards on file. Merchants are generally slow to adopt new payment methods -- only 70% of the top 100 Internet retailers accept PayPal. Apple could be one of the few companies that has the size and customer base to compel rapid adoption across merchants.

Roadblocks: Relative to television and wearables, payments will be the toughest market to crack. The first credit card company was Visa. It's still the largest. The first mobile payments company to gain traction? That was PayPal, and it's still the dominant player in the industry. The first movers in payments are normally very dominant. As we've seen from Google's own attempts in the space to gain traction with its Google Wallet program, becoming a player in payments is potentially lucrative, but insanely difficult to break in to.

That's just a glance at some of the potential markets Apple could enter across the next two years. Remember that Apple's introduction of the iPhone created a high-end phone market that's substantially larger than what existed when Apple was considering entering the mobile space, so the size of the market today isn't necessarily the total opportunity.