You can't blame Goldcorp (NYSE:GG) for trying to obtain a premiere project like Canadian Malartic mine on the cheap. It's a world-class mine that could produce as much as 500,000 to 600,000 ounces of gold annually over its 16-year life, and would become one of the miner's leading projects in terms of free cash flow, production, and net asset value.

But the $2.6 billion offer is seen as too opportunistic, and after rejecting the hostile offer, the project's owner Osisko Mining (NASDAQOTH: OSKFF) is turning equally nasty by going to court seeking a restraining order to halt Goldcorp in its tracks. It's alleging Goldcorp misused confidential information and acted in bad faith before launching the hostile bid.

With the price of gold having fallen 30% in 2013 and the valuation of the miners themselves depressed, it's an opportune time to swoop in and scoop up some values. In addition to Goldcorp, which previously indicated it wanted to make acquisitions during this time, Newmont Mining (NYSE:NEM) has also said it would use M&A to add on low-cost operations to its portfolio while Primero Mining (NYSE:PPP) and Asanko Gold both have already begun the process, announcing the acquisitions of Brigus Gold (NYSEMKT: BRD) and PMI Gold, respectively.

But Canadian Malartic would be a unique asset to own. The flagship, senior-scale, high-margin mine produced more gold in the first three quarters of 2013 than dozens of mines owned by the five largest North American gold producers. Between Agnico Eagle Mines, Barrick Gold, Goldcorp, Kinross Gold, and Newmont, which have ownership interests in more than 55 gold-producing assets, only 13 of them produced more gold than Canadian Malartic. 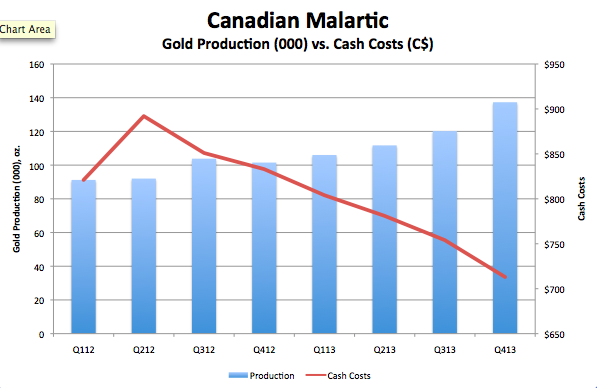 For such a world-class mine, Osisko feels the 15% premium Goldcorp is offering is an insult. The price is a discount to estimates of price-to-net asset value multiples paid for other large-scale gold producers, valuing Canadian Malartic at just 1.0 times those estimates whereas the average multiples of previous large-scale gold producer acquisitions has been 1.8 times estimates. Goldcorp's offer for Andean Resources in 2010 was at the average P/NAV multiple, while its 2006 offer for Glamis Gold was 2.4 times estimates. Placer Dome in 2005 carried a multiple of 2.1 times P/NAV estimates.

Yet even though Osisko's shares have traded above the offer price, suggesting the market agrees the price is too low, it's hard to imagine a competing bid by another miner being made since much of the industry is saddled with heavy debt and is trying to rid itself of costly projects and personnel. Of course, that may inform why Osisko is taking the legal route to thwart its rival.

The latest salvo in this battle for control of the wold-class mine ensures nothing if not that it will end up dragging out in court for some time to come.