Please ensure Javascript is enabled for purposes of website accessibility
Log In Help Join The Motley Fool
Free Article Join Over 1 Million Premium Members And Get More In-Depth Stock Guidance and Research
By Justin Loiseau – Jan 30, 2014 at 10:49AM

Initial jobless claims jumped 5.8% to 348,000 for the week ending Jan. 25, according to a Labor Department report released today. That's an increase of 19,000 claims from the previous week.

After increasing a revised 1.2% the previous week, the latest count came in well above analyst expectations of 327,000 claims. 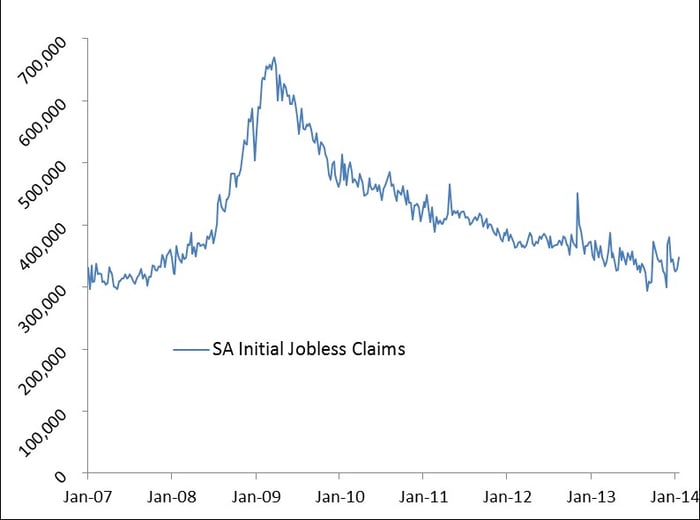 From a more long-term perspective, however, a slight 0.2% bump in the four-week moving average to 330,000 initial claims continues to indicate a slowly improving labor market compared to December's numbers. Both the latest week's claims and the four-week average fall significantly below 400,000, a cutoff point that economists consider a sign of an improving labor market.

For the same period, only California and Oregon registered increases of more than 1,000 initial claims. California pointed to services and agriculture layoffs as a primary push behind its 11,700-claim increase, while Oregon provided no comment for its bump of 1,240 claims.

These 2 Stocks Just Got a Post-Thanksgiving Lift