The Dow Jones Industrial Average (DJINDICES:^DJI) is making back yesterday's drop on the back of tech stocks, rising 137 points, to 15,876, as of 1:30 p.m. EST. Facebook (NASDAQ:FB) is leading tech stocks up after it reported better than expected quarterly earnings. The S&P 500 (SNPINDEX:^GSPC) was up 22 points to 1,796.

Weekly jobless claims rose for the second straight week, as did the four-week moving average. The important thing to note, though, is that generally we are seeing fewer claims than in the past 12 months. The economy is steadily improving and more and more people are finding jobs. 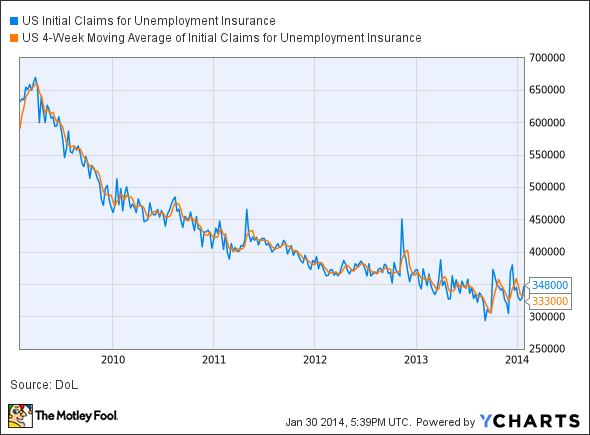 Meanwhile, the latest GDP report showed the economy grew 3.2% in the fourth quarter. That was slightly below analyst expectations of 3.3% growth, but this is a first estimate of fourth-quarter GDP that will be updated twice more in the coming months. Leading the GDP rise was a 3.3% jump in consumer spending and a 6.9% boost in business investment.

The estimate for 2013 full-year GDP growth is 1.9%, below 2012's 2.8% but still positive. On the bright side, GDP growth was slowest in the first two quarters and ramped up in the latter two. If it can keep its momentum and not be hurt by rising interest rates or the problems affecting the rest of the world, the U.S. economy could have its best growth in years.

After eBay and Yahoo!'s disappointing earnings reports, investors had low expectations for Facebook's quarterly earnings. But the social media giant did not disappoint. Facebook stock is up 15% to $61.36 after the company reported that, for the first time, half its revenue was from mobile ads. Facebook reported adjusted earnings per share of $0.31, above analyst expectations of $0.27 per share. Revenue was up 63% year ove year to $2.59 billion, better than analyst expectations of $2.33 billion.