Facebook just had another great quarter, beating the Street revenue consensus by $250 million. However, this may be just the beginning of Facebook's real growth story.

More important, although the company admitted it was losing teens to competitors like Snapchat last year, it seems the effect on traffic was offset by an increase in mobile users, as the company announced that daily active users were 757 million on average for Dec. 2013, an increase of 22% year over year. Unlike competitors Yahoo! (NASDAQ: YHOO), which recently posted a 2% year-on-year decline in net revenues, or Twitter, which needs to improve monetization, Facebook's top line and profitability do nothing but improve. But considering that Facebook already counts 1.23 billion monthly active users on all its sites, how does the social network plan to continue growing? 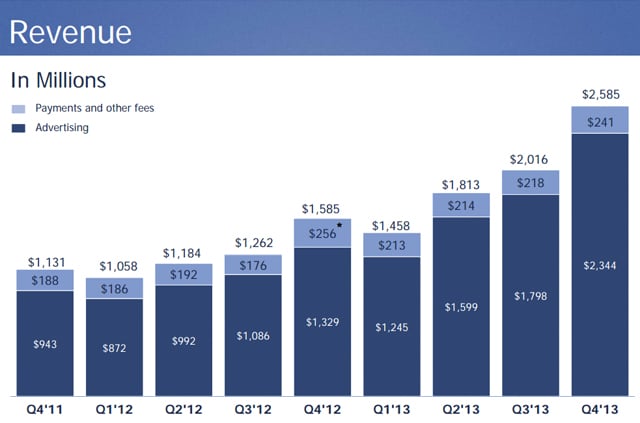 The secret to long-term growth is mobile
Even after accumulating 1.23 billion monthly active users, there are still plenty of growth catalysts for Facebook, both on the revenue and user-metrics sides. Some mid-term catalysts include acquisitions of star products, increasing Internet penetration in developing countries, the promising business of selling tools to developers, and video advertising.

However, perhaps the most important growth source lies in mobile. Simply put, the company's set to benefit enormously from the global increase in mobile penetration rates. That's because Facebook is now basically a mobile company, thanks to its extremely popular Facebook Messenger and Instagram mobile applications.

Instagram's user base has almost doubled over the last year. And Facebook Messenger has experienced an amazing 70% growth rate over the last three months. Mobile ads now account for 53% of revenue, up from 49% in the previous quarter.

New stand-alone mobile apps will increase users and revenue
Aware of the fact that most ads are seen on mobile devices, Facebook wants to continue increasing its mobile exposure.

The company already employs the best minds in the Valley, and it has plenty of cash available to acquire smaller mobile start-ups. Like Yahoo!, which has acquired more than 20 start-ups in the past 12 months, partly for talent-hunting purposes, Facebook is an active buyer in the start-up space. That's why the company tried to buy Snapchat for $3 billion in cash last year. Snapchat is a two-year old mobile app that lets people send photos to friends that vanish 10 seconds or less after they are opened.

More important, Mark Zuckerberg confirmed on Facebook's latest earnings call that the company is interested in developing more stand-alone mobile apps. This confirms an early report from The Verge, which stated that the social network plans to release several new apps this year as a way to continue improving its top line and gaining new users.

Big opportunity in news?
Facebook owns a very popular photo-sharing app and Facebook Messenger, which is the most-used messaging app in the United States. However, the company lacks a mobile news app. After releasing a redesigned news feed for Facebook's main platform last year, Mark Zuckerberg stated that it wants the site to be a "personalized newspaper" that users flipped to every morning. This suggested that the company may be working on an innovative news mobile app to be released this year.

Final Foolish takeaway
After reaching 1.23 billion monthly active users, Facebook isn't adding new users with the same speed it once was, but it still has plenty of room left for growth. By keeping a fast, active product-release cycle, the company can continue increasing its users for several more quarters. As a way to replicate its mobile success with Facebook Messenger and Instagram, the company is expected to release more stand-alone mobile apps this year, to sustain growth.

Adrian Campos has no position in any stocks mentioned. The Motley Fool recommends Facebook, Twitter, and Yahoo!. The Motley Fool owns shares of Facebook. We Fools may not all hold the same opinions, but we all believe that considering a diverse range of insights makes us better investors. The Motley Fool has a disclosure policy.