Fresh off a mixed earnings report that noted significant advances in digital content across several popular franchises, Electronic Arts has continued its upward march over the past year. Does EA have what it takes to outperform industry rivals, or will Activision Blizzard freeze its red-hot ascent?

This past week Electronic Arts (EA -1.11%) released its fiscal Q3 2014 results amid growing optimism for the future of the once beleaguered video game publisher. With a very strong following for hit franchises such as Battlefield, FIFA, and Madden, just to name a few, translating to swift gains in digital sales, the company is proving the relevance of its business in an increasingly digital world. But with shares racing skyward, can Wall Street's 'need for speed' for earnings growth be satiated to keep shares moving higher?

Console refresh or not, EA has staying power
By now we all know that the new console cycle, with the recently releases of the Playstation 4 and Xbox ONE, will temporarily put a crimp in EA's top-line growth. With limited titles out for the new systems as of now and less consumer interest in the older titles geared toward the previous console generation, it's no surprise that companies like EA and Activision Blizzard (NASDAQ: ATVI) may struggle slightly in the short run. Perhaps that's why Wall Street didn't even bat an eyelash at EA's greater than 7% fall in annual GAAP revenue from the prior year.

Instead, long-term investors should focus more on the strength of the company's gaming franchises for clues to the business' ultimate potential. Not only EA was the number one publisher on the new consoles in the western world as further evidenced by their 35% share on both PS4 and Xbox ONE in the third quarter, but its most popular titles also propelled digital revenue, arguably the future of the gaming industry, to new heights. Both of these factors show the power behind this company's brands.

But is now a good time to buy?
EA's popular franchises give it the so-called moat it needs to protect and even expand its future cash flows. Per some estimates on a revenue basis, the Madden NFL franchise alone, which was originally released in 1988 when this author was in grade school, had sold more than 85 million copies through 2010. This obviously doesn't even include the versions from the proceeding years. It's pretty easy to see this franchise is still going strong, and it's not the only one for EA.

However, prospective investors need to consider the stock's current price before they press the buy button. One quick glance at the chart below shows that EA seems a little pricey on both a historical and comparative basis to its leading peer, Activision. 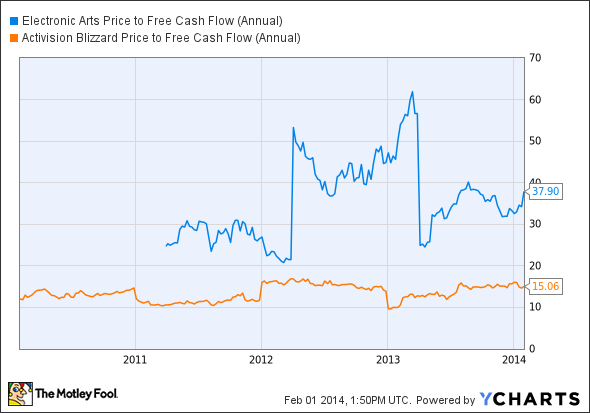 As with many stocks it comes down to a matter of growth potential relative to its current price. Is EA priced fairly right now or should investors wait for a more attractive point to buy shares? Listen to what the Consumer Goods team has to say in the following video and let your own voice be heard in the comments section below.