Staffing firms have unappreciated upside due to changes in our healthcare laws.

When picking stocks it is important to find companies that have strong growth catalysts, but it is equally important to find companies that have under-appreciated growth catalysts. If everyone in the market already knows that something will be positive for a given industry the share prices of companies in the industry will already have risen accordingly. Take Obamacare as an example.  Sure most investors have realized the impact of the law on heath insurance companies, but who has considered its impact on staffing firms, such as Barrett Business Services (BBSI -1.29%), Kelly Services (KELYA 0.84%), Korn-Ferry International (KFY -0.02%) and True Blue (TBI -0.66%)?

So What Changes for Staffing Firms?
Obamacare is one of the most important legal changes of the last decade. However, this law has deep-seated implications beyond how we receive health care. Indeed there is a great deal of evidence that companies have been stingier with their hiring practices due to uncertainty about how the law will affect their bottom lines. In this environment, companies have turned to staffing agencies which can provide more flexible boosts to their staffing levels without requiring them to take on the longer-term burden of employee health care costs.

Bob Funk, the founder of the staffing company Express Employment Services, described the situation as follows in a Wall Street Journal interview: "Obamacare has been an absolute boon for my business. I'm making a lot of money thanks to that law. We're up 8% this year... firms are just very reluctant to hire full-time workers. So they are taking on more temporary help."

Comparing the players
The table below compares some statistics for a variety of small staffing companies. Barrett Business Services is a small-cap, at $581 million, staffing company that specializes in delivering hands-on business service at a reasonable price.  While its forward P/E is a somewhat pricey 29.0, it sports a lower PEG ratio than its peers due to its explosive growth, which has been driven entirely by revenue expansion.  It is always a good sign when a company can grow earnings organically as this may leave more room for expanding margins later if revenue growth slows.

Another reason to be a fan of Barrett is that a recent sell-off has taken the share price from over $100 per share to $81.  The stock has had an incredible run and it has still nearly doubled over the past year, but after such strong gains Barrett's net revenue growth of 27% year-over-year and adjusted earnings per share of $1.14, which came in below Wall Street's estimate of $1.17, were enough to punish the stock.

All of the negativity reflected in the current price most likely means current buyers should see a nice return if the business fundamentals remain solid.  The chart below shows how sound Barrett's business fundamentals have been, with strong growth in revenue shown in orange and a P/E that is slightly expanded from its average over the past two years. Barrett is my favorite pick of the group. 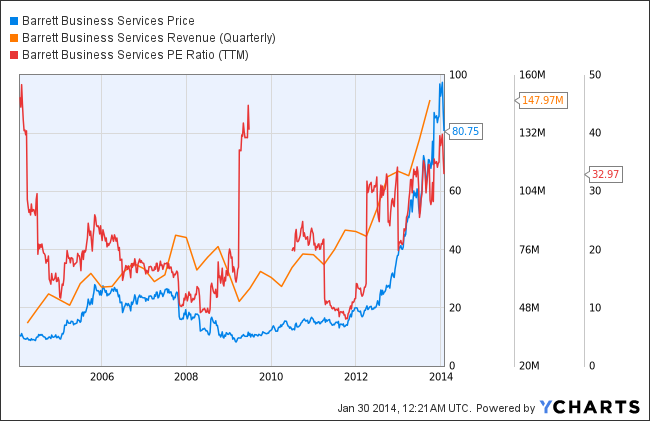 Kelly Services is another staffing company headquartered in Troy, Michigan.  It is one of the larger staffing companies with a market cap of $895 million, but Kelly has had difficulty growing its bottom line in recent years with negative revenue growth year-over-year.  The company employs over 530,000 individuals but it also has the lowest margin (1.2% operating profit margin) and return on equity in the group.  Kelly is in a difficult in-between position because it is neither a high-powered growth stock nor a shareholder-friendly value stock.  With no shareholder repurchase program to speak of and a dividend yield of 0.83% Kelly does not seem like the best allocation of capital at this time.

Korn-Ferry International is an upscale search company headquartered in Los Angeles.  The company focuses on executive searches and it is the largest such company that is publicly traded in the United States with a market cap of $1.2 billion.  The company has offices in 76 countries. Likely due to its focus on higher segments of the market, Korn-Ferry sports a more competitive profit margin than its peers with an 8.9% operating margin.  However, it seems likely that the curtailment of executive recruitment due to health care spending is likely to be less than it is for other segments.  As such, Korn-Ferry seems less likely to benefit from the above investment thesis.

True Blue is a staffing service company which concentrates on temporary blue-collar services. The company provides temporary workers for general labor, light industrial services, mechanics, and technicians. The company has notched impressive EPS growth and prior year revenue growth. True Blue has accelerating earnings growth over the past five quarters and it is my second favorite pick out of the group.

Conclusion
With uncertainty over the new health care law and the economy in general it seems as though businesses will continue to be careful with their long-term hiring.  As a result, companies like Barrett should continue to perform strongly in the near term as their services command a premium in the current economic climate.

Brendan has a position in Barrett Business Services. We Fools may not all hold the same opinions, but we all believe that considering a diverse range of insights makes us better investors. The Motley Fool has a disclosure policy.