Google reported some impressive quarterly numbers this week, but how will it continue to grow the top line over the long haul?

While the big question for Apple investors right now is whether the company can continue to grow, Google (GOOGL -0.55%) investors face quite a different outlook. For them, growth looks certain. Sure, Google isn't the exploding growth company that Facebook (META 2.53%) is, but at least investors can rest assured that the search giant's growth story is sustainable. Here's why.

Is Facebook's success a threat or an opportunity for Google?
That's a great question. With Facebook growing ad revenue at 76% year over year in its fourth quarter, should Google investors be worried about Facebook eating into Google's growth prospects? No.

Here's another way to look at Facebook's success. What if the company's enormous triumph in mobile actually highlights Google's opportunity?

How can this conclusion be made? Facebook's mobile advertising revenue was up more than 400% year over year in Q4 as the company benefits from new and high-quality mobile ad products. Google's mobile ads, on the other hand, arguably lag the quality of other platforms like Facebook and Twitter, analysts point out. So, as Google improves the quality of its mobile ads, advertisers will be willing to pay more for its ad products.

Google's lagging mobile ads are evident in the company's suffering cost-per-click metric, which measures the average price clients are paying per click for ads served on Google sites and the sites of its network members. 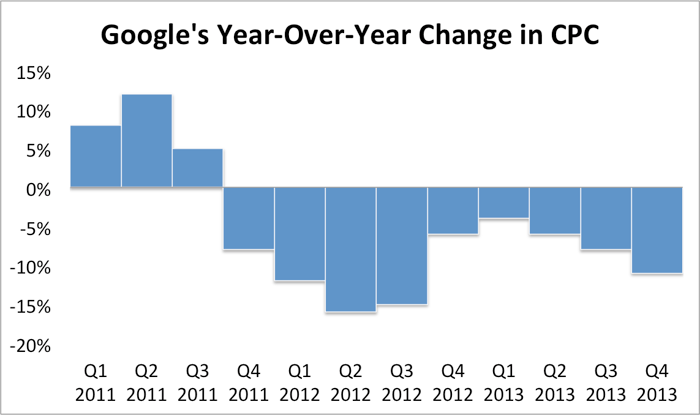 As Google beefs up its mobile ad products to imitate peers, it has the opportunity to improve this CPC metric.

Google's next phase of growth
If Google's CPC metric is suffering, where is its growth coming from? After all, its stand-alone revenue in Q4 grew 22% year over year. The growth is coming from paid clicks, or the number of paid clicks on Google's ads. Its paid clicks are obviously important to the company's business results considering that the majority of its operating income comes from advertising.

Paid clicks were up 31%. Even more, the quarter's growth in paid click accelerated, trumping Q3's 26% growth.

With growth in paid clicks so robust, investors shouldn't worry about the driver decelerating to slow-growth single-digit levels anytime soon. But if the secular growth in digital advertising starts to decelerate in the coming years, Google will need to find new ways to grow its advertising revenue.

That next phase of growth can come from an improving CPC metric as the company improves its mobile ads. Suntrust Robinson Humphrey analyst Robert Peck outlined the opportunity in an interview with Bloomberg:

[...] the pricing part of it [cost-per-click] will ultimately catch up over time. [R]right now it's being suppressed by the mixed shift to mobile, but over time those mobile ads will improve as far as their pricing, and that will give you another lever for revenue growth.

Value matters
Unfortunately, sustainable growth is already priced into Google stock. The company trades at nearly 33 times earnings. Compare that to Apple's valuation at just 12 times earnings. So, even though it's clear that Google's growth likely won't be slowing anytime soon, it doesn't mean it's time to buy the stock.

On the other hand, Google's robust opportunity in mobile is another reason to continue holding. Investors shouldn't cash out of this excellent-performing business simply because the stock is looking a little pricey.