Please ensure Javascript is enabled for purposes of website accessibility
Log In Help Join The Motley Fool
Free Article Join Over 1 Million Premium Members And Get More In-Depth Stock Guidance and Research
By Daniel Miller - Feb 1, 2014 at 9:00AM

Lincoln was a top luxury seller in the U.S., but it's been a long ride downhill since then. Can the Navigator sell like it once did and revive the all but dead luxury brand?

Luxury vehicles are important because they bring in higher margins for automakers, while not competing with mainstream brands -- two very important factors. For many luxury consumers, it's hard to imagine that just over 15 years ago, Lincoln was the best-selling U.S. luxury brand, driven by the massive success of the Navigator. Since then it's all been downhill for Ford's (F -1.67%) struggling luxury brand.

Ford isn't giving up yet, however, and plans to unleash four new Lincoln vehicles, aimed at fast-growing segments, by 2016. Lincoln's 2015 Navigator boasts a redesigned exterior, an updated interior, and a new powertrain, Will that be enough to revive sales in a "has-been" brand? 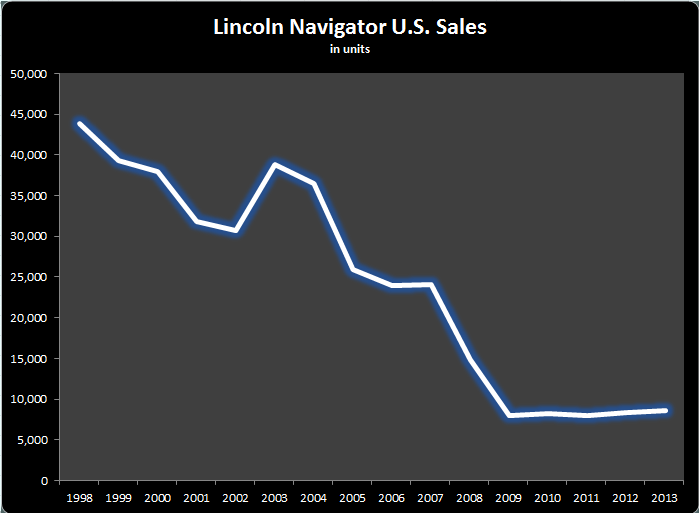 What's new?
Lincoln's 2015 Navigator has about 20 upgrades and keeps most of the same dimensions but shows off the reintroduced split-wing grille that's become the signature of Lincoln vehicles. The Navigator boasts a sleeker front end with a newly designed hood. Lincoln knows what its core customers want, as more than three-quarters of Navigator owners buy another one -- an incredible retention rate for the automotive industry. The exterior also highlights sleek LED lights on its headlamps and tail lamps, with a power lift gate and optional power moonroof.

One of the biggest changes car buyers will immediately notice is the Navigator's new powertrain. No longer is the 5.4-liter V8 engine available, being replaced by Ford's 3.5-liter V6 twin-turbocharged EcoBoost. I'm sure some of you are raising your eyebrows at the change. However, consider that the 3.5-liter EcoBoost will be pushing out 370 horsepower and 430 pound-feet of torque, compared with the previous V8 that generated 310 horsepower and 33 pound-feet of torque.

Increasing engine options and fuel economy with the EcoBoost lineup has been a huge part of Ford's entire turnaround theme: Produce vehicles with better quality, better fuel economy, and higher value. That strategy is now filtering down to the Lincoln luxury lineup, and that should bode well for Lincoln's sales over the next few years. Lincoln's 2015 Navigator's miles per gallon is expected to improve from 13 city and 20 highway to 16 in the city and 22 on the highway -- those are not official numbers, just analyst estimates.

Interior
There's no doubt Lincoln's Navigator has been known for luxury on a large scale, and the interior of the 2015 model doesn't disappoint. Here are a few highlights, according to Lincoln.

The 2015 Navigator is also designed to seat up to eight people and offers car buyers second-row options that can include two captain's chairs, with or without a center console, and a fold-flat bench. One common knock against Ford and Lincoln vehicles has been their infotainment systems, and Lincoln takes another step to help fix complains, adding back traditional knob controls for better and easier operation. Its latest SYNC with MyLincoln Touch will be used with an 8-inch touch screen in the center stack. Technology will continue to be a large selling point to luxury consumers, and if the Navigator is to be a success, its MyLincoln Touch will play a key role.

"We have this iconic vehicle with untapped potential," said Elaine Bannon, chief engineer of the 2015 Navigator. "Now it's got more of what our customers want. It's got the new Lincoln design DNA on the exterior, a redesigned instrument panel, a leather Reserve Package, 22-inch wheels. Once we were able to include all of those elements, I knew we had a winner."

Navigator to the rescue?
Lincoln thinks it has a winner. However, I'm not fully convinced this is the vehicle that will revive the Lincoln luxury brand. For starters, the luxury SUV segment was the slowest-growing among SUVs in America last year. There's also plenty of competition, and this isn't an all-new Navigator, as there are longer-term plans to introduce a next-generation all-new model. That vehicle will probably have a better chance to boost sales much higher. I do believe Lincoln will be able to turn itself around as a brand over the next few years, but I also believe its success will be driven by different models in faster-growing segments, such as the Lincoln MKC. If Lincoln can indeed complete its turnaround over the next few years and grow its sales at a high clip, it will be a huge win for Ford investors and car buyers alike.