With a yield close to 10%, this is one dividend you’ll want to own in your IRA.

What a difference a year makes. In 2012, the deepwater drilling industry was riding high. It was the best year ever for discoveries. Last year, on the other hand, wasn't as kind to drillers, as the industry didn't net any truly massive discoveries. Because of this, oil and gas exploration companies are pulling back on spending, which is taking down the stock prices of contract drillers such as Seadrill (SDRL). However, this short-term pullback looks like the perfect opportunity to add this massive dividend to an IRA.

Stormy seas ahead
Shares of Seadrill and other contract drillers such as Transocean (RIG -2.77%), Noble (NEBLQ), and Ensco (VAL) have all badly underperformed the market over the past six months, as the following chart shows. 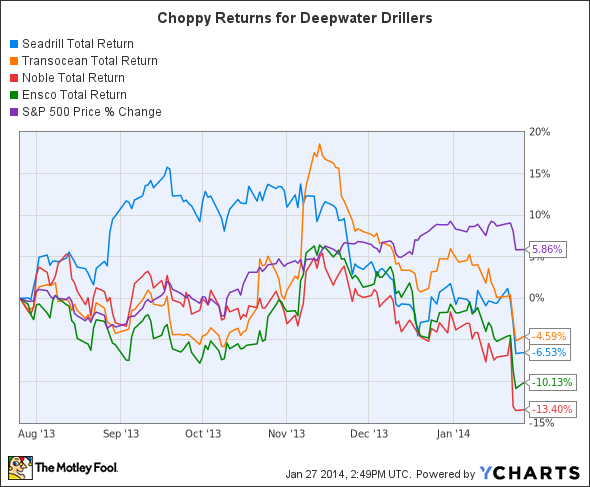 That's due in part to what's being termed a "pause in the cycle," according to Noble. After years of contract growth that was fueled by massive oil and gas discoveries, the industry is seeing oil and gas companies cut back on signing new contracts for deepwater rigs. As a result, there around 38 ultra-deepwater rigs currently without a contract. That's up from just 22 earlier last year. Worse yet, for the short term at least, new rigs are continuing to be built into what is now a very saturated market.

Make no mistake about it: There is the potential for more downside in the near term for drilling rig contractors. That said, investors with a long-term horizon have the opportunity to take advantage of this short-term storm and buy a company like Seadrill at a better price than just a couple of months ago.

Smooth sailing after the storm
At a conference last November, Transocean warned investors of this storm when it said that a third of its deepwater rigs were still looking for work in 2014. However, the company also noted that the long-term outlook for the deepwater industry remains fundamentally strong. It sees the industry drilling 1,250 wells annually by 2025. That's well above the current annual pace of 500 wells each year. That trend suggests that the industry will need a lot of new rigs.

To meet that challenge, the industry is currently building 110 new rigs. However, there are at least 120 rigs currently in service that are expected to be retired in the not-so-distant future because of age. That suggests that the industry could face a rig shortage at some point as it works to build out the 215 rigs that it's projected to need.

Why Seadrill?
I like Seadrill best among the contract drillers, for three reasons. First, it has one of the youngest and therefore most modern fleets of all the major offshore drillers with real strength in the deepwater and ultra-deepwater segments. Second, it has a very robust contract backlog that gives it revenue visibility during the current industry turbulence. For example, when Transocean noted in November that a third of its fleet, or 14 rigs, was still looking for work in 2014, its rival Ensco had eight rigs still available, while Seadrill just had five. That contract strength should enable Seadrill to weather this current storm better than most of its peers.

The final reason I really like Seadrill is, of course, that it pays a massive 10% dividend each year. That dividend is backed up by that strong contract backlog that sits at around $20 billion. That's in addition to the expectation that the company will sign new customers as its top-of-the-line rigs become available. Seadrill should thus be able to grow its already-massive dividend over time.

Risks
Seadrill isn't without risk. The company has piled on debt to grow its fleet. There is a worry that it overestimated future growth, which could lead its heavy debt load to sink the stock. That's one reason the company is currently rated as a hold in our Motley Fool Stock Advisor newsletter service.

Investor takeaway
While the short term could continue to be rough for contract drillers, the long-term industry outlook looks bright, especially in the deepwater and ultra-deepwater segments, which are Seadrill's strengths. Shale drilling might be hot right now, but those wells deplete fast and don't move the needle for major oil companies. At some point, we'll see more money spent on deepwater projects. That's why I think now is the time to add this massive dividend to an IRA and enjoy that income for years to come.