Facebook knocks it out of the park, but how long does the music continue?

Whenever an incredibly richly valued company "beats" estimates on the top, or bottom, line, the shares seem to surge rather dramatically. Why is that? Well, one likely explanation is that often these stocks are viewed as "no-brainer" shorts and tend to accumulate significant high short interest. When such "no-brainer" shorts end up outperforming, then irrespective of valuation, there is usually bound to be some panic buying.

Is that what happened with Facebook?
Take a look at the recent short interest numbers for shares of Facebook (META -2.57%): 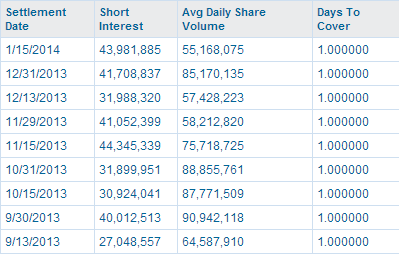 While a short interest of 44 million is negligible compared to the 2.4 billion shares outstanding today, it's important to note the trend in short interest. The number of shares sold short has increased 63% since mid-September. Perhaps not-so-coincidentally, the shares are up about 50% during that time. The better the news from Facebook gets, the more painful it gets for short sellers (which drives short covering and more pain for the remaining shorts -- this is known as a "short squeeze").

It's hard to say whether Facebook shares underwent a short squeeze when they gained nearly 14% in the post-earnings report session, but given the company's already sky-high valuation and its immense size (this is a $150 billion+ market cap name that we're talking about here), it's very curious to see such dramatic percentage moves in the value of the company's stock.

Internet bubble 2.0?
When looking at names such as Twitter (TWTR -0.92%) and Facebook, it's clear that these technologies are in many ways disruptive and that there could very well be some real long-term value to these names. Facebook, in particular, has been extremely aggressive in building a "moat" with its user base and, after taking some pretty serious heat for "failing" to monetize mobile, has really turned things around there.

However, the problem is that much of the "future value" has already been baked into the price at this point, skewing the risk/reward squarely to the downside. At a greater-than-$150 billion market capitalization, Facebook is already worth nearly half of what Microsoft is worth at a fraction of the net income. Same goes for Facebook vis-à-vis Google. In short, Facebook trades as though the future profits are guaranteed.

Foolish take
As long as Facebook keeps beating estimates and driving impressive top-line growth and average-revenue-per-user growth, then the stock theoretically knows no bounds. However, it is also equally important to recognize that when the company does slip and fall (and they always do), the shares will be repriced more in-line with what the growth rate actually turns out to be. The tricky part about making a recommendation is that Facebook really could be the next Google, and its "maturation" point could happen at prices well north of the current price.

So, it really comes down to whether you think Facebook is the next Google or the next MySpace. Twitter is unlikely to have the staying power of Facebook (given how much richer Facebook's ecosystem is), so that one is likely to fall well before Facebook does.