Sales of Dendreon's (DNDN) prostate drug Provenge bounced back in the fourth quarter, but the recovery may not warrant buying shares -- yet.

Dendreon's (NASDAQ: DNDN) Provenge continues to be hotly debated among investors. The drug, which harnesses the immune system as a cancer-fighting weapon, is used to treat patients suffering from metastatic castration resistant prostate cancer, or mCRPC. However, it's not Provenge's unique mechanism that makes it controversial. Instead, controversy stems from a series of stumbles on the way to the drug's approval, sky-high projections for its use, and payer push-back tied to the drug's high price.

Despite generating $143 million in sales over the past two quarters, those sticking points have left Provenge with a reputation for failing to live up to expectations. However, Dendreon hopes a recent pick-up in Provenge's sales last quarter can reverse that perception and provide a launch pad for winning against competitors Johnson & Johnson (JNJ -0.48%), which markets Zytiga, and Medivation (MDVN)and Astellas Pharma, which market Xtandi, respectively.

Facing a challenge
Sales of Provenge struggled last year in part because of competition from Zytiga and off-label use of Xtandi in the pre-chemo indication. 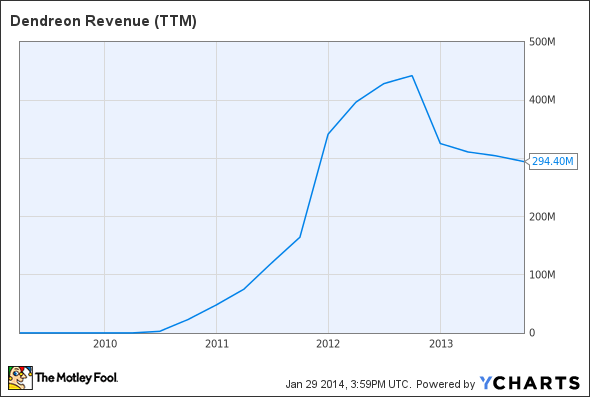 Despite those challengers, Provenge sales did increase in the fourth quarter, climbing 10% from the third quarter to $74.8 million, according to Dendreon's earnings pre-release earlier this month.That's a solid bump, but it turns out that improvement may not be a surprise, given that sales also grew sequentially in the fourth quarter of both 2012 and 2011.

That's not to say a corner isn't turning for Dendreon. However, it may suggest that investors should consider the quarterly improvement in a broader context. For example, the 10% fourth-quarter lift in the drug's sales is about in line with the 9.6% quarter-over-quarter improvement in the fourth quarter of 2012 and trails the 19.75% sequential change notched in the fourth quarter of 2011.

Since there may be some aspect of seasonality helping drive the sequential lift, it may be helpful to consider how the drug's performance matches up year over year. Unfortunately, that comparison is a bit disheartening, considering that fourth-quarter sales of nearly $75 million last quarter were 12% lower than the $86 million generated in the fourth quarter of 2012. Quarterly sales also trailed the $77 million produced in fourth quarter of 2011. More work to do
It's certainly possible that doctors who tried Zytiga and Xtandi last year based on their newness will switch back to Provenge this year. It's also possible that Provenge will see sales benefit from launches overseas. The company won the necessary marketing authorization from EU regulators in September and is probably knee-deep in negotiating with each country's price watchdogs.

It's probably a good bet that Dendreon will face some challenges during those negotiations, since the treatment sells for $93,000 in the United States. It's not uncommon for regulators in the U.K., for example, to balk at such high-priced treatments.

Assuming those price worries can be resolved through discounting, Dendreon has inked a two-year deal with PharmaCell to manufacture the drug in Europe.

However, how much Provenge the company can sell overseas remains uncertain. The company's filing for EU approval sat unaddressed since 2012, while competitors J&J and Medivation got the go-ahead. That's given those two therapies first-to-market footholds that may be hard for Provenge to dislodge.

Fool-worthy final thoughts
Dendreon may be on a path to profitability thanks to a dramatic cost-cutting plan launched last summer; this includes cutting 150 jobs and reducin annual costs by $125 million. Benefits from those moves should begin to be felt this year.

That said, there are questions that need to get answered in 2014. Will fourth-quarter momentum continue in Q1? Will countries like the U.K. pay for Provenge? And will eventual EU market share move the profit needle? Until we have those answers, investors may want to take a wait-and-see approach to Dendreon.