While many investors gasp at Tesla's wild valuation, it's time to look forward at the company's future potential.

Valuing Tesla (TSLA -0.12%) often stops investors dead in their tracks as soon as they run a few popular valuation ratios like price-to-earnings and price-to-sales. But a quick glance at Tesla's growth trajectory and its audacious goals may convince investors to take a closer look at where the company is headed and possibly even reconsider the merit of its seemingly pricey valuation. For a company like Tesla, investors have to look forward, not backward.

The 1,000-foot view
For investors who follow Tesla closely, they understand that Tesla vice president of China operations Veronica Wu's prediction that Tesla will double global sales in 2014 isn't a far-fetched goal. A rapid international expansion of both deliveries and its Superhcarger network basically hedge robust demand for the supply limited company. And given Wu's forecast, Tesla obviously believes it will make big improvements in supply bottlenecks that are currently limiting production.

If Wu's forecast plays out, the scenario would look something like this: 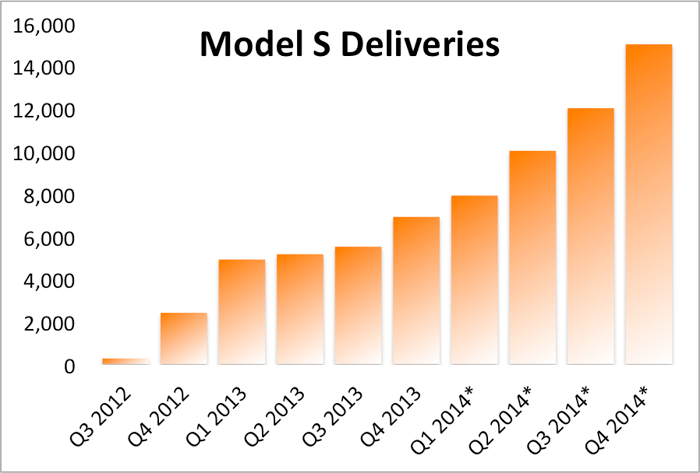 * indicates quarterly estimate based on a scenario that doubles global sales in 2014. Source: Tesla press releases

The 10,000-foot view
Zooming out even further, Tesla's sales trajectory based on comments from management could look even more startling. 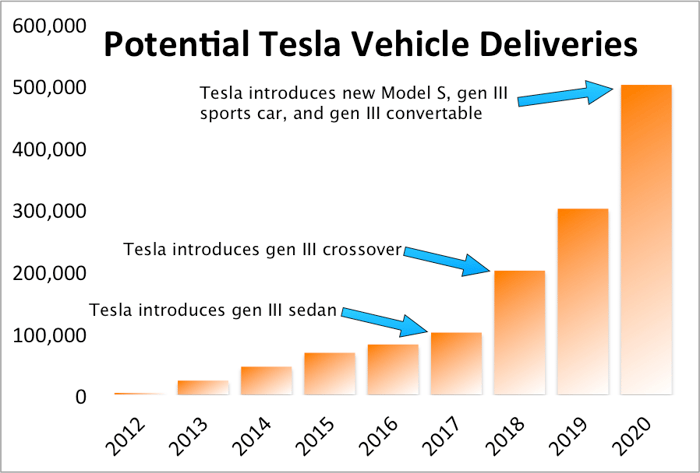 Source: Tesla press releases and comments from management, particularly those of Tesla CEO Elon Musk in a recent interview with Automotive News.

While the chart above is derived on the basis of comments and aspirations expressed by Tesla's management team and not from any formal guidance, the illustrated potential for such monstrous growth gives better perspective to Tesla's pricey valuation today.

Importantly, investors shouldn't consider this 10,000-foot view as the probable scenario for Telsa in the future. Instead, investors should always heavily discount audacious aspirations to more realistic levels since many things can go wrong in growth stories like Tesla's.

But the potential of such growth highlights the key factor many investors overlook regarding Tesla stock. The company is not purely a manufacturer of luxury vehicles. While this may be the case today, the company has promised a more affordable car by 2016 or 2017. And with demonstrated demand for the company's Model S at a price point that begins at about $70,000, it's definitely possible global demand for a lower-cost Tesla vehicle could reach hundreds of thousands of units per year.

But big outcomes for the electric-car maker are definitely possible. Investors shouldn't let popular valuation metrics stop them from taking a closer look at disruptive stocks like Tesla.