Please ensure Javascript is enabled for purposes of website accessibility
Log In Help Join The Motley Fool
Free Article Join Over 1 Million Premium Members And Get More In-Depth Stock Guidance and Research
By Matt Koppenheffer - Feb 2, 2014 at 8:09AM

Berkshire Hathaway's top individual stock position is in Wells Fargo, that much is well known. But how it got to that spot is less well understood.

The StressTest column appears every Sunday on Fool.com. Check back weekly, and follow @TMFStressTest.

Like I said, it seems obvious. It fits well with the view on how Buffett invests. It's also wrong.

Here's how it really happened
The U.S. officially entered recession in December 2007. And though some banks such as Bank of America (BAC 3.39%) saw their stock prices begin to weaken before that point, Wells Fargo's stock held up well until the very end of 2007. 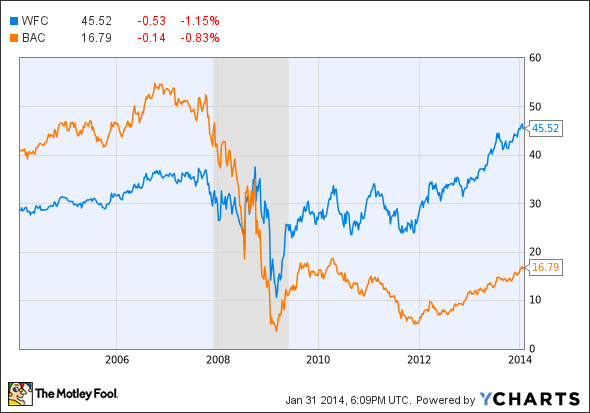 That means that if there was truth to the idea that Buffett loaded up on Wells Fargo during the crisis, we'd logically see a lot of buying between the beginning of 2008 and the middle of 2009.

Did that happen? In short, no. By June 2009, Berkshire's ownership of Wells Fargo stock grew by a mere 5%. When you consider that the total number of Wells Fargo shares owned by Berkshire has more than quadrupled since June 2004, it's obvious that buying during the depths of the financial crisis had little to do with the growth in the stake.

Here's how it actually played out.

If you look closely enough, you can see a section of the chart above that flattens out right around 2008 and 2009, when the buying tailed off.

The first obvious question
It's easy to assume that Buffett missed out on a golden buying opportunity on Wells stock. That easy assumption appears to be wrong as well.

Wells Fargo's stock finished 2007 at $27.49, and though it spent the first quarter of 2009 trading below $20, including a short-lived drop to below $9, the stock held up much better than other big-bank stocks during the crisis -- most notably, Bank of America and Citigroup (C 7.56%). 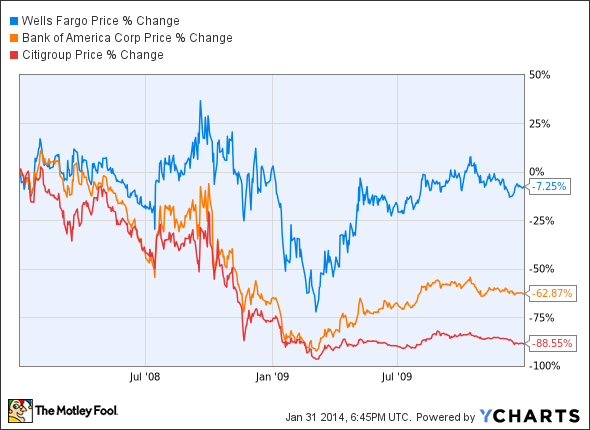 In other words, the huge, opportunistic plummet in many other stocks didn't appear to the same extent for Wells.

And it's not as if Buffett wasn't deploying Berkshire capital during the crisis. Among the major Berkshire moves during 2008 and 2009:

Clearly, it wasn't lack of money or conviction in investing during the crisis that kept Buffett from loading up on Wells Fargo.

The second question is ...
I estimate that Buffett, through Berkshire, spent more than $4 billion buying Wells Fargo stock during 2005 and 2006, chocking the portfolio full of one of the country's largest mortgage lenders right before the housing market was about to fall off of a ledge.

This seems nonsensical to the extreme and a complete counter to the idea that Buffett is an ace when it comes to investing, and investing in financial companies in particular.

But as much as the true Buffett believers -- or, maybe more precisely, those who know more about the idea of Buffett than the reality --  want to believe that he should have perfect insight into the market and the economy, he never claims anything like that. Instead, he focuses on buying the best companies that he can buy. That's likely the bulk of the explanation behind Berkshire's pre-crisis Wells Fargo purchases.

And to the extent that Buffett did have a sense that a banking and financial crisis was approaching, he no doubt realized that the best-run bank in the industry would only benefit as the jokers were shaken out. If that was his thesis, he nailed it, as Wells has picked up significant market share through both the acquisition of the ailing Wachovia and the fact that competitors such as Bank of America and Citigroup had to reel in their business as they licked their crisis-induced wounds.

The outperformance of the stock since mid-2004 also suggests that the pre-crisis buying wasn't a bone-headed move. 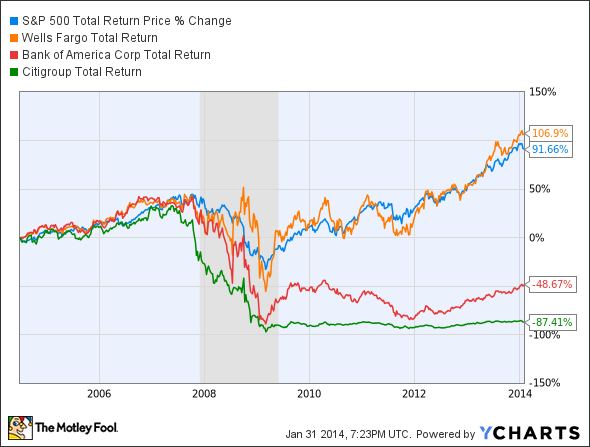 Still buying
Looking back at the preceding chart, it's clear that it wasn't just the historical ownership and the pre-crisis buying that led to Berkshire's giant position in Wells Fargo. It's also the fact that Buffett continued buying after the crisis.

I estimate that during the crisis years -- 2008 and 2009 -- Berkshire spent in the neighborhood of $750 million on Wells Fargo stock. From 2010 on, the conglomerate has sunk around $4.5 billion in additional investment into Wells, including nearly $1 billion in 2013.

Again, the timing may seem odd, since the post-crisis experience has been not only a rapidly increasing Wells Fargo stock price, but also a valuation on the stock -- currently 1.9 times tangible book value -- well above fellow big-banking peers.

But this, too, isn't nearly as confounding as it first seems. Though people like to refer to Buffett as a "value investor" -- and surely value does play a significant role in his investing -- Buffett is actually an investor who tries to buy the best companies that he can, provided they're selling at a reasonable price.

Wells Fargo may not be a screaming bargain today, but at less than twice book value, it may be a very reasonable price for the best of the big banks.

Buffett may also have his eyes set on the distant future when it comes to Wells. As I pointed out in a previous column, perception of the banking industry among both consumers and investors is as low as it's been in decades. And the last time views about the industry were this dour, it set up a long runway of bank-stock outperformance.

What we can learn from the real story of Buffett's Wells love affair
As should be clear, Berkshire's massive position in Wells Fargo isn't the story of opportunistic buying during the financial crisis. Considering the real story here, I think there are at least three take-home lessons:

1. In the face of an oncoming crisis, own the best.

2. When the market is crashing, your favorite company may not be your best investment.

3. Don't avoid buying just because a stock is going up.