Digimarc (DMRC), NewLink Genetics (NLNK), and World Wrestling Entertainment (WWE) trounced the market in a tough month, but only one of them looks like it's still worth your time.

One of the best things about being a long-term investor is that the law of gravity doesn't have to apply to good stocks -- what goes up doesn't necessarily have to come back down. But some stocks can still fly too close to the sun, burning investors who bought in at too dear a price. When we're talking about momentum stocks, one investor's long-term winner could be another's warning sign, so it's important to separate the hype from the truth to find out just why a stock is really soaring today and whether or not it can keep rising tomorrow.

Today we'll be taking a look at three of the best-performing stocks on the market over the past month of trading. They might still be great candidates for your portfolio, but we won't know until we dig a little deeper.

Digimarc
Tiny Digimarc has gotten a lot bigger over the past month as investors have swarmed its stock in anticipation of huge news. That news came on Jan. 14, when the company set a Guinness World Record for fastest retail checkout -- its 50-item scan time of just 51.9 seconds stomped all over the previous mark of 75 seconds, and shares exploded: 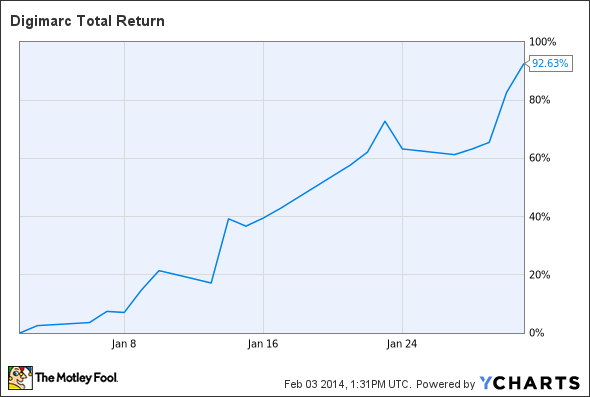 The company's new bar-code system is purportedly an embedded whole-package setup that allows any part of the retail package to be scanned just as easily as any other, eliminating the need for UPC codes that must be identified for scanning. The company estimates that this breakthrough can boost checkout-clerk efficiency by 50% from 24 items per minute to 36, with less actual work. The Digimarc code will also be helpful for shoppers who prefer self-checkout kiosks but get frustrated with the difficulties of efficiently scanning their purchases. Most importantly, the Digimarc code doesn't require any changes to the current retail checkout infrastructure, and its application can be undertaken without modifying package-printing machinery.

Digimarc is already profitable, and it has even paid a dividend since 2012, but it's still tiny. The company could become a huge hit with major retailers, which is clearly why investors have nearly doubled the price its shares over the past month, but there's no guarantee of that. Still, it looks like an exciting opportunity for growth-oriented investors to ride a small but ambitious company into a huge new market.

NewLink Genetics
NewLink has been steadily but strongly moving higher over the past month in what appears to be anticipation of great results from the company's late-stage pancreatic cancer trials. Fool contributor Sean Williams notes that late last year, the University of Cambridge's Cancer Research Institute showed positive results in battling pancreatic cancer, and this could also be a catalyst lifting biotechs with similar treatments on the horizon: 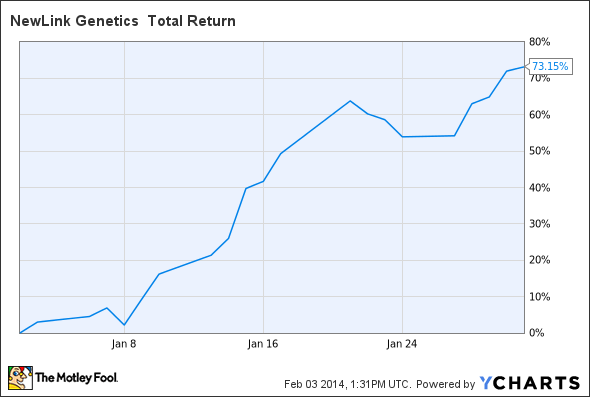 As with all biotechs, buying on the hope of results before they're publicized is always a bit of a gamble, as it can be difficult for most investors to fully grasp the meaning of preliminary trials -- and even then, those trials need not reflect on the final result. But this surge hasn't been on the back of any major NewLink-related news, so investors should take the market's optimism with a grain of salt.

World Wrestling Entertainment
Investors have been more than ready to rumble with WWE shares as of late. The past six months have seen the stock double, and the catalyst appears to be its new WWE Network, an online repository that's often compared to Netflix (NFLX 1.50%), another Wall Street darling of late. The company launched its WWE Network early in January, and shares have been on a tear ever since: 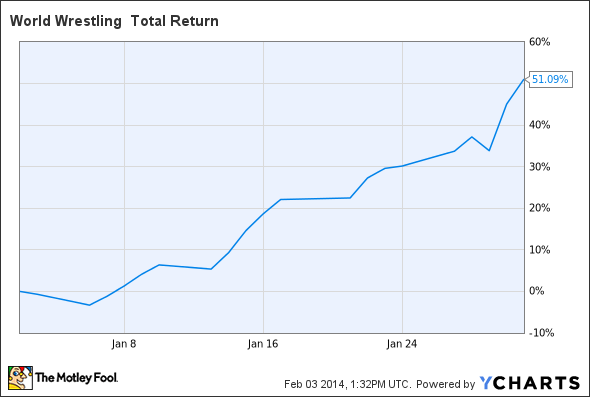 We can trace the start of this surge back to last October, when WWE missed Wall Street's profit expectations in its third-quarter earnings report but posted an impressive revenue beat. During the conference call, executives talked up the WWE Network constantly, and that appears to be the point after which WWE's stock really began to take off. Because execs expect up to 3 million subscribers -- its flagship Monday Night Raw broadcast recently pulled in more than 4.5 million viewers -- it certainly seems feasible that the company's expectations of tripled earnings might be within reach.

At a cost of $9.99 per month, which is actually higher than Netflix's streaming subscription, WWE Network would be a much better option for viewers than its existing pay-per-view-driven system, which will now be included with the network and would cost more than $600 per year if a viewer bought all 12 monthly events. Three million subscribers would generate about $350 million in annual revenue -- equal to almost three quarters of WWE's present revenue. But to justify its new market cap of $1.8 billion, WWE, which had formerly seen its P/E hover in a range of 20 to 25, would have to make $72 million in annual profit, which has never happened before and which fell further out of reach in the past two years as viewer interest has waned: 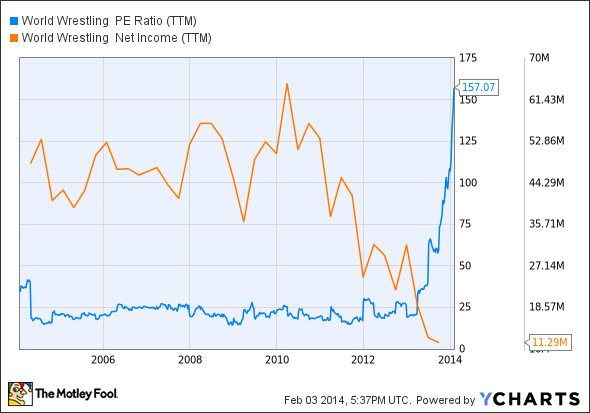 It seems that WWE is, at best, fairly valued for its most optimistic long-term projections and, at worst, grossly overvalued based on too much optimism. There appears to be little reason to be a buyer in WWE stock today. You can smell what this stock is cooking -- and it's not long-term gains.

The Motley Fool recommends Netflix. The Motley Fool owns shares of Netflix. Try any of our Foolish newsletter services free for 30 days. We Fools may not all hold the same opinions, but we all believe that considering a diverse range of insights makes us better investors. The Motley Fool has a disclosure policy.

Why Nordstrom Rallied and World Wrestling Entertainment Got Crushed