Hawaiian Holdings, Inc. stock made big gains in 2013 despite declining earnings, but 2014 should be a better year for the company -- here's why.

Hawaiian Holdings' (HA -0.79%) stock had a great run in 2013 and has nearly doubled in the last 12 months. Interestingly enough, that strong performance came despite the fact that the company posted lower earnings in 2013 than in 2012. 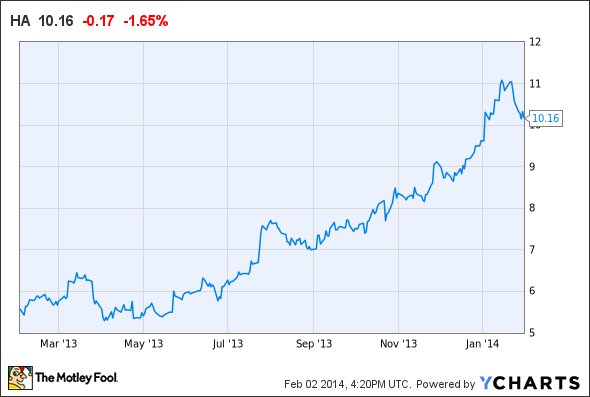 In 2014, Hawaiian Airlines is likely to return to strong earnings growth, as the maturation of its route network and new revenue initiatives help drive unit revenue improvement. If this earnings improvement materializes, it will justify further share price appreciation for Hawaiian Holdings stock.

Overcoming revenue pressures
In the first half of 2013, Hawaiian Airlines experienced significant unit revenue declines, which weighed heavily on the company's earnings. First, the carrier was hit hard by the devaluation of the yen in late 2012 and early 2013, which reduced the dollar value of Hawaiian's ticket sales in Japan. The yen has recently represented 15%-20% of the company's total sales, giving Hawaiian far more exposure to the yen than any other U.S. airline. 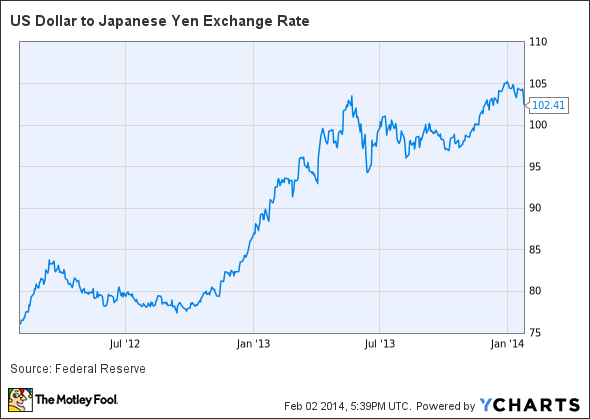 Additionally, Hawaiian had to cope with overcapacity on some routes between the U.S. West Coast and Hawaii in the first half of the year. The net result was that PRASM -- a key measure of airline unit revenue -- declined 9.9% for the first half of 2013.

A slide in the Australian dollar exchange rate that began in mid-2013 has recently added to Hawaiian Holdings' foreign exchange problems. Nevertheless, the company returned to unit revenue growth in the second half of 2013, culminating in a 3.7% PRASM increase last quarter.

Currency fluctuations continue to be a major headwind. For Hawaiian's international business, PRASM was down 17.7% in Q3 and 10.6% in Q4, with currency effects accounting for well more than half of the decline in each case. However, these declines have been offset by double-digit unit revenue growth in the other two parts of Hawaiian's business -- interisland flying and flights to the U.S. mainland.

Turning the corner
With the North American business now on track, Hawaiian Holdings is set for strong earnings growth this year. The company is projecting a 4%-7% PRASM increase for Q1, which indicates that currency headwinds are dying down.

Assuming that the yen and Australian dollar exchange rates remain near recent levels, Hawaiian should be able to regain some of the revenue it lost in 2013 by increasing local currency prices in Japan and Australia. More generally, most of Hawaiian Airlines' international markets are still maturing. As brand recognition improves and Hawaiian Airlines learns more of the nuances to competing in each market, unit revenue gains should follow.

Foolish conclusion
Hawaiian Holdings returned to earnings growth last quarter, and its Q1 outlook suggests that the trend will continue in 2014. After breakneck growth in the last few years, Hawaiian is adding only one new city to its network this year: Beijing.

The slower pace of expansion should allow the company to focus on improving results in many of its new international markets. As Hawaiian starts to offset the impact of currency fluctuations with fare increases and higher load factors, margins should widen dramatically. This will ultimately pay off in the form of even greater share price appreciation for investors.

Adam Levine-Weinberg owns shares of Hawaiian Holdings. The Motley Fool has no position in any of the stocks mentioned. We Fools may not all hold the same opinions, but we all believe that considering a diverse range of insights makes us better investors. The Motley Fool has a disclosure policy.