It's no secret that there seems to be a big rush toward low-power, high-density servers, also known as micro-servers, particularly within the ARM (ARMH) camp. Intel (INTC -1.91%), believe it or not, was first to market with a very competitive solution, known as Avoton. However, even though Intel seems to be jumping into this nascent market with both feet -- in stark contrast to its mobile snafu -- there is a big concern that margins will be worn down.

The bear argument
The idea behind these micro-servers is that instead of using a bunch of hefty processors with beefy cores to do work for which these processors may be overkill, a data-center operator would instead want to buy chips with very high integration, less brute CPU power, and lower-power envelopes, leading to a total cost-of-ownership savings.

The notion, then, is that even if Intel is successful here, it will be selling lower-ASP Atom processors into this market. Many confuse lower ASP with lower margin, which isn't the case. The idea is that if these chips are smaller and lower-power, they're probably cheaper to make, too. So, on a raw margin-dollars-per-unit, they may be "lower-margin." But on a gross margin percentage level -- and given that more of these processors will usually be purchased for the given workload -- it actually turns out to be a wash.

Intel proves the point
While the claim above seems plausible, the key is that Intel actually confirmed this at its analyst day: 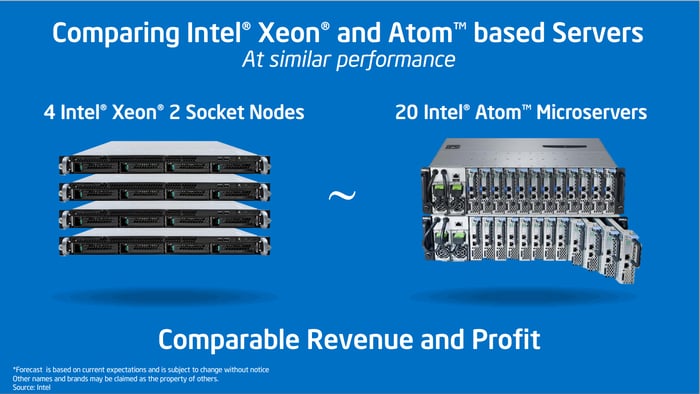 In fact, in the presentation, CFO Stacy Smith actually hinted that the Atoms -- not the higher-end Xeons -- generated higher gross-margin dollars per wafer than the Xeons. This would seem to be contradictory to the bear argument that a mix-shift down to Atoms would be detrimental to profit growth.

No, this probably isn't going to end up like smartphones
Another argument that Intel bears often cite is that this market is destined to become very price competitive. There will be a ton of players coming online here, and this space will, indeed, become more competitive. However, very few will have the scale or wherewithal to actually drive a price war -- and the ones that do aren't going to do so simply for the sake of doing so.

Further, as the unit volumes in this market are likely to be measured in the hundreds of thousands to low millions, rather than the billions that mobile apps processors drive, gross margin percentage will be very important here to recoup the development costs -- 40% gross margin probably won't cut it, and would put many of these smaller players out of business quickly. As with most data-center chips, these will be 60%-plus gross margin devices.

Foolish bottom line
While this market will get competitive, thanks to ARM's continued push, it is going to be very difficult for the smaller ARM-based players to gain traction unless they're targeting a niche/design point that Intel isn't going to be interested in -- or can't service with its current Atom or Xeon cores. Samsung, Qualcomm, and some of the specialty network players will certainly have a good chance here. But even then, Intel is deeply entrenched and has beaten out many larger, more powerful chip players in the server market over the years.

Why Workday Stock Was Climbing Today

Why Chinese Stocks Are Popping on Wednesday
349%