Kimberly-Clark and Hershey both saw gains in January as the biggest market indexes saw declines. It looks to be a good year for classic grandma stocks!

January was a rough month for investors, with larger-than-usual daily ups and downs in the market. Kimberly-Clark (KMB -0.41%) and Hershey (HSY -0.10%) were among several stocks that were able to perform comparably well in these adverse conditions, topping our list of January's hottest "grandma stocks."

Grandma stocks beating the market
Many investors were finally grounded in January after a full year of market gains that spanned most sectors. Regardless of whether the market is experiencing a full pullback or merely a small hiccup along the way to greater gains, so-called "grandma stocks" may provide investors with a small reprieve from what may be an otherwise volatile season.

I use the term "grandma stock" to describe defensive stocks, which are most often companies that produce reliable consumer staples. These companies generally fare well regardless of general economic and market conditions because their goods are always in demand. These stocks are typically less volatile than the market as a whole, as indicated by their lower beta values.

As an overgeneralization, grandma stocks with low beta values won't see as big dips and peaks as a company with a larger beta. As with all companies, some fare better than others, and some occasionally break the mold of tempered gains or losses relative to the overall market.

In January, while the S&P 500 index and the Dow Jones Industrial Average recorded their biggest monthly losses since May 2012, grandma stocks largely saw tempered price drops, which should remind investors that bull markets are not guaranteed and that conservative investing has its time and place. January's top-performing grandma stocks, Kimberly-Clark and Hershey, actually saw their market valuations rise. 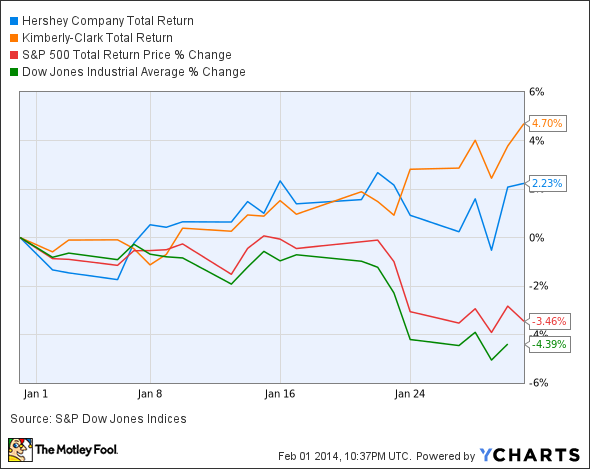 Kimberly-Clark is a classic grandma
Kimberly-Clark has a beta value of only 0.35 and is one of the world's largest manufacturers of household products, making it a quintessential grandma stock. Diapers and toilet paper are not the most exciting products, but they are essentials for everyday living and help Kimberly-Clark withstand major market fluctuations.

Like the best companies for investors, Kimberly-Clark is able to find and utilize different growth opportunities. Its 4.7% total return for the month of January can mostly be attributed to one such channel for growth. Slowing growth in emerging markets has been largely to blame for poor market performance this month, but Kimberly-Clark's gains in emerging markets have helped the company fare well in January. Strong growth in China and correspondingly optimistic earnings forecasts for 2014 have investors believing in Kimberly-Clark.

Hershey, again
Hershey was at the top of my list for the hottest grandma stock of 2013, and it continues to perform well at the start of 2014. The company is a great model for an established business that is able to increase margins by increasing operational efficiency. As I reported at the end of 2013, Hershey will continue to leverage the operational advantages that come with being the largest chocolate manufacturer in North America. As a result of its position in the market, it makes for a solid investment in the coming years.

The takeaway
Increasing margins, international growth, multiple established brands, dividends... there is a lot to like about both Kimberly-Clark and Hershey. Investors realized and responded to this in January as the rest of the market was seeing a decline. During a year when many are projecting a pullback in the market, grandma stocks like these are a great option for investors seeking more stability in their portfolio.

Shamus Funk has no position in any stocks mentioned. The Motley Fool recommends Kimberly-Clark. Try any of our Foolish newsletter services free for 30 days. We Fools may not all hold the same opinions, but we all believe that considering a diverse range of insights makes us better investors. The Motley Fool has a disclosure policy.