Everyone's panicking about a big manufacturing drop, but it's not necessarily the start of a slowdown.

Investors are quite often creatures of habit, ritual, and superstition -- the "Super Bowl Indicator" had us hoping for a Broncos win, so that horrendous blowout should result in a market crash this year, right? Of course, things are never so simple. Or are they?

Time-based superstitions are even more powerful than those that follow sporting events or the height of hemlines, and one of the strongest is the "January Barometer." As the first month goes, so goes the year. If that's the case, we're in for a rough year, as both the Dow Jones Industrial Average (^DJI -0.72%) and the S&P 500 (^GSPC -0.38%) tumbled in the first month of 2014: 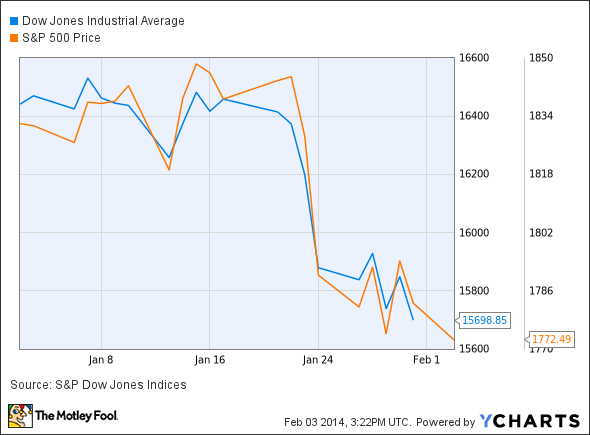 According to Fidelity, the January barometer is relevant because a number of major political and economic events take place in the first month of the year, including presidential inaugurations every four years, the resumption of congressional activity after elections or recesses, and the implementations of new market strategies for a new year. However, it's hardly an exact barometer, as January gains have resulted in full-year losses 16 times since 1934, when the barometer first became relevant as a result of new electoral rules. The last whiff was in just four years ago in 2010, when the Dow fell 3.5% in January, only to rise 11% for the full year.

A more accurate barometer?
However, there are worthwhile reasons to be concerned that this year's disappointing start could portend a poor year. Today, the Institute for Supply Management's Manufacturing Index  suffered a huge drop to 51.3 from last month's level of 56.5, heading rapidly toward the underside of 50 points, which would portend a slowdown. The drop was shocking for economy watchers, as even the lowest expectation was for the index to hit a level of 56. That made January's the biggest whiff on record. The subindex for new orders collapsed at the fastest rate since 1980 -- apparently not even the financial crisis caused such a devastating one-month decline: 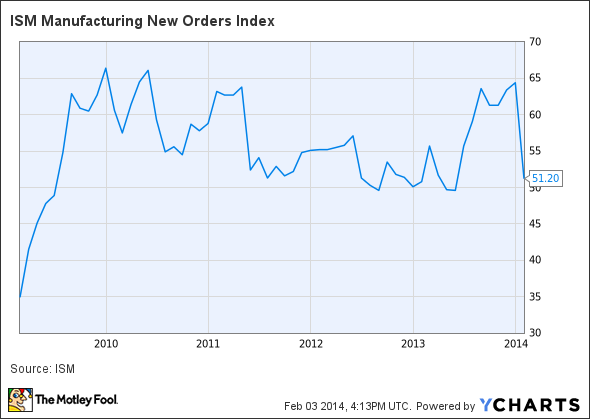 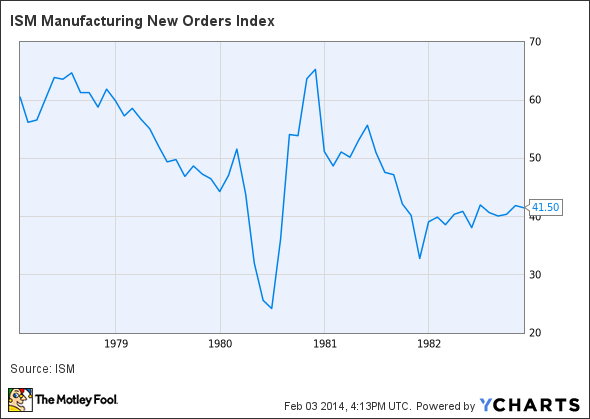 This isn't a particularly good sign for the American economy, but it's not necessarily a sign that things are falling apart. The new orders index also fell hard in 1992 (twice, in fact) toward the contractionary midpoint, only to recover as the U.S. entered the early days of its strongest economic expansion in recent memory: 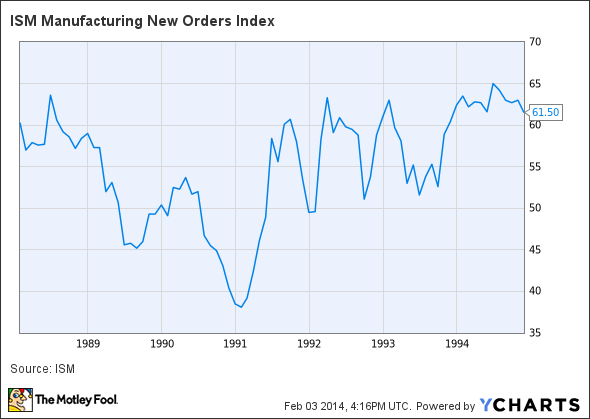 As a result of this drop, the Volatility Index (^VIX 2.06%) broke into 20-point territory for the first time in more than a year. It may close slightly lower, but it's also worth pointing out that at 20 points, it's still in excess of 50% lower than it was five years ago as the economy left the recession behind: 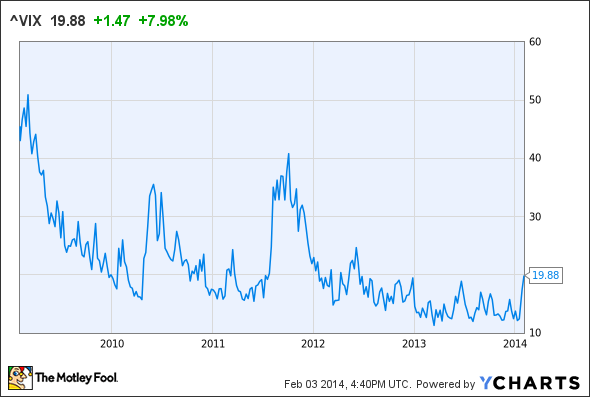 Today's historical tidbit
It's a bit apropos that we head into February with a sense of doom and gloom gripping the markets, because it was exactly 377 years ago today that the first great financial bubble -- and most likely the stupidest -- began to blow apart in spectacular fashion. Dutch tulipmania died on Feb. 3, 1637, and you can read all about it, and about other notable economic and business events that took place on this day in history, when you click here.