According to Movoto Real Estate's State of the Market report, the market followed seasonal trends on a month-over-month basis, as the number of available homes on the market and the median list price per square foot index dipped when compared to November. At the same time, our data shows that year-over-year changes in the median list price per square foot and inventory level indexes are similar to previous years' numbers.

How This Report Is Made

In building Movoto Real Estate's monthly State of the Real Estate Market report, we look at 38 geographically diverse cities in order to determine total inventory levels and median price per square foot index. In addition, we further break down this data on a month-over-month and year-over-year basis. The data used comes from each city's Multiple Listing Service.

During the 12-month period between December 2012 and December 2013, there were 33 cities in which the median list price per square foot increased. Of the cities that had increases, 17 witnessed double-digit gains.

The cities that saw the largest gains by percentage were:

In general, the list price per square foot for homes increased by double digit percentage points during 2013; however, the rate at which homes gained value slowed starting in June. The 12-month period between December 2012 and December 2013 saw one of the smallest gains of the year.

Under normal market conditions, home prices decrease in the colder months, as there are fewer home buyers.

At the opposite end of the spectrum, a number of cities saw a decrease in inventory. The cities which had the greatest decrease in available homes were: 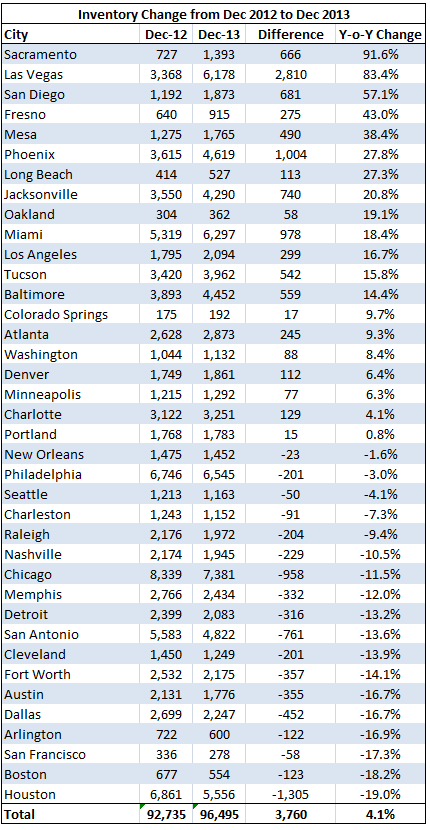