Tech companies are building their future on how well they deliver content.

If content is truly king, then content delivery must be its queen. Some of today's largest tech companies figured this out a long time ago and built ecosystems and network infrastructure that shovel content to their devices and services. Apple (AAPL -0.34%) is no different than Google (GOOGL -0.55%) and Facebook (META 2.53%) in this respect. Though each one provides different content, they all know that how they deliver that content is what's really important. 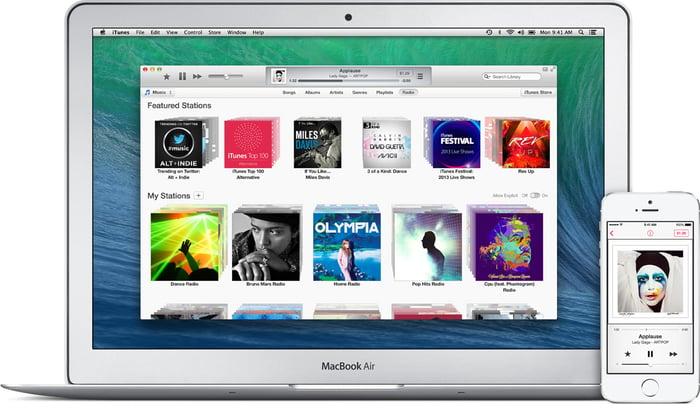 Content control
The long-standing buzzword "ecosystem" is thrown around all the time in techspeak. The term encompasses the devices, content, and the delivery system that companies like Apple have created. For Apple, its ecosystem started first with the iPod and iTunes, then the iPad and iPhone and App Store. Creating great devices wasn't enough, Apple wanted to be the provider of great content as well. That's why it's done things like launch iTunes Radio, start "hobbies" like Apple TV, and create cloud-based versions of its iWork programs. Well-designed and intuitive operating systems simply aren't enough for the company.

The Wall Street Journal reported this week that Apple is expanding its network infrastructure so it can deliver even more content to its millions of customers. WSJ said the company is making deals for more bandwidth that could make downloads and online streams from Apple's content libraries to Apple devices even faster.

Improving iTunes downloads, iCloud storage, and iOS update speeds isn't likely the only goal, though. The long-standing rumor of an Apple-focused television or full-fledged television service is gaining steam once again. To make something like that work would likely require the new network investments Apple is making. But Apple isn't alone in its endeavor. Both Google and Facebook have also increased their Internet content infrastructure in order to efficiently deliver their services to customers. Google's focus on this is well known. The company serves up billions of pages of data to its users everyday. Its Android mobile operating system delivers music, videos, books, etc. to millions of users each day. Google has even started to cut out the middleman and deliver the Internet, literally the pathway to all of its content, directly to customers through Google Fiber.

For a less nuts-and-bolts example, look no further than Facebook. The company's recent release of its iOS Paper app is yet another illustration of a tech company controlling content distribution. Paper still includes Facebook posts, messages, and friend invites, but the focus is on aggregating web content in channels like news headlines, sports, photography, food, and urban life.

Facebook not only sees the importance of allowing users to create and share information with each other, but also in delivering hand-picked content to them from around the web. Paper feels like Facebook 2.0 -- a place where users keep up with their friends but stay connected to the rest of the web simultaneously.

The opportunity
For Apple, the opportunity in building its network infrastructure lies in delivering more content faster to its customers. It doesn't seem sexy now, but what will come out of it could be. Playing on the television rumors, let's imagine an Apple television service that does for your living room what the iPhone and App Store did for mobile. Of course, Apple TV already exists, but let's consider that an experiment for something much larger.

Apple never makes its plans clear to the public, but it's important for investors to see the big picture with Apple's infrastructure move. Like Facebook and Google, Apple is increasingly positioning itself to deliver what we all essentially go to the Internet for -- content. It's not a difficult concept to grasp and it's not a revolutionary one. But many tech companies try to do the same thing and fail miserably. As Apple builds a strong network for bringing us all more content, the opportunity for selling more devices and more services come with it and following behind them could be new revenue streams.

Fool contributor Chris Neiger has no position in any stocks mentioned. The Motley Fool recommends and owns shares of Apple, Facebook, and Google. We Fools may not all hold the same opinions, but we all believe that considering a diverse range of insights makes us better investors. The Motley Fool has a disclosure policy.

1 Top Growth Stock Down 60% to Buy Before It Soars