Microsoft (MSFT -2.03%) has finally picked a CEO to replace retiring leader Steve Ballmer. That's good news, and Microsoft shares spiked as much as 2.6% higher as the veil of uncertainty lifted. To put this jump into context, the Dow Jones Industrial Average (^DJI -1.03%) only moved 0.6% higher this morning. 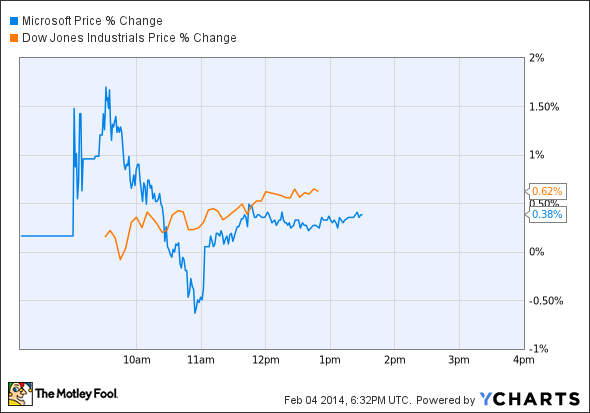 You see, Microsoft took the safe and predictable route. Satya Nadella, who becomes Microsoft CEO immediately, is a 22-year Redmond insider who is unlikely to shake the stagnant giant up very much. And a serious shake-up is exactly what this company needs right now.

Sure, Microsoft could have done a lot worse. Nadella steps up from leading Microsoft's enterprise and cloud computing group, as well as heading the server and tools division. These segments have outperformed Microsoft's Windows flagship under Nadella's leadership, and there's no question that a cloud computing focus will serve Redmond well for the next few years.

Another detail speaking in Nadella's favor is that Microsoft founder and guardian angel Bill Gates has stepped down as chairman of the board. Hence, the new chief executive might be able to get things done without Gates rubber-stamping every decision -- an uncomfortable possibility that may have kept several top candidates out of the running.

Is it all bad news?
So yeah, Nadella has a fighting chance to turn this sinking ship around. But it's far from a sure bet. Many factors still point to the status quo staying intact, no matter how much the new CEO promises to take Microsoft in a new direction. For example:

Will we get fooled again? I don't think anything changed for Microsoft today, and this stock will continue to weigh on the Dow for years to come.

I hope I'm wrong, and that Satya Nadella brings fresh thinking and execution to Microsoft despite the roadblocks he will face. Until I see actual proof of a new direction, I remain skeptical of Microsoft's value to investors.

Anders Bylund has no position in any stocks mentioned. The Motley Fool owns shares of Microsoft. We Fools may not all hold the same opinions, but we all believe that considering a diverse range of insights makes us better investors. The Motley Fool has a disclosure policy.