Volatility is back, with the Dow up 90 points after 300-point plunge on Monday.

Volatility is back on the market, with the S&P Volatility Index (^VIX 0.74%) rising 35% for the year. Yesterday, the index hit a one-year high of 21.91, but it is down 13% today to 18.53. The S&P Volatility Index is also known as the fear index; it tries to measure the expected volatility of the S&P 500 over the next 30 days. A level of 18 indicates the markets expect the standard deviation for the next 30 days will be 5.3%. Many traders have been betting on a resurgence in the fear index and a stock market correction, but 2013 was one of the least volatile years in recent memory. 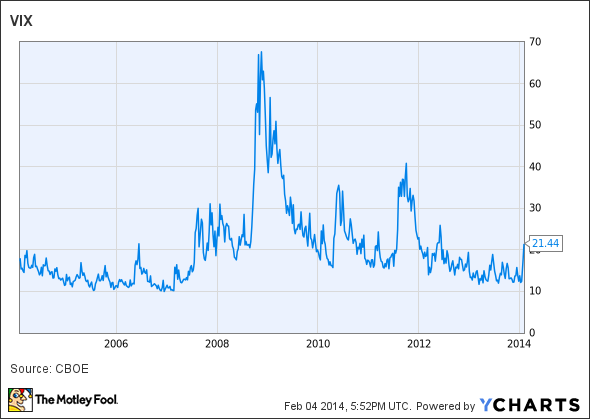 Fear has been coming back, though, as the Federal Reserve has begun to taper its asset purchases, leading to a flight out of emerging markets. The resulting currency troubles in some countries, notably Argentina and Turkey, are adding to the fear, as is the slowdown of growth in China and the nearing debt ceiling in the U.S. Last year, Congress suspended the borrowing limit though this Friday. The Treasury Department is expected to run out of money sometime in early March if the limit is not increased. Like last time, I expect Congress will wait until the last minute to raise the debt ceiling.

Volatility is not just drops in stock prices; it is also the expected variance, both positive and negative. Twenty-three of 30 Dow stocks are up for the day, with DuPont (DD) leading the way, up 3.40% to $62.01. Fool contributor Shamus Funk recently took a deep dive look at the company's agricultural operations, which you can read here. The company has been working to become more focused. It sold its performance coating unit in 2012 and announced in October that it will spin off its performance chemicals segment in 2015.

Is the Activision-Microsoft Deal Really in Danger?

These 2 Stocks Were on Big Shoppers' Lists on Black Friday