Kimberly-Clark Corp. shows potential as a defensive stock pick in an uncertain market. Should you invest?

It appears that the U.S. equity markets felt the chill of double "polar vortex" weather events last month, as the momentum of the prior year came to a sudden, cold halt. As is typical whenever a bull market's legs cramp up, investors of all sorts are calling up the charts of defensive stocks versus the S&P 500. Below is an example of the type of chart that may be popular at present: 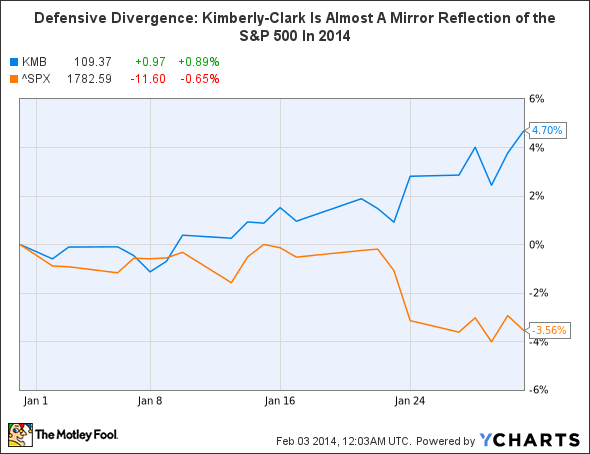 Kimberly-Clark Corp. (KMB 0.77%) outran the the S&P 500 index last month by a spread of 8.25%. Some of this performance may be due to a reflexive turn to safety, but as the year goes on, the quarterly financials of this company and other consumer staples will be read a little more closely. If you're thinking about rotating some of your investment dollars into Kimberly-Clark, what company-specific issues should you focus on? Recently, I discussed the benefits of Kimberly-Clark's business model, most prominently, its narrow concentration in paper-based and hygiene-themed products. Now it's time to look at a primary risk the company faces in 2014, and how this risk may affect your decision making.

Competition flaring up on all sides
During the company's fourth-quarter earnings conference call on Jan. 24, CEO Tom Falk provided illuminating detail on the competitors perceived to be threats in 2014. Fierce industry competition is a given in the consumer staples sector; indeed, as Falk memorably said, "Every day someone gets up and wants to eat our lunch."

Falk mentioned Procter & Gamble and privately held Georgia-Pacific as examples of significant adversaries in North America. But this really wasn't news to anyone on the call; a list of relatively unfamiliar names held considerably more interest.

For example, Falk cited an anticipated challenge from Japan-based Unicharm (UNICY 1.28%) in Brazil this year. Unicharm is a $5.8 billion conglomerate that looks a lot like Kimberly-Clark: It's narrowly focused, high-performing, and often competes in the high end of various markets.

While primarily concentrated in Asia, Unicharm has operations in 80 countries and seeks to expand its international presence. It is opening a new plant in Sao Paulo, Brazil, this spring to manufacture and sell premium disposable diapers. Kimberly-Clark and Procter & Gamble together control roughly 60% of the diaper market in Brazil.

At present, Unicharm's plans are modest: It wants to gain roughly $47 million in sales in Brazil in the next three years. More troublesome to Kimberly-Clark are the long-term implications of a well-run competitor establishing base camp in Brazil, the heart of the South American market.

Falk also mentioned competitive pressures from Empresas CMPC, a Chilean manufacturer of pulp, paper, and tissue products. Falk said CMPC is growing out of its traditional geographic footprint in the southernmost portion of South America, and expanding into other countries, including Mexico.

Flexibility to compete: The "FORCE to Inputs" ratio
Management sounded reasonably confident on the earnings call that it could meet the challenges in China, North America, and Latin America posed by its hungry adversaries. Part of this confidence stems from additional financial flexibility derived from its cost savings program, known as "Focused On Reducing Costs Everywhere," or FORCE.

Last year, the FORCE program delivered cost savings of $310 million, and it is projected to save at least $300 million this year. Quantifying and delivering cost savings is crucial for Kimberly-Clark, as the practice can alleviate the effect of rising commodity prices. Less diversified than peers such as Procter & Gamble, the company is vulnerable to the price of pulp and similar raw materials, as so much of its business is paper-based.

During 2013, the company experienced $205 million of input (raw materials) cost inflation. The $310 million of total cost savings outpaced input inflation by 1.5 times. Maintaining this basic relationship provides financial flexibility and gives management the confidence to adjust product pricing in various markets to protect its market share. Let's coin this ratio, specific to Kimberly-Clark, for just this year, as the "FORCE to Inputs" ratio. We can revisit it each quarter to see if management can maintain this competitive edge.

Keep this stock on your short list
At the outset of this year, Kimberly-Clark appears ready to engage in the ground skirmishes necessary to protect its interests. It's possible that the company's stock may get punished in the general flight from companies with exposure to emerging markets, although Kimberly-Clark occupies high-demand niches such as baby care in many of these youth-propelled markets. With a significant dividend yield of 3%, and a trailing-12-month price-to-earnings valuation in line with more diversified peers, Kimberly-Clark is worthy of a spot on your watchlist for 2014.

Asit Sharma has no position in any stocks mentioned. The Motley Fool recommends Kimberly-Clark and Procter & Gamble. We Fools may not all hold the same opinions, but we all believe that considering a diverse range of insights makes us better investors. The Motley Fool has a disclosure policy.