The EIA sees huge import demand for oil and natural gas out of China, India, and Europe -- that spells opportunity for oil and gas drillers.

The United States has seen a virtual explosion in the domestic supply of oil and natural gas. In fact, the Energy Information Administration (EIA) expects the country to be a net exporter by 2020. China, India, and parts of Europe, however, will see their dependence on imported oil and gas increase. That's a big opportunity for these five companies.

Importing everything
Japan has few natural resources. On the energy front, it has to import just about everything. The closure of its nuclear fleet has made this situation even more problematic. It posted a record trade deficit in 2013 largely because of the increased need for energy imports. For example, oil imports rose 16% in 2013 alone.

Japan's post-Fukushima energy troubles show the impact that energy demand can have on an economy. That's why it's nice to see the EIA calling for the United States to be a net exporter of oil and gas by 2020. And, perhaps more importantly, there will be plenty of countries to send the fuels to besides Japan.

China, India, and key markets in Europe are all expected to see their import needs increase over the next five to 10 years. China alone is expected to see "the largest absolute growth in liquid fuels consumption, growing by about 46% by 2020 and doubling by 2040 from 2010 levels." 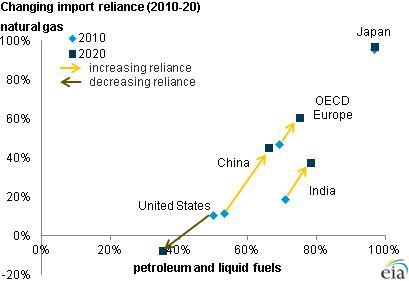 Acting now
That helps explain why mining companies Freeport-McMoRan Copper & Gold (FCX -1.03%) and BHP Billiton (BHP 0.42%) have shifted gears and started to drill for oil and natural gas. Freeport-McMoRan made the big move in mid-2013 when it bought Plains Exploration & Production and McMoRan Exploration for about $19 billion, combined. The new division now accounts for about a quarter of the company's business. Investors seemed to like the business shift, with the shares starting to move higher almost exactly when the deal was consummated.

BHP made its big move earlier, buying Petrohawk Energy for around $15 billion in 2011. Like Freeport, oil and gas now make up about 25% of the miner's business. That puts these companies in solid position to benefit as demand for oil and gas increases in key markets. Teck Resources (TECK 1.49%) is going the same route, but it's sticking to mining since it will be a partner in a Canadian oil sands venture.

Teck's project keeps it in its mining comfort zone, a benefit since drilling and mining are quite different skill sets. And it's expected to start producing oil in around 2017, which means Teck's oil will hit the market at just the right time. Freeport-McMoRan and BHP Billiton will clearly benefit sooner, but the impact at Teck could be much larger since it will be an organic project that introduces a completely new commodity to the mix.

Oh, and don't forget these guys...
These "new" players are clearly looking to take advantage of oil and gas demand growth. However, that doesn't mean that entrenched giants like ExxonMobil (XOM -2.78%) and Royal Dutch Shell (RDS.B) won't see their fair share of benefit. In fact, both companies have made a big bet on U.S. natural gas that could turn from trouble spots to big winners if export facilities start to open the largely closed U.S. gas market to the world.

One of the big benefits that these two giants have is the extensive reach of their existing operations and relationships. Shell's production, for example, is split about 50/50 between oil and gas, and it has operations in more than 70 countries. ExxonMobil's global footprint is equally impressive.

The big trend
The EIA's statistics are all about the big picture, and when it comes to oil and natural gas, that's a beautiful sight to behold -- if you sell the fuels. BHP Billiton, Freeport-McMoRan, and Teck are all new to the game, but are positioning well for what's likely to be a positive demand environment. ExxonMobil and Shell, meanwhile, are old favorites that are still doing the right things. All five are worth a deeper dive.

Warren Buffett has been buying into energy lately. What else can we learn?

Reuben Brewer has no position in any stocks mentioned. The Motley Fool owns shares of Freeport-McMoRan Copper & Gold. We Fools may not all hold the same opinions, but we all believe that considering a diverse range of insights makes us better investors. The Motley Fool has a disclosure policy.