Please ensure Javascript is enabled for purposes of website accessibility
Log In Help Join The Motley Fool
Free Article Join Over 1 Million Premium Members And Get More In-Depth Stock Guidance and Research
By Alex Planes - Feb 4, 2014 at 11:00AM

Last year lulled a lot of investors into believing that calm was the new normal, but it's probably time to get used to ups and downs again.

The Dow Jones Industrial Average (^DJI 1.27%) was rather depressingly down yesterday. It hasn't quite recovered from that 2% drop -- the first one since last October -- but at least investors can take a breath today after watching the index fall nearly 7% since topping out at roughly 16,500 points in mid-January. This is certainly no reason to panic, but it's also important to put the market's recent moves in perspective.

The Dow has already endured five drops of 1% or greater in 2014. By the same point in 2013, the blue-chip index had not even seen a single drop of that amount. The first 1% decline last year hit the Dow on Feb. 25, and over the course of the year the index lost 1% or more just 10 times. The Dow hasn't yet finished up 1% in any trading day this year, which is a bit worrisome, as it enjoyed 14 trading days of 1% or greater gains last year, including two by the first week of February. Let's hope that these winter woes aren't indicative of the rest of the year; if they are, we're in for 52 more days of 1% daily declines in the Dow, but no 1% daily gains.

Fortunately, that sort of bad luck would be impossible. Even the worst years have at least a few big pops.

However, a year in which the Dow moves up or down by 1% 57 times would be exactly in line with historical averages, as Fool analyst Morgan Housel found while examining annual volatility all the way back to the Great Depression. More volatility doesn't have to mean lower gains, either, as many of the market's best years experienced an above-average number of daily 1% moves.

Today's big winner
Anyone talking about a retail slowdown needs to leave Michael Kors (CPRI 1.57%) out of the discussion. The luxury retailer blew the doors off with its latest earnings report. Kors' earnings of $1.11 per share for the fiscal third quarter came in 73% higher than last year's $0.64 result, and also soared 29% above analysts' expectations of $0.86 per share. Kors' quarterly earnings have now surged 455% above where they were just two years ago, and the stock has actually fallen behind that blistering pace (the chart below has not yet been updated to include today's results): 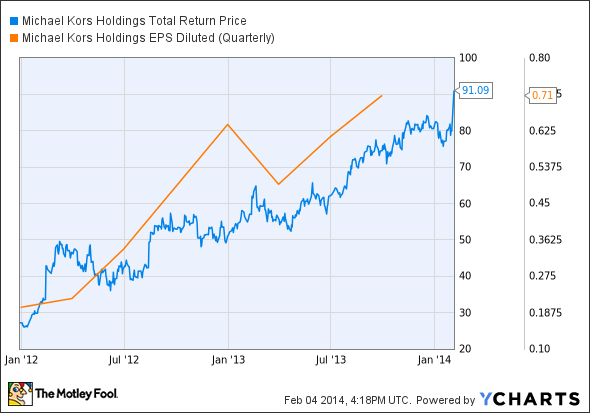 There's still upside ahead, as Kors is valued at a reasonable forward P/E of 30, based on full-year earnings-per-share estimates of $3.07 to $3.09 for the fiscal year that will end in March.

Today's historical tidbit
Don't forget to click "Like" on this article when you're done reading, because today we're celebrating the 10th anniversary of Facebook's (META 1.70%) creation. The $150 billion social network is having a great birthday, as it recently reported blowout earnings and enjoyed a massive stock surge.

Ten years ago, Mark Zuckerberg was an undergraduate at Harvard who'd just hacked together a social network out of the ruins of a photo-rating site called Facemash, which had been so popular that it overwhelmed the university's network. Today, he's worth about $31 billion. Not bad for a decade of work, wouldn't you say?

The Motley Fool recommends Facebook and Michael Kors Holdings. The Motley Fool owns shares of Facebook. Try any of our Foolish newsletter services free for 30 days. We Fools may not all hold the same opinions, but we all believe that considering a diverse range of insights makes us better investors. The Motley Fool has a disclosure policy.