Learn how Lenovo plans to use Google's Motorola Mobility to become a global leader in the competitive smartphone market.

Lenovo's recent acquisitions show the company's strong will to go beyond PCs and become an important player in the global market for smartphones and servers. However, Lenovo may have a hard time competing against mobile giants Samsung and Apple for market share in smartphones. Can Lenovo transform money-losing Motorola Mobility into a profit-generating business unit, and at the same time, turn around IBM's low-margin server business? 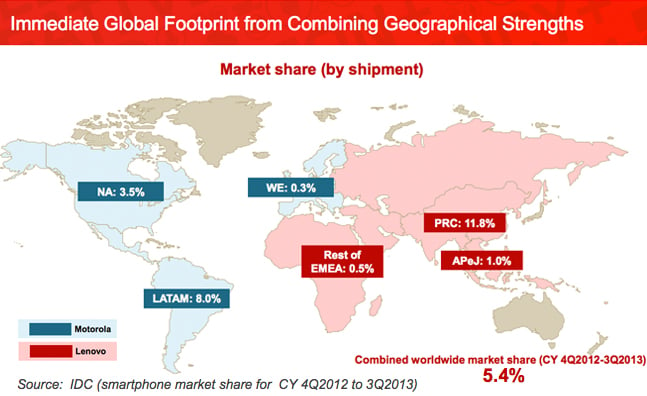 Beyond PCs
In the face of a shrinking PC industry, Lenovo knew that it would have to enter new markets in order to sustain revenue growth. That's why the company decided to manufacture smartphones, inspired by the massive success of Apple and Samsung. At the same time, Lenovo got interested in manufacturing and selling low-end servers as a way of entering the huge market for enterprise technology.

Aiming to replicate its PC success in the smartphone world, the company adopted an aggressive pricing strategy, which -- combined with high quality standards in product design and manufacturing -- allowed Lenovo to quickly capture market share in emerging economies like China. This helped the company to become the world's fourth-largest smartphone maker, according to IDC Research.

The missing piece
Still, Lenovo's market share for the fourth quarter of 2013 was only 4.9%, well below Samsung's 28.8% and Apple's 17.9%. Moreover, most of Lenovo's customers are concentrated in China.

In this context, the company realized it had to accelerate its mobile plans by acquiring a mobile manufacturer with high exposure to western markets, like BlackBerry or Google's Motorola Mobility. Only such a move could allow Lenovo to quickly expand its smartphone sales beyond China, where it has been the second-largest smartphone player since 2012.

Motorola Mobility was particularly attractive to Lenovo's management, due to the company's strong relationships with retailers and carriers in North America and Latin America. Further, by acquiring Motorola Mobility, Lenovo is getting access to more than 30 years of expertise in the mobile industry, robust research and development, and a portfolio of well-known products with strong brand awareness.

In a way, the Motorola Mobility deal offered Lenovo similar capabilities and assets to what IBM offered the Chinese manufacturer back in 2004, when Big Blue sold its PC unit to Lenovo.

Foolish takeaway
Lenovo is one of the most ambitious tech companies in the world. The company is adept at transforming older brands into revenue-generating machines -- which is how it became the world's biggest PC manufacturer after the IBM unit acquisition.

Now, the company wants to use its tech expertise, aggressive pricing strategy, and high quality standards in manufacturing to win in the global smartphone market.

From Google's point of view, the Motorola Mobility acquisition may be a blessing, as the company is getting rid of a division that loses money. Google now can devote more resources to Android. For Lenovo, there are plenty of risks, like the possibility of a corporate culture clash, dealing with low margins for several quarters, or the absence of an economic moat.

That being said, investors should not underestimate Lenovo's ability to turn around businesses. After all, 10 years ago, nobody would have suspected Lenovo would end up becoming the world's biggest PC maker by transforming IBM's iconic ThinkPad brand into a revenue-generating machine, beating well-known competitors such as Dell and Hewlett-Packard.

Adrian Campos has no position in any stocks mentioned. The Motley Fool recommends Google. The Motley Fool owns shares of Google and International Business Machines. We Fools may not all hold the same opinions, but we all believe that considering a diverse range of insights makes us better investors. The Motley Fool has a disclosure policy.

My Top Tech IPO to Buy in December