The exodus of firearms manufacturers from states that enact more restrictive gun-control laws is turning into a stampede. Beretta announced last week it was becoming the latest gun maker to expand beyond the borders of its home state following passage of tougher gun laws. Instead of building in Maryland, which adopted stiff new regulations last year, Beretta is putting up a new manufacturing and research facility in the Nashville, Tenn., suburb of Gallatin.

The company had telegraphed its decision, noting last year that while it wouldn't leave its primary digs anytime soon, any expansion would occur someplace that has "shown consistent, strong support for Second Amendment rights." New York-based Remington Arms is also looking at expanding into Tennessee, and from Texas to Wyoming, pro-gun states are seeing an influx of gun makers who feel they're unwanted in places they've operated in for decades.

Sturm, Ruger (NYSE:RGR), for example, was founded in Connecticut in 1949 but announced last summer that North Carolina would be home to its first major expansion in 25 years. Meanwhile, Colt Manufacturing, which has also called Connecticut home since Samuel Colt began making breech-loading revolvers in Hartford in the 1840s, is angling to set up shop in the friendlier climes of Florida.

Although there has long been a struggle between gun-control activists and Second Amendment defenders, the debate's intensity has boiled over in the wake of the 2012 Sandy Hook school shooting in Newtown, Conn. Not surprisingly, Connecticut has subsequently passed some of the most restrictive laws in the country, but states including Colorado, Maryland, and New York have followed suit.

It was Colorado's new gun legislation that banned the sale of magazines that hold more than 15 rounds that led magazine maker Magpul Industries to pull up stakes and head to Texas. Separately, sporting rifle maker PTR Industries moved out of Connecticut to South Carolina. Stag Arms will also expand outside of Connecticut, and Kahr Firearms Group crossed the Delaware River to Pennsylvania from its previous home in New York.

Although mass shootings like the one in Newtown grab headlines, firearm-related homicides remain a tiny portion of total deaths in the U.S. and have actually been on the decline for almost two decades, despite greater sales of guns.

The Justice Department's Bureau of Justice Statistics reported last year that "firearm-related" homicides fell 39% between 1993 and 2011, and "nonfatal firearm-related violent victimization against persons aged 12 or older" dropped 70% over the same time period. Although the FBI's statistics only go back to 1999, the number of background checks the agency has performed for individuals wanting to buy a gun mushroomed from 9.1 million that year to more than 21.1 million last year. 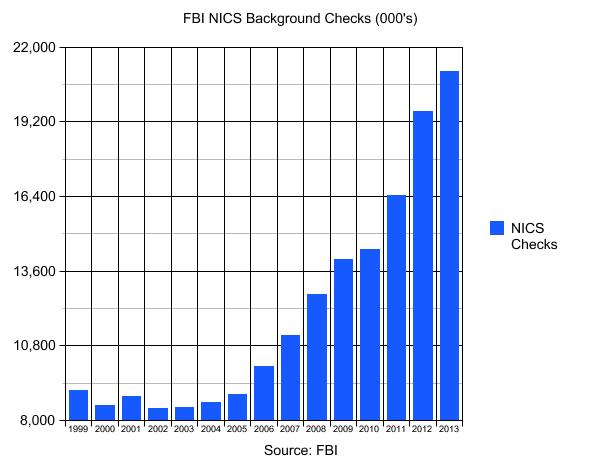 Even though the FBI says a background check doesn't necessarily translate one-to-one into a gun purchase, it's safe to assume that someone going through the paperwork and expense of a background check is more than just a little interested in making a purchase. Ruger recorded $180.1 million in firearms sales in 1994 and $485 million in 2012, but only started reporting the number of units produced a decade ago. From 2004 to 2012, the number of firearms manufactured quadrupled from 414,600 to 1.7 million units, yet there were nearly 2.9 million units ordered in 2012. Demand was so hot, in fact, that Ruger was forced to suspend sales for a time until it could catch up.

According to the Bureau of Alcohol, Tobacco, Firearms and Explosives, the U.S. firearm manufacturing industry grew at a compound annual growth rate in units of 12% from 2006 through 2011. Although retailers like Cabela's and Dick's Sporting Goods reported that firearms sales slowed in the second half of last year, mimicking the 10% year-over-year slowdown in NICS background checks, both Sturm, Ruger and Smith & Wesson have significant backlog to carry them forward.

As the old legal adage goes, hard cases make for bad law, and likewise, legislation passed following a horrific crime runs the risk of playing to the passion rather than to good sense. Yet so long as states continue to adopt restrictive gun measures, we'll keep seeing gun makers like Beretta make the ultimate statement about these laws and vote with their feet.