Apple's larger iPhones could represent a share gain opportunity worth over $18 billion.

Back in December, Samsung (NASDAQOTH: SSNLF) announced that its Galaxy Note III "phablet" sold a whopping 10 million units in 60 days. Tim Worstall, contributor at Forbes, astutely pointed out that this represented roughly half of Apple's (AAPL -0.34%) quarterly smartphone sales. Now, of course, it's a bit unfair to look at sales of iPhones at the end of a product cycle with sales of a device that had just launched, but the more salient point is that between the Galaxy S and Note lines, Samsung sold about 100 million premium smartphones in 2013.

100 million -- that's a lot
Tallying up Apple's iPhone sales during 2013, it sold -- across all of its iPhones -- about 150 million units. Now, this is downright scary for Apple since Samsung sells roughly two-thirds of the high end units that Apple sells and an additional 200 million or so "cheaper" smartphones. Samsung is, by all counts, a behemoth and Apple investors would be wise to mind the threat from this South Korean giant. 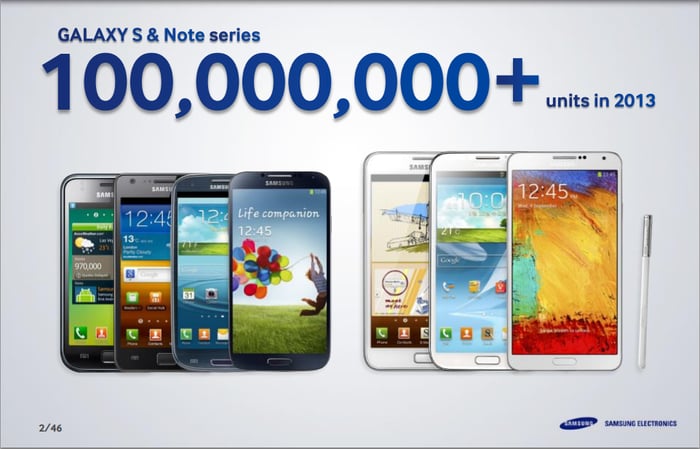 A big part of its large sales volume is driven by Samsung's amazing breadth of products and variants of each of its lines. While Apple has stubbornly refused to do multiple screen sizes of the iPhone, Samsung has the following in its Galaxy S4 lineup:

In addition, Samsung also sells the Galaxy Note III phones for users who want an even larger screen. In short, Samsung offers product at every (reasonable) screen size depending on what that particular user's tastes are. This has allowed Samsung to sell almost as many "high end" devices as Apple. Crazy, right?

The good news for Apple
While this may seem like bad news for Apple, the good news is that Apple now has ample opportunity to take back share from Samsung's Galaxy S and Galaxy Note lineups. Especially if the rumor that Apple will launch a pair of iPhones is true. The "smaller" variant is expected to be between 4.7 to 4.8 inches, feature a 1920x1080 display, 2GB of RAM and an A8 processor. The larger variant weighs in 5.5 inches and 2272x1280 display.

Not only will this help Apple compete in the "spec wars", but this broadened product lineup (likely with the iPhone 5s offered at a discounted price) will allow Apple to more effectively compete and take share from Samsung -- locking in even more of the smartphone profit pie.

What if Apple takes 30% of Samsung's high end share?
Suppose, now, that Apple manages to take 30% of the Galaxy S and Note share with the iPhone 6 lineup. This could represent an incremental 30 million units. Assuming that Apple can maintain an average selling price of $600 per phone, this works out to be around $18 billion in revenue.

Assuming minimal incremental operating expenses and a gross margin of 37% (the low end of Apple's range), this works out to be about $6.66 billion in additional gross profit. At a 25% tax rate, this comes to $5 billion in additional net income or $5.60 per share. Multiplying this by a conservative earnings multiple of 12 and it would be good for a $67 per share increase in the company's stock price.

Foolish bottom line
The iPhone 6 might have a massive opportunity if it simply adds more screen sizes. While the next-generation iPhone is likely to sport far more in the way of enhancements (which would help in driving share gains), the form factor is huge. Also, Apple is likely to do something interesting with iOS 8 to come with the next-generation iPhones, which could further secure Apple's moat.

While not a "sure thing," Apple's shares do look cheap here, and frankly, if the new phones take share as many (including this Fool) expect, then Apple could very well top $600 again. That's a healthy premium to today's $510 share price.

Stocks to Be Thankful for and Stocks to Avoid