Please ensure Javascript is enabled for purposes of website accessibility
Log In Help Join The Motley Fool
Free Article Join Over 1 Million Premium Members And Get More In-Depth Stock Guidance and Research
By Brendan O'Boyle – Feb 5, 2014 at 3:00AM

Mobile advertising is still in its infancy and could be a major growth industry in the next few years. Which companies will successfully monetize mobile?

Facebook (META -0.74%) reported earnings this week that blew away consensus expectations with remarkable revenue growth of 55% in fiscal 2013 ($7.87 billion, up from $5.09 billion one year earlier). All the more remarkable is that this turbocharged revenue growth has been fueled by mobile ad revenue, even as user growth has slowed. Mobile ad revenue accounted for 53% of Q4 2013 revenue, up from 23% only one year earlier. Facebook stock has already surged by nearly 15%. Given Facebook's successful monetization of mobile, it may be worth considering other stocks such as Baidu (BIDU -3.75%), Google (GOOGL -1.02%), and Yahoo! (NASDAQ: YHOO) all of which may be able to follow Facebook's lead and further optimize their mobile revenue.

What is Facebook doing right?
It is worth remembering that the monetization of mobile was a key uncertainty for Facebook in the not-too-distant past. In fact, as the user base rapidly converted to mobile, many worried that the company would lose profitability since, at that time, mobile did not garner much revenue compared to desktop advertising. But, Facebook was able to monetize mobile with organic-seeming "sponsored stories." These paid ads are now displayed in a users news feed, as opposed to their position in the prior user interface, which caused many to avoid Facebook's mobile app.

What companies may follow in Facebook's footsteps?
Baidu is a company still in the early innings of mobile monetization, with mobile ad revenue accounting for 10% of 2013 revenue. After initial disappointment in the mobile space, the company has aggressively spent on improving its mobile experience.

In addition to its nascent monetization of mobile, Baidu also has spectacular revenue growth of 42%, reported in Q3 2013 from one-year earlier. As a Chinese tech stock, Baidu is certainly a high-risk venture, but at around 30 times forward earnings, buyers aren't paying much for supercharged growth. As can be seen in the chart below, revenue growth has remained strong, while the earnings multiple remains low. 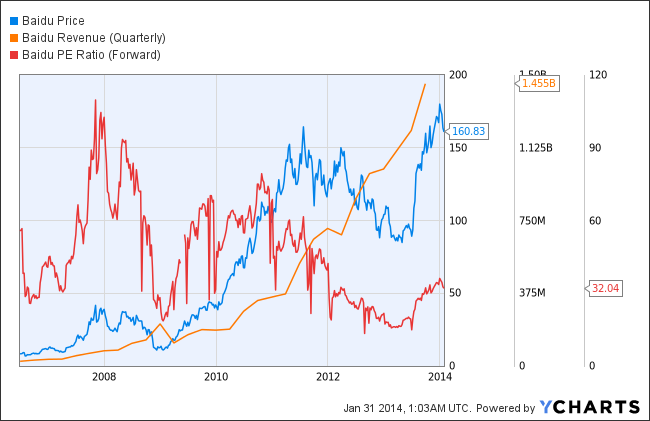 Google, the world's largest search company, also struggled to gain a foothold in mobile. However, mobile ad revenue accounts for 19% of total revenue and is projected to grow to 31% by 2015, up from only 5% in 2011. Again, the lack of a successful mobile strategy held Google's stock price back in the last several years.

Google has yet to introduce something as seamless as advertising for its desktop, but perhaps Facebook's success will provide some inspiration. The company trades for approximately 30 times trailing earnings, with prior year revenue and net income growth of 18%.

Yahoo!'s mobile ad penetration has been the weakest. The company was reported to have only $125 million in mobile revenue out of total revenue of $4.99 billion, or 2.5%. Indeed, the Sunnyvale, California company has struggled to generate revenue growth of any kind over the past year. In the most recent quarterly report, Yahoo! reported full-year 2013 revenue of $4.68 billion, down from $4.99 billion in 2012, a decrease of 6%. While mobile should continue to be a priority for Yahoo!, investors should wait to see execution.

The bottom line on top line mobile growth
Facebook has shown how a successful mobile strategy can be transformational and turn healthy growth into supercharged growth. It seems likely that other companies will soon follow in Facebook's footsteps, and it would not be surprising to see many Internet companies like the ones above have greater than one-third of revenue coming from mobile within the next few years. This trend means that mobile growth is here to stay, and my favorite company to capitalize on it is Baidu. Baidu seems further along in the implementation of its mobile strategy compared to Google, and should be able to follow in Google's footsteps to take its 10% mobile share to 20%, then beyond.