Please ensure Javascript is enabled for purposes of website accessibility
Log In Help Join The Motley Fool
Free Article Join Over 1 Million Premium Members And Get More In-Depth Stock Guidance and Research
By Dan Moskowitz – Feb 5, 2014 at 10:00AM

Dunkin’ Brands has hidden on the East Coast for decades, but it’s about to come out of its shell. There are several reasons to think this domestic expansion, as well as international expansion, will be successful.

The first Dunkin' Donuts opened in Quincy, Mass. in 1950. Considering Dunkin' Donuts is 64 years old, you certainly wouldn't think of Dunkin' Brands Group (DNKN) as a growth company. However, Dunkin' Donuts has been an East Coast brand for decades. Previous attempts at geographic expansion failed but mostly because franchisees weren't carefully selected. This led to a much lower success rate than the company had anticipated.

Today, Dunkin' Brands selects its franchisees very carefully, only accepting those with business experience, a proven track record, and adequate funds. Today's franchisees are also more thoroughly trained. These efforts have paid off. Dunkin' Brands is pleased with the early stages of its Dunkin' Donuts westward U.S. expansion. If new Dunkin' Donuts restaurants continue to perform well and the company's unit growth plans come to fruition, then you could be looking at a company that's likely to see considerable success.

Domestic growth potential
In 2013, Dunkin' Donuts saw net store growth of 371. If you live in Texas, Colorado, New York, or Utah, then you might have noticed a new Dunkin' Donuts open near you.

In 2014, domestic net store growth is expected to reach between 380 and 410. Over the long haul, Dunkin' Brands wants to have a total of 15,000 Dunkin' Donuts locations in operation in the United States, 1,000 of which will be in California.

These might seem like lofty goals, but Dunkin' Donuts is a strong brand name. In addition to a more selective franchisee-recruitment process, Dunkin' Donuts has established a strong social media presence, and it's now more well known for its coffee than its donuts. With caffeine being mildly addictive, this is a good sign for Dunkin' Brands.

International growth potential
In 2013, Dunkin' Donuts saw net store growth of 138, with the greater London area and Ho Chi Minh City seeing their first Dunkin' Donuts restaurants. Of course, there's no telling if Dunkin' Donuts will resonate well with consumers in the United Kingdom and Vietnam, but Dunkin' Brands wasn't overambitious. Instead, it will see how these first units perform and then determine whether or not further expansion is a good idea.

Germany is the strongest economy in Europe, and China is seeing a great deal of urbanization, which is leading to higher incomes and increased spending. Therefore, Dunkin' Brands seems to have made a strategic move by expanding into these two countries.

The above information isn't meant to leave out Baskin-Robbins, which is performing well internationally and potentially seeing a turnaround domestically. Nevertheless, Dunkin' Donuts is the key growth driver by a wide margin.

While growth potential is excellent for Dunkin' Brands, that doesn't guarantee it's the best option in its peer group.

Starbucks is one of the most well managed companies in the world, but that doesn't mean only Starbucks or Dunkin' Brands are capable of thriving. While they're capable of stealing market share from one another, they target different types of consumers, and they can both succeed simultaneously.

McDonald's is struggling to attract new customers domestically, which should come as no surprise given the rise of the health-conscious consumer and its unhealthy image.

Krispy Kreme Doughnuts seems to have risen from the ashes, but a brand that has failed once before -- regardless of the reason -- is a brand that I will always exclude from my watchlist.

Below is a five-year revenue chart for the aforementioned companies: 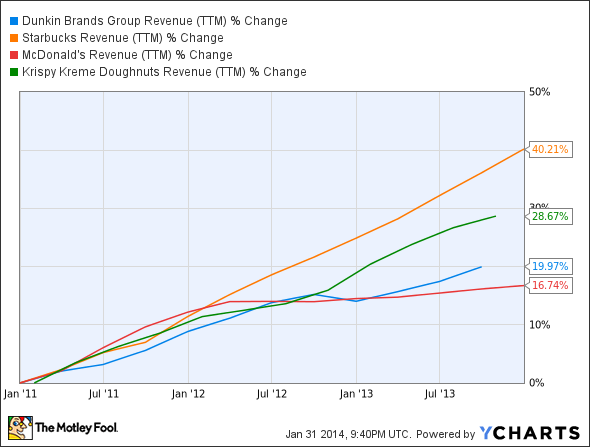 Starbucks is the most impressive on the top line, and despite concerns that it's not likely to see future growth, it's well situated in China -- catering to local consumer demands -- and CEO Howard Schulz is a proven winner. In most cases, it's not about whether or not a company is capable of continuing its growth based on recent numbers, but who's running the show. Schulz is a problem solver. If Starbucks were to falter, odds are good that he would figure out a solution. And it's not as if Starbucks is suffering. However, Starbucks is trading at 464 times earnings, which isn't comforting.

Krispy Kreme has already been discussed, and it's trading at 50 times earnings. McDonald's is only trading at 17 times earnings, but you're not going to see much growth in the near future. Brand transformation will take years. Dunkin' Brands is trading at 36 times earnings, which is somewhat expensive, but given the company's growth potential, I'd be willing to pay that premium. However, please do your own research prior to making any investment decisions.