Casey’s expansion, valuation, and dividend are reasons why the company could be a good investment.

Convenience stores such as Casey's General Stores (CASY -0.28%) have a unique business model that keeps them insulated from the price wars of the larger chains like Kroger and Wal-Mart (WMT -0.10%). The majority of its stores are in regions with a population of 5,000 or less, and these spots might not be very profitable for big-box retailers with huge store sizes. On the contrary, Murphy USA (MUSA -0.24%), another convenience store, has gas stations in Wal-Mart's parking lots.

According to a survey, the convenience store market size was around $575.6 billion in 2010. It is expected to grow at a compound annual growth rate of 11% during the period 2011-2014 to reach a market size of $856 billion. Total convenience store sales include fuel as well as in-store sales. These stores are very popular with consumers who are pressured for time, as they have to spend less time shopping.

Casey's business model has served it well over the years, and it has outperformed its peers as shown in the chart below. The company managed to maintain the growth momentum from the first quarter of fiscal 2014 into the second quarter also. 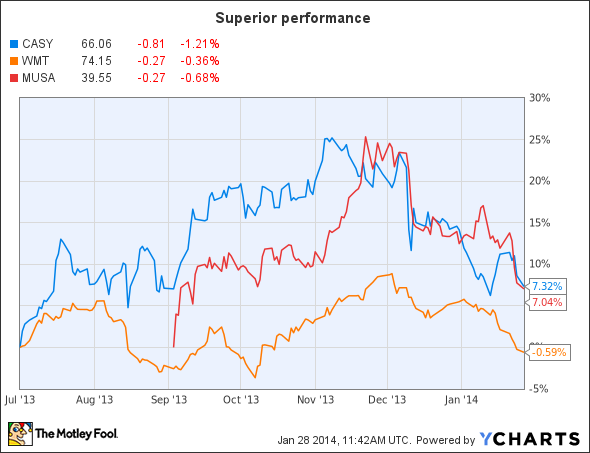 Impressive performance from Casey's
Gas stations are a highly competitive and low-margin business. During the second quarter, Casey's experienced a solid fuel margin environment, resulting in an average margin of $0.167 per gallon compared to $0.149 per gallon in the same period a year ago. The second-quarter margin expansion was due to an increase in the value of renewable fuel credits, or RINs, versus the year-ago quarter. RINs were trading at around $0.35 as compared to $0.05 during last year's third quarter. For fiscal 2014, the fuel margin is at $0.194 per gallon, ahead of the annual target.

Also, the fuel-saver program that Casey's implemented in December in partnership with Hy-Vee continues to do very well. Same-store gallons sold in stores, or comps, that participated in the fuel-saver program increased about 7% in the second quarter, resulting in overall same-store gallons sold in the quarter climbing 4.2% versus the year-ago quarter.

The grocery and other merchandise comps grew 10.2%, and this was more than what the company had aimed for. The prepared food and fountain category continued its strong performance and registered comps growth of 12.3%. The increase in fuel-gallon sales favorably affected the other two segments of the company also, although there's no quantification by the management as this information is difficult to track.

On the back of strong performance across all segments, and 5.5% revenue growth versus the year-ago quarter, Casey's second-quarter earnings per share soared 24% to $1.06 compared to $0.85 a year ago. However, it couldn't sustain the momentum of the positive earnings surprises of the last four quarters in the second quarter, primarily because of lower fuel prices, increased operational expenses and new stores, and an increase in meat prices.

About half of comps growth has been due to unit growth, including the addition of 57 additional stores to the pizza-delivery program, 94 locations converted to a 24-hour format, and 25 major remodels. During the remainder of this fiscal year, Casey's plans to add 50 more stores to the pizza-delivery program in January and convert about another 10 stores to 24-hour format. Through these growth initiatives, it aims to increase its market share in the $856 billion convenience-store market space.

A look at peers
Murphy USA, a spin-off from Murphy Oil, operates most of its gas stations in Wal-Mart parking lots and at stand-alone locations near them. It has a model similar to Casey's and enjoys a healthy margin in sodas and foods while selling fuel at low margins.

Murphy owns and operates more than 1,100 gas stations nationwide, compared to Casey's roughly 1,770 locations. It has barely been four months as an independent, publicly traded company for Murphy USA, and it has a lot of catching up to do with Casey's. However, Casey's must be watchful of its rival's plans in addition to what Wal-Mart and other big-box retailers are doing to target the low population density areas.

For example, according to Bloomberg Wal-Mart is stepping up its game in residential areas. The retailer is also looking to make groceries more affordable by spending $6 billion to cut prices. In addition, Wal-Mart's "great gas rollback" program, which enables customers to save $0.10 to $0.15 per gallon on their fuel purchase, would be another point of concern for Casey's and Murphy as the retail giant expands into neighborhoods.

Bottom line
Casey's has been doing well in the convenience-store space and has outperformed peers. Looking at the company's expansion moves, it can grow further. Casey's is also not very expensive; a P/E ratio of 18.8 and a dividend yield of 1.1% make it a sweet deal that could reap results in the long run.