Please ensure Javascript is enabled for purposes of website accessibility
Log In Help Join The Motley Fool
Free Article Join Over 1 Million Premium Members And Get More In-Depth Stock Guidance and Research
By Leo Sun – Feb 5, 2014 at 10:59AM

Valeant just made its first acquisition of the year. Let’s take a closer look at three companies -- Allergan, Actavis, and Zeltiq -- which could be threatened by the company’s inorganic growth.

Valeant Pharmaceuticals (BHC 2.22%) just announced it will acquire PreCision Dermatology, a maker of dermatology products, for $475 million in cash, along with an additional $25 million sales-based milestone.

That acquisition is the latest in a long series of Valeant's strategic acquisitions, which have made the company a force to be reckoned with in cosmetics, pharmaceuticals, medical equipment, and eye care products (Bausch & Lomb).

Valeant has announced over $9 billion in deals over the past 12 months, compared to a mere $944 million spent by competitor Allergan (NYSE: AGN). 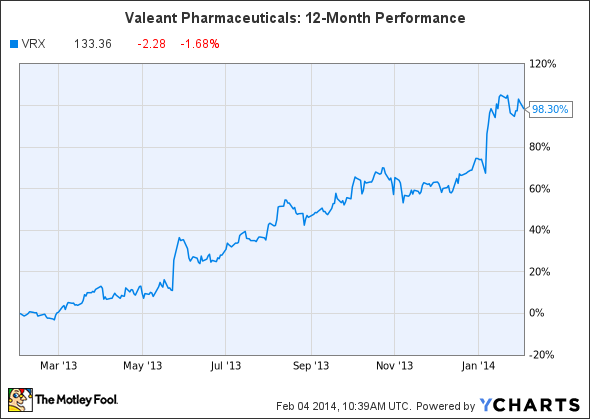 Investors seem to have faith in Valeant's business plan, and shares have soared nearly 100% over the past 12 months, even though its big acquisitions caused the company to report a net loss of $2.92 per share last quarter. Revenue, however, surged 74% year-over-year.

Let's take a closer look at Valeant's history of inorganic growth, and how this growing giant could soon threaten three companies in particular -- Allergan, Actavis (AGN), and Zeltiq Aesthetics (ZLTQ) -- in the coming year.

Valeant vs. Allergan
Allergan, the company best known as the maker of the skin tightener Botox, stands to lose the most from Valeant's growth.

Botox accounts for roughly a third of Allergan's revenue and is used for both cosmetic and therapeutic purposes. Botox's popularity, however, eventually attracted competition from Merz Pharmaceuticals' Xeomin and Medicis Pharmaceutical's Dysport.

To compete against Allergan, Valeant acquired Medicis in December 2012 for $2.6 billion, adding Dysport and several other dermatological treatments to its portfolio. Under Valeant's guidance, Dysport is gaining traction with both patients and doctors, thanks to aggressive rebates (started by Medicis in 2010) and a cheaper price per unit.

Dysport costs $3.99 per unit compared to Botox's price of $9.99 per unit. However, the definition of a "unit" has been debated, as some physicians believe that 2.5 to 3.0 units of Dysport are equivalent to a single unit of Botox. Reportedly, the average savings per Dysport injection is around 10%, and a full treatment costs around $300.

Although Valeant hasn't reported Dysport sales separately yet, these marketing and cost-reduction moves may mean that Dysport represents a major threat to Botox's annual sales of nearly $2 billion.

Valeant vs. Actavis (and the rest of the generics industry)
Meanwhile, Valeant's aggressive growth can be considered a direct response to generics giant Actavis, which also has a streamlined plan for inorganic growth.

Actavis, formerly known as Watson Pharmaceuticals, was renamed after acquiring Actavis in October 2012 for 4.25 billion euros ($5.7 billion). That acquisition made Actavis the third largest pharmaceutical company in the world. It followed that up with the acquisition of Warner Chilcott for $8.5 billion in May 2013, which added women's health care and dermatological drugs to its portfolio. More importantly, it allowed Actavis to relocate to Ireland to take advantage of the lower corporate tax rate.

Valeant, on the other hand, isn't even one of the top 10 generics makers by 2012 revenue. That market is dominated by Teva, Novartis' Sandoz unit, Mylan, Abbott Labs, and Actavis, in that order.

By comparison, Teva reported $10.4 billion in generics revenue, while Actavis reported $4.4 billion in 2012. Therefore, it would make strategic sense for Valeant to follow in Actavis' footsteps and acquire a large generics company to increase its footprint.

The most logical option is for Valeant to acquire Pfizer's (PFE 0.74%) generics business, which generated $7 billion in sales (18% of Pfizer's top line) during the first nine months of fiscal 2013. Starting in fiscal 2014, Pfizer will split its business into three divisions -- two for patent-protected brands and one for generics.

According to a Reuters report last month, Valeant, Actavis, and Mylan are all interested in acquiring Pfizer's generic business. If Valeant succeeds at outbidding its rivals, it could instantly become one of the largest generics companies in the industry.

Liposonix uses high intensity ultrasound waves to permanently eliminate fat cells and reduce waist size, representing a non-invasive alternative to traditional liposuction. The disrupted fat cells are then eliminated by the body's own immune system over an 8 to 12 week period, during which a patient's waist size is reduced by 1.5 to 2.0 inches.

While Liposonix sounds like a niche product, it isn't -- it's just one of several non-invasive fat reduction products on the market today. One popular procedure in the market is Zeltiq's Cryolipolysis technology, also known as "CoolSculpting." The procedure uses a similar approach to Liposonix, but freezes fat cells instead of disrupting them with ultrasound waves. The dead fat cells are eliminated in a similar fashion, and it also requires 8 to 12 weeks for a similar waist size reduction.

Solta has a bigger but slower growing footprint in the industry than Zeltiq. Last quarter, Solta's revenue climbed 6% year-over-year to $111.3 million, while Zeltiq's revenue surged 64% to $29.5 million.

However, I believe that Valeant's marketing muscle will give Solta's Liposonix a shot in the arm to match Zeltiq's growth. Both companies generate a large portion of their revenues from North America (46% for Solta and 80% for Zeltiq), so there is still plenty of room for overseas growth.

Therefore, I believe that Zeltiq, which has already rallied more than 350% over the past 12 months, could eventually face heavier domestic and overseas competition as Valeant pushes Liposonix into other new markets.

The Foolish takeaway
In closing, Valeant's growth over the past few years has made this company a force to be reckoned with on multiple fronts.

In the coming year, I believe investors should keep a close eye on Valeant's inorganic growth in cosmetics, dermatology, and generics to see if its efforts will eventually encroach on markets previously controlled by companies like Allergan, Actavis, and Zeltiq. If so, then I expect Valeant to continue rising throughout 2014.

Leo Sun has no position in any stocks mentioned. The Motley Fool recommends Teva Pharmaceutical Industries and Valeant Pharmaceuticals. We Fools may not all hold the same opinions, but we all believe that considering a diverse range of insights makes us better investors. The Motley Fool has a disclosure policy.